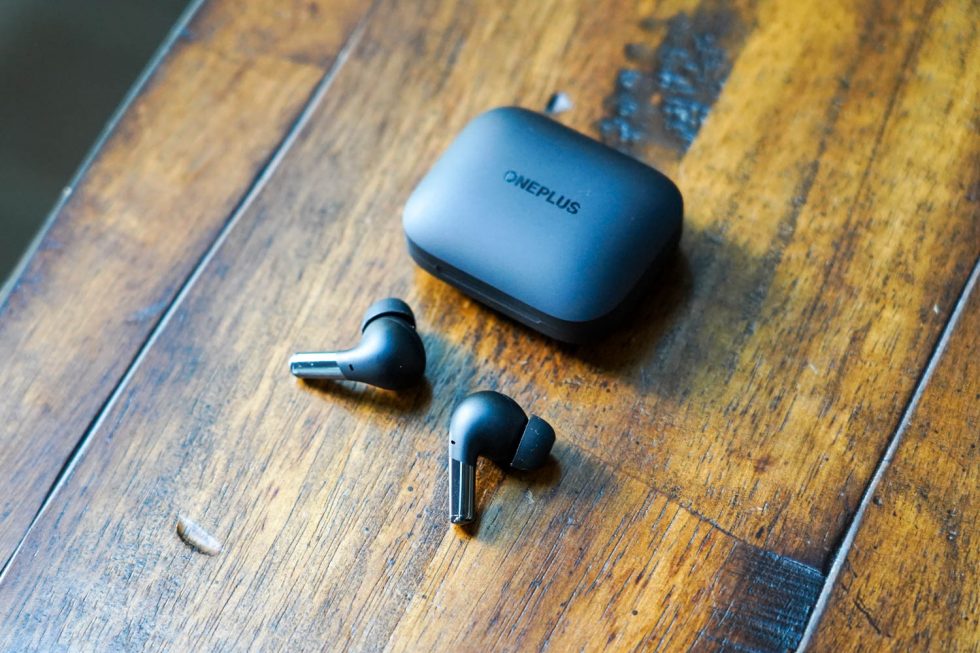 OnePlus has become much more than a phone company at this point and now dips their toes in all sorts of electronics segments. From TVs to “smart” watches and audio products, if you are looking for mostly-affordable accessories that often tick a lot of boxes, OnePlus has developed quite the catalog to choose from.

I’ve been wearing a black pair off and on over several weeks now, trying to decide if this is the ultimate pair of earbuds of the moment that I’ll stick with going forward. Let’s talk about the OnePlus Buds Pro. 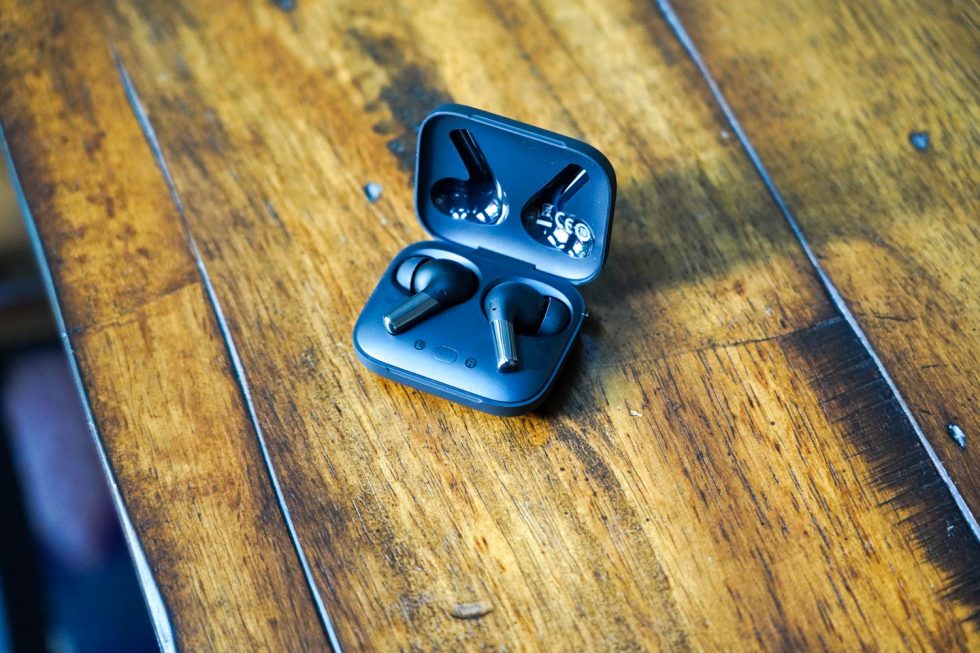 What are the OnePlus Buds Pro?

To quickly recap, the OnePlus Buds Pro are a pair of true wireless earbuds that cost $149.99 and come in black or white. They are the first from OnePlus to feature Active Noise Cancellation (ANC), which OnePlus says is “smart” enough to block out your surroundings with a 3-mic setup that “actively filters out noise levels of up to 40dB.”

They can hold up to 38 hours of battery life through the charging case and earbuds, but you’ll typically see around “5 hours or so” of use when actually wearing them and listening to music. The included case has Warp Charge, so it’ll charge quite fast when wired, plus it’ll wirelessly charge too.

OnePlus will let you customize some of the sound settings for the Buds Pro using a built-in audio app on OnePlus phones or the HeyMelody app on non-OnePlus phones. I’ve been testing on a Pixel 5 and Galaxy Z Fold 3, so you’ll see that HeyMelody app here.

We’ll start right off with the most important piece and that would be how the Buds Pro sound. I tend to think the audio here is mostly good, even quite impressive at times.

Once you get a proper fit, crank ANC to full, and run the OnePlus Audio ID test, you’ll get the best overall experience. The Audio ID test provides a sound boost that brings the sound from bleh to pretty good. That said, I’ve found these earbuds to be hit or miss depending on the song.

On a live track, like Gary Clarke Jr.’s When My Train Pulls In, nothing about the sound gives you the feeling like you might be in that crowd. It’s not that the Buds Pro can’t hang onto a guitar solo, but the soundstage is lacking somewhere. I’ve been trying to pinpoint it for hours, but all I can come up with is that the tuning from OnePlus is the typical heavy-on-the-bass design to wow you with the booms.

As an example, I try to play The Weeknd’s High For This every time I test earbuds because when it drops, there are few that survive. The Buds Pro actually shine a bit on this song! I threw other hip hop at them too (plenty of Drake, Travis Scott, J. Cole, my usuals) and they perform just fine, even excellent.

But then in a bit of a contradictory note, Jeff Buckley’s Last Goodbye is so clean on these, as is Everybody Here Wants You. So maybe just don’t listen to live rock? I don’t know.

What I’m getting at is that the OnePlus Buds Pro certainly have many moments where you go, “God damn these are good buds that are easily worth $150.” Other times, you wonder what’s up. They most definitely destroy Google’s Pixel Buds, for those wondering, and are a solid competitor to the Galaxy Buds Pro.

As for the ANC, it’s solid. If you want to disappear into song, you can do that. I didn’t find a lot of variation between ANC off or transparent and ANC on, I just found that with a proper seal and a mid-range volume and up, these were blocking most sound. 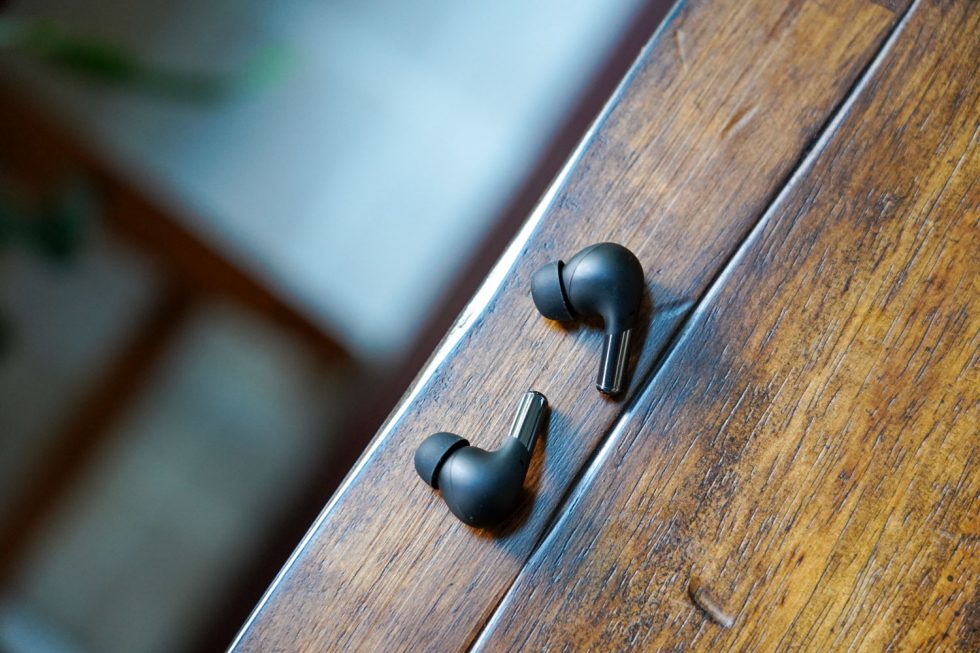 Just being straight with you here, but the OnePlus Buds Pro are my least favorite style of earbud. I’m not referring to the dangly pieces that Apple made famous – I think the Buds Pro look great – but the actual ear fitting. To properly wear these types of buds and get a seal in your ear that can really push the sound you might want, you have to ram these suckers in there. It brings a level of uncomfortableness that usually makes me snatch them out of my ear within 3 minutes, drop them in a case, and never take them out again.

With the OnePlus Buds Pro, they seem less intrusive than other buds of this style. In other words, I’ve worn them for extended periods of time and don’t actually mind the fit. They are light enough, squeeze deep enough in my ears without them feeling violated, and don’t stick out so much that I’m self-conscious of their goofyness.

Overall, the Buds Pro are a quite comfortable set of earbuds that can be worn for long audio sessions without giving you ear fatigue and they look pretty damn slick. I even took them on a couple of runs and they mostly stayed put, though they did fall out once in the middle of a busy street. I saved them, thankfully.

I’ve talked about this in other earbud reviews, but I’m not the guy who wears earbuds for 8 hours a day. I work out of a home office, have had my travel cutoff by a pandemic, and typically only throw in buds when I’m working out in my garage or out on a run. Otherwise, I’d be that a-hole dad who puts in earbuds to try and break away from my kid and wife. I don’t want to be that guy.

Soooo, my sessions tend to last anywhere from 40 minutes to two hours and then they go back in a case. That was how I tested the OnePlus Buds Pro, and since they have 5-hour rated battery life out of the case, I most certainly did not kill them during a session. That means I used them for an hour or so, knew battery life was fine, dropped them in their case, let them re-charge, and then used them again without worry the next day. Battery life on these is fine if you aren’t needing a pair of buds in your ear for 5-7 hours straight.

As for the charging case, I think I’ve needed to re-charge it once during my couple of weeks of testing. It holds a lot of battery.

As I mentioned above, I’ve been using the OnePlus Buds Pro with a Pixel 5 and Galaxy Fold 3, so that forced me into using the HeyMelody app to get full controls. This app shows you the charge state of each bud and the case, lets you update firmware, change ANC settings, turn on a Zen mode to listen to white noise, and run a hearing test to give an audio boost that OnePlus calls “OnePlus Audio ID.”

There isn’t anything special to the app or software, but one thing you have to do is run the OnePlus Audio ID test. Once completed, you get a major boost to the audio performance. Without it, the Buds Pro sound pretty flat and lifeless. 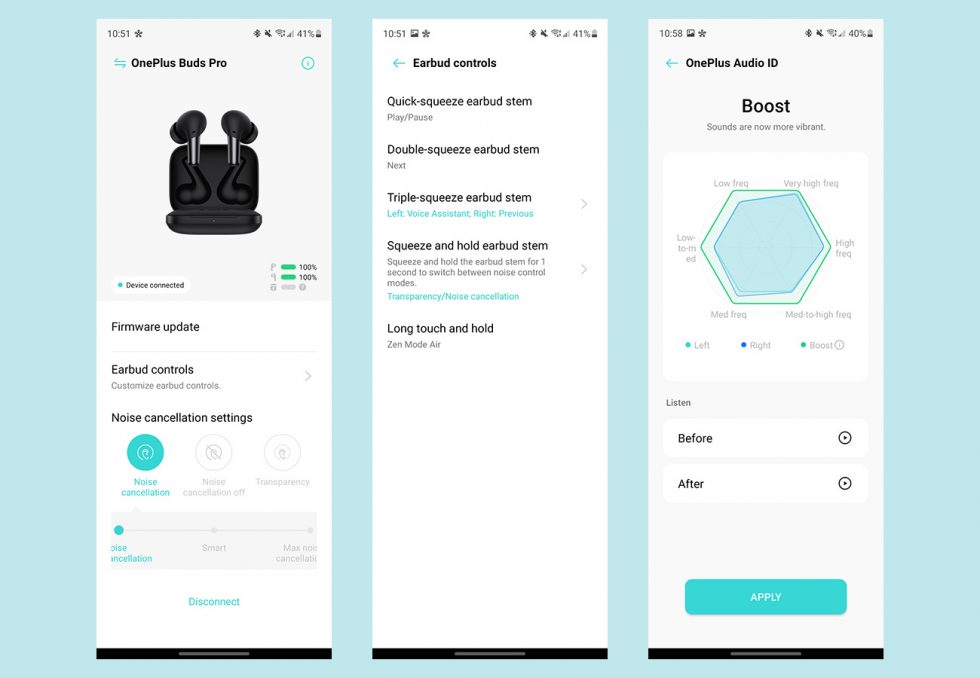 The app also gives you a handful of choices to control the Buds Pro with squeezes. Yes, that’s right, you control the Buds Pro by squeezing the dangly ear tips, not by just tapping or gesturing on them. It took some getting used to, but I kind of like it when it works. A single squeeze pauses or plays, double squeeze goes to next track, and a triple squeeze can do voice assistants or previous tracks. The squeeze-and-hold can change ANC modes. Most of those functions can’t be changed, so you better like and learn to use OnePlus’ way.

I do wish the app had an equalizer or a set of audio presets, something. Instead, you just get the boost from the Audio ID, controls over ANC, and that’s it. Now, a lot of phones have built-in equalizers, so you may not care and you can often control those settings anyway. Still, it would be nice to have it all in one place.

This may not say much, since the last couple of releases weren’t award winners, but this is the best pair of OnePlus earbuds by a long shot. The OnePlus Buds Pro can produce robust sound, have typical battery life with fast charging to boost it, and provide a comfortable enough fit to wear for hours. I think they look incredible in a sea of same fish and are priced to compete even if OnePlus didn’t do their old trick of substantially undercutting the competition. 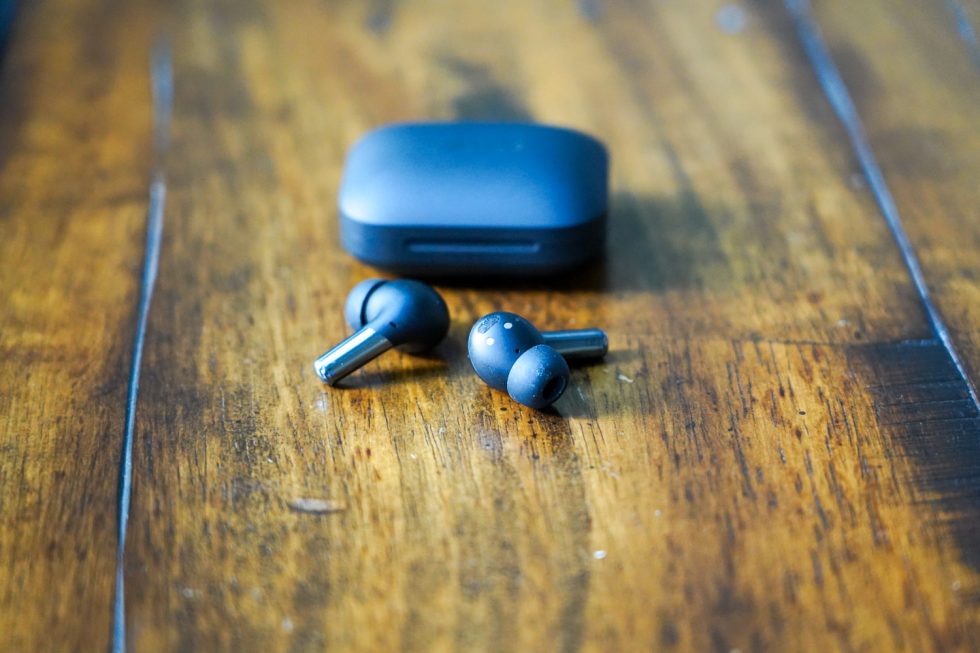