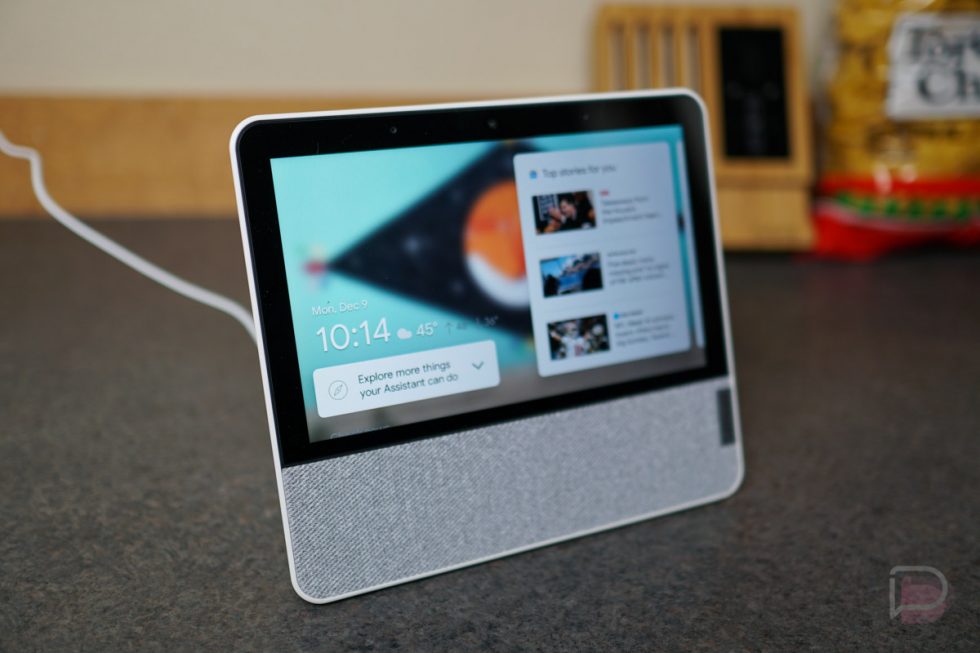 Whether you’re looking to outfit your home with its first piece of Google Assistant-powered smart home tech or you already have Nest Minis and Google Home devices scattered throughout the house, the $99 Smart Display 7 from Lenovo is a great addition to the lineup of products available to those who love having quick access to Google’s services.

I’ve had the Smart Display 7 in my kitchen for the past week and a half. It replaced my original Google Home that I’ve had since launch, so this post will mainly discuss the differences and advantages of having a display to look at versus only having a speaker. Let’s get to it. 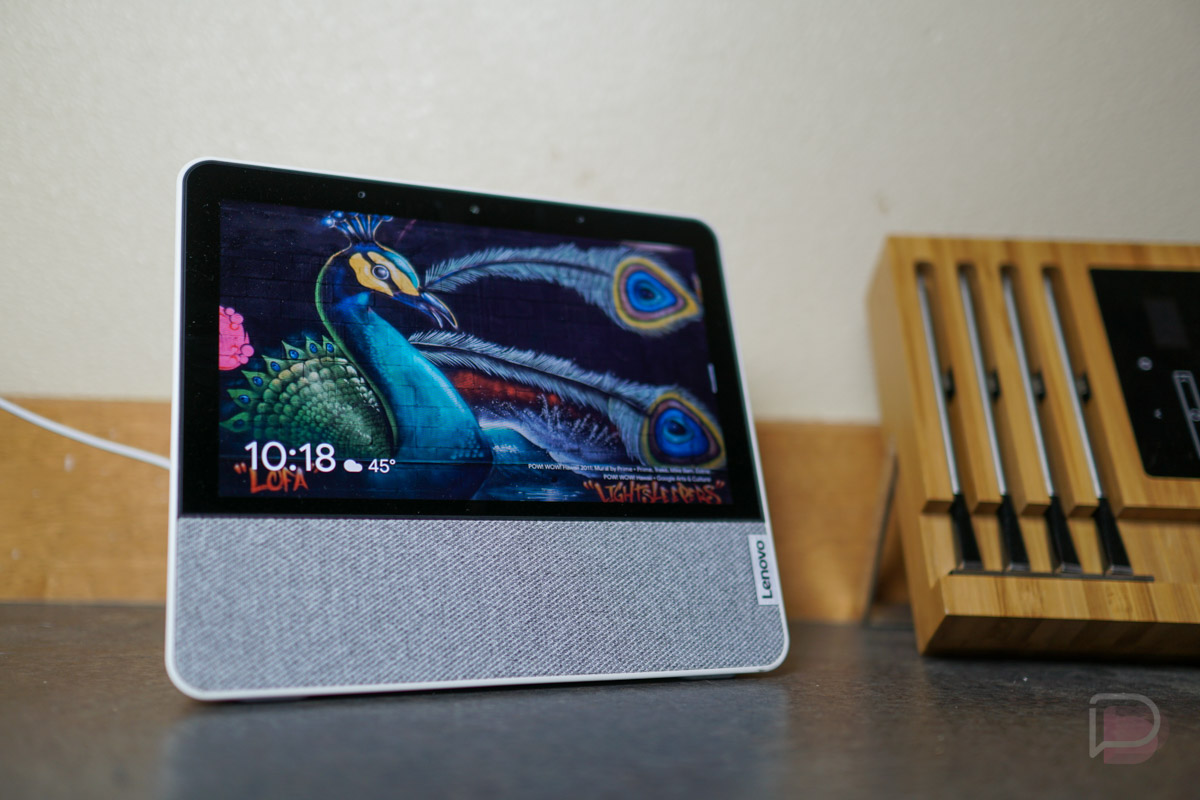 Having a display is cool

Since I’ve only ever had a smart speaker in my kitchen, it’s been really nice having an actual display to look at. The biggest example I can provide is for kitchen timers. For example, when you only have a speaker, a lot of times I have to say, “Ok Google, how much time is left on the timer?” I’d then get a response. However, with the display, as soon as you set the timer, the time is shown on the display. That’s clutch.

Also, depending on how your home is configured, you may not have a view to your living room TV from the kitchen. That’s my struggle. Having a display in the kitchen means I can cast video to the “Kitchen Display” to ensure I don’t miss an important play of the game while doing dishes or making grub. Again, this is clutch. 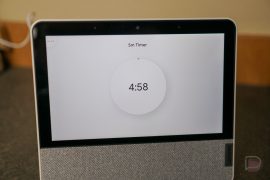 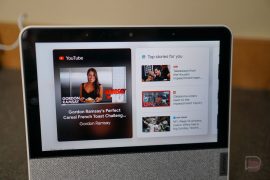 Here are the specs

This smart display’s specs include the 7″ display, though, its resolution is nothing to write home about at 1024 x 600. At 7″ the somewhat low resolution probably isn’t going to bother you. Other specs include a MediaTek 8167S processor, 2MP front-facing camera, dual-band WiFi, and a dual speaker setup. For software, you have the same Google Assistant-powered experience that you’ll find on other smart display devices. It’s been improved upon a bit from its initial release which we’ll go over right now.

While this is the first smart display I’ve had in the kitchen, it’s not the first I’ve had in my home. I’ve had an original Lenovo Smart Display in my office since those launched, and when I’m not casting YouTube videos to that, I use it as a live picture frame. Basically, those two tasks are what these smart displays are best at when in an office setting, but now that I have one in the kitchen, I’m seeing a lot more advantages to having one. For cooking, quick access to recipes and cooking videos is extremely helpful, plus that previous mention about the viewable timers.

On top of that, casting music/videos, controlling smart home things, and keeping in touch with family via Duo is just too easy with Google Assistant and the built-in Google Cast tech. Google and company have been somewhat slow to roll out a bunch of new features to the smart display platform, but what they have added and improved upon is all good stuff. Recent updates have included new voice controls for switching where media is currently casted, ability to yell “STOP!” to shut off timers and alarms, plus improved smart home controls. 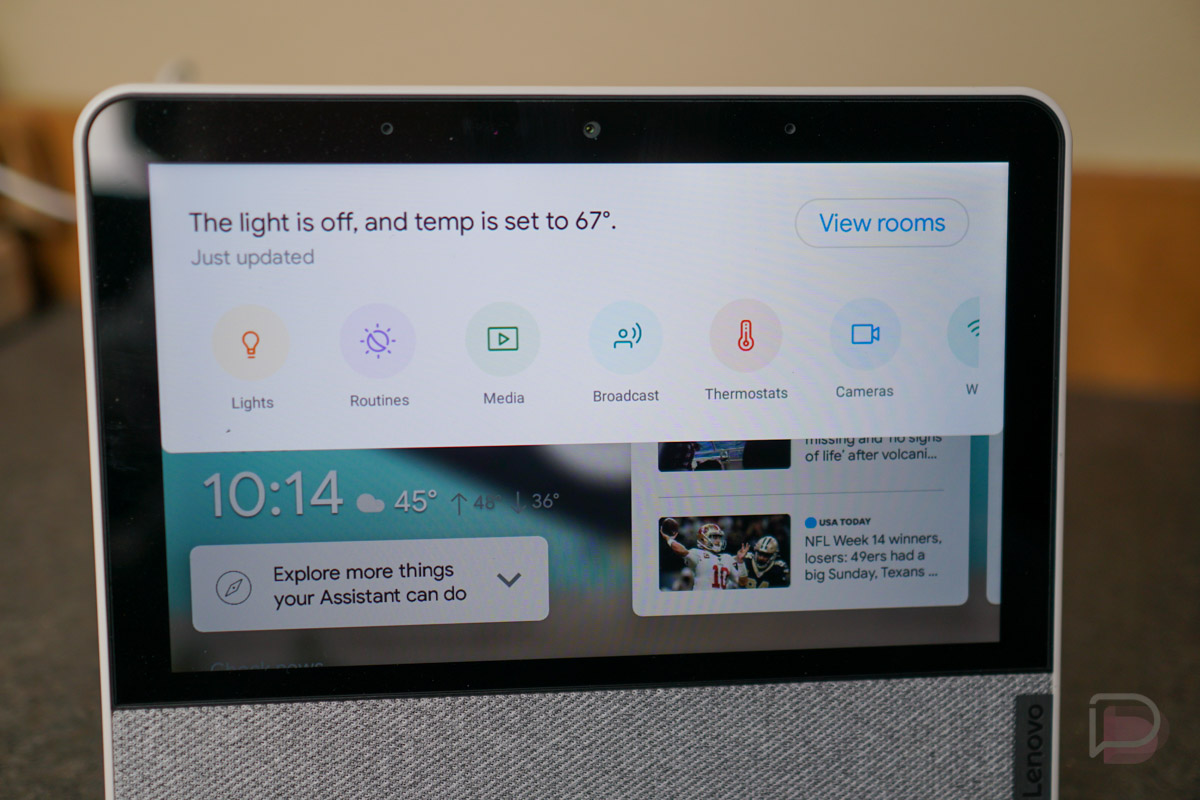 When it comes to onboard controls, if you’ve never used or seen a smart display in action, it’s all about swipes from the display edges. From Home on the Smart Display 7, a swipe up from the bottom accesses your display’s brightness, sound, Do Not Disturb, alarms, and other device info/settings. A swipe from the right to the left brings up news stories and weather info. A swipe right from the left dims the display to just a clock. Lastly, a swipe down from the top brings up smart home controls. You can access lights, routines, media, thermostats, broadcast, cameras, and basically everything else.

Lenovo switched up the design of this Smart Display 7 quite a bit from the original 8″ and 10″ models. Sadly, they removed all of the bamboo backside, and if we’re being honest, this smart display looks a lot like something you’d find from Google and Nest. It has the grey cloth covering up the speaker setup, plus a plain white body. It’s extremely basic, but with that basic/minimal look, it can pretty much look fine in any room or on any shelf throughout the house. 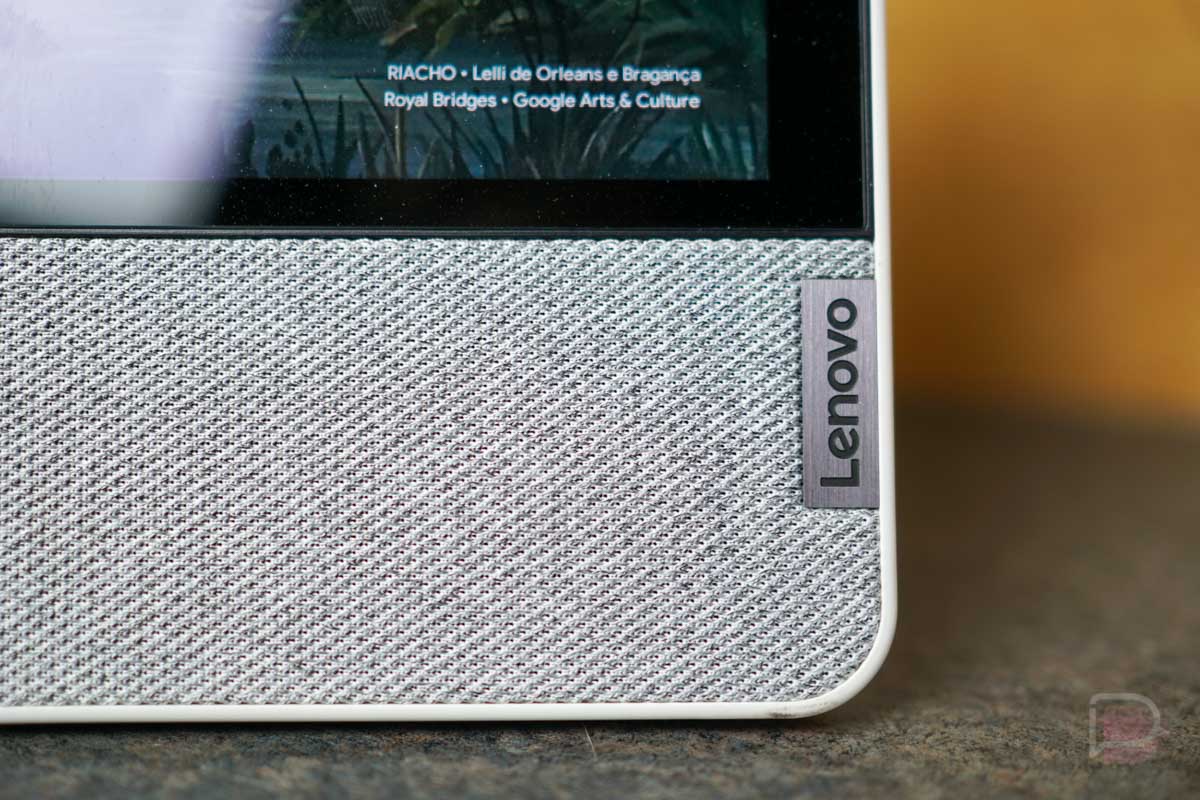 If I had to find something wrong with the device, I’d have to go with the overall sound. It’s pretty poor, at least when compared to a set of high quality speakers. To sum it up, music sounds very thin with not much low end, and even when not at full volume (7 out of the 10 max), there can be quit a bit of distortion from the speakers when listening to certain types of music. I can see the speakers and audio quality not being a huge deal for many, but as someone who needs decent speakers to digest the type of music I listen to without getting a headache, Lenovo appears to have cut some costs in this department.

If you don’t foresee a lot of intense music being played at high volumes on your Smart Display 7, it will likely treat you just fine. All of my test calls, interactions with Google Assistant, and low volume playback of mellow music all sounded fine. This negative is probably going to reflect heavily on the user’s usage and not so much the hardware, but at $99 price, I suppose you get what you pay for. If you need better audio and a display, there’s the Nest Hub Max. 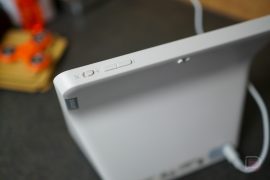 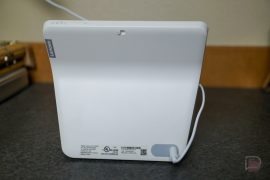 Is a 7″ display big enough for you?

This isn’t much of a negative at all, but a question you should really ask yourself before picking one of these smart displays up. Is a 7″ display big enough for the space you’re putting it? I have mine in the kitchen, but it’s on the counter somewhat far away from my stovetop and sink. I do this for safety because I’d hate to splash water or hot oil on it. Because of this placement, the display seems very small when looking at it from a distance, so I’d opt for a larger 10″ display to compensate for that. It would be much easier on the eyes when watching videos or looking at recipes/timers. Your kitchen probably isn’t like mine, so the 7″ could be fine.

The point is, feel free to take a tape measure, get out 7″, then place it diagonally on your counter or wherever and see what you think. 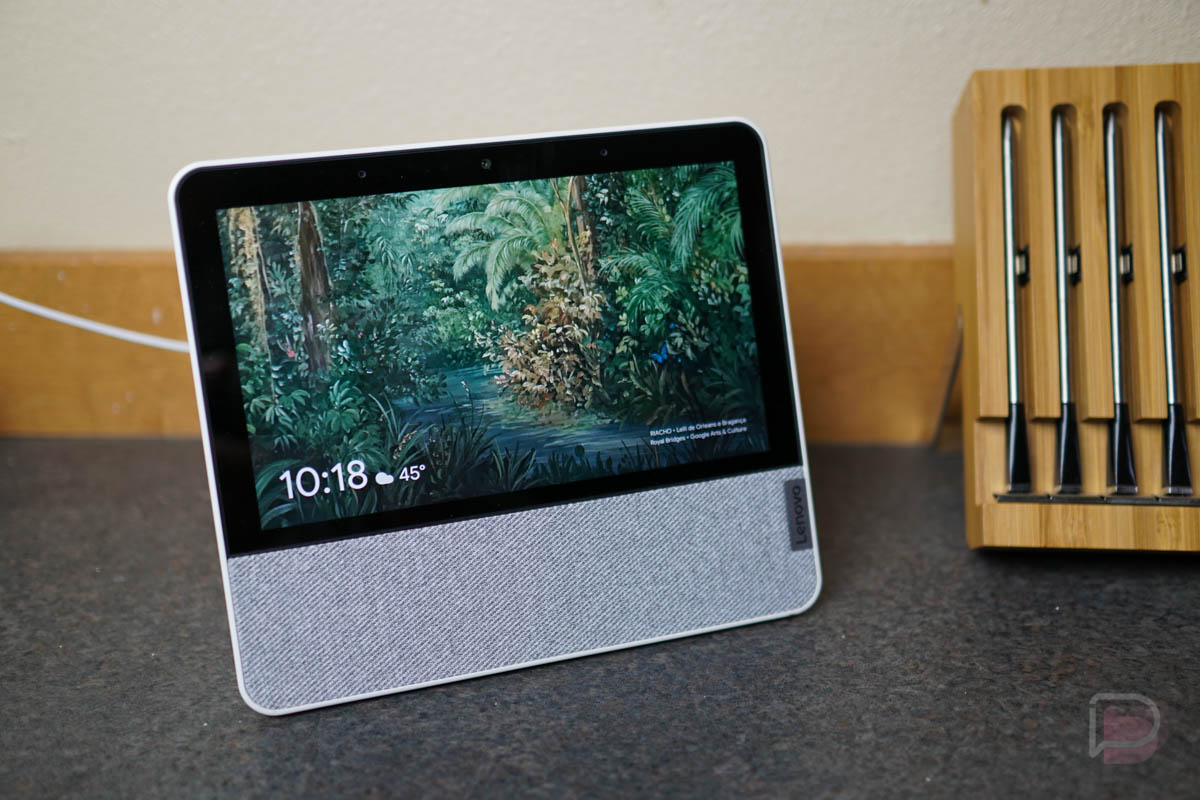 Should You Buy One?

This product has been listed at $99 since it first showed up online in November. It’s list price is $130, but if Lenovo and retailers are going to continue selling it at $99, this product is close to a no-brainer. The only thing to consider, if the Google Assistant platform is what you really want, is Google’s own 7″ Nest Hub device that is currently at $79. Google’s sale won’t last forever, but when it comes down to it, the experience on both devices is incredibly similar, so I don’t think you can make a bad choice in choosing one or the other.