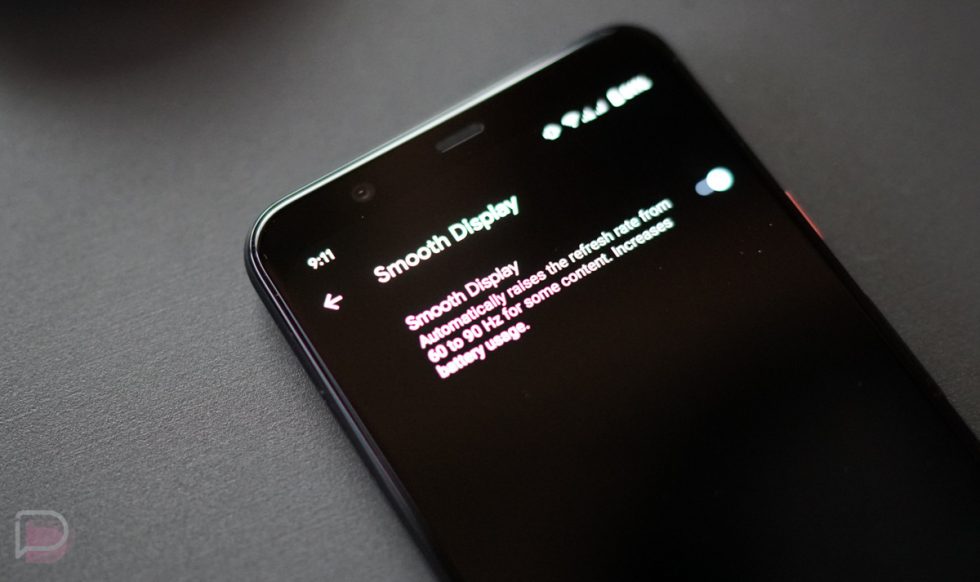 Update (10/23): Google has acknowledged the issue and says it’s working on an update to address it. Speaking to The Verge, Google provided the following statement.

We designed Smooth Display so that users could enjoy the benefits of 90Hz for improved UI interactions and content consumption, while also preserving battery when higher refresh rates are not critical by lowering back down to 60Hz.

In some conditions or situations, however, we set the refresh rate to 60Hz. Some of these situations include: when the user turns on battery saver, certain content such as video (as it’s largely shot at 24 or 30fps), and even various brightness or ambient conditions. We constantly assess whether these parameters lead to the best overall user experience. We have previously planned updates that we’ll roll out in the coming weeks that include enabling 90hz in more brightness conditions.

Google’s reasoning for toggling back to 60Hz automatically makes perfect sense, though, the last bit about already having plans for updating Smooth Display to work in more brightness conditions is odd. As consumers, it would be cool to know these things right out of the gate, instead of having to find out about it via reddit which then causes unnecessary PR drama for Google.

Either way, an update should arrive in the “coming weeks” for Pixel 4 and Pixel 4 XL owners.

Outside of the regular Pixel 4’s poor battery life, are you ready for the first bit of drama for Google’s new phones?

The Pixel 4 and Pixel 4 XL both have 90Hz OLED displays that Google is calling “Smooth Display.” With Smooth Display enabled, Google states that they will automatically raise the refresh from 60Hz to 90Hz “for some content,” and that when enabled, there will be an increase in battery usage.

For days now, I’ve been trying to figure out why I can’t seem to keep a steady 90Hz experience without forcing 90Hz to be always-on in developer settings. At times, Twitter looks great for a moment when scrolling and then all of a sudden flips back to the stutter of a 60Hz display you notice after being on multiple 90Hz phones in a row (7 Pro, 7T, and Pixel 4).

Tonight, someone at reddit figured it out. It appears that Google may not just be automatically refreshing that frame rate based on content, but has instead tied 90Hz to the brightness of each phone’s display. If you jump over to a site like www.testufo.com where a browser test will tell you the frame rate of your display in real-time, you can test this for yourself.

Grab your Pixel 4 or Pixel 4 XL brightness slider and drag it up past the 75% mark. That website above should bring back 90fps and 90Hz. But if you drop it anywhere below that 75% mark, it then drops to 60fps and 60Hz.

I’ve tried it on both a Pixel 4 (review unit) and Pixel 4 XL (retail unit) and am getting the same results. Additionally, if you go into developer options and toggle a setting that lets you force 90Hz at all times, the frame rate drop no longer happens with brightness adjustment. And for further proof, XDA’s Mishaal Rahman checked a logcat with ADB and confirmed that at lower than 75%, the system is switching to 60Hz from 90Hz.

So to recap, the Pixel 4 and Pixel 4 XL have 90Hz displays that only show 90Hz when their brightness sliders are 75% and beyond. Should you drop the brightness lower, the refresh rate backs down to 60Hz.

For comparison, I also ran a similar test on my OnePlus 7T and it holds 90Hz the entire time, no matter the brightness. If you want this specific browser test to show anything lower than 90Hz, you have to toggle 90Hz off.

What’s the takeaway here? Umm, it kind of sucks, if I’m being honest. 75% and above is a brightness I’m not sure I hold on a phone for long periods of time. That’s bright! When indoors, I’m not sure you need your phone cranked that high very often, so should you regularly drop to below that, you won’t get the “Smooth Display” experience that might have drawn you to a Pixel 4.

Could Google tweak that to widen the range of brightness that holds 90Hz? Sure. You can also go into developer options, as I mentioned above, and force it on at all times. But it’s obvious that Google didn’t want 90Hz on at all times because they were worried about battery life. I’m not sure what the solution is here. I certainly want 90Hz when I’m using this phone, but do I want to take a hit on battery life that is already not great?