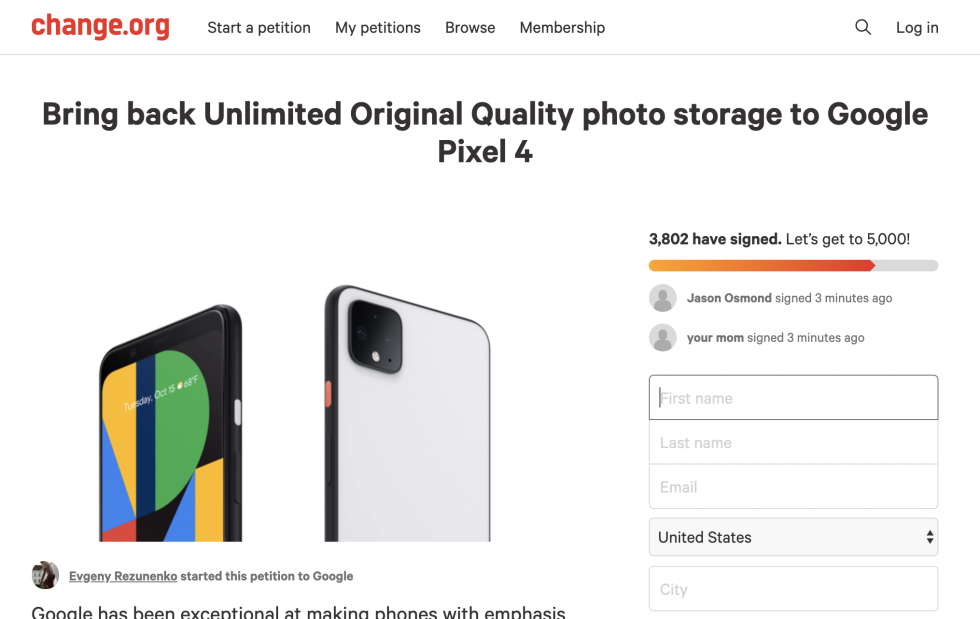 Shortly after Google unveiled the new Pixel 4, it was noted on the device’s listing page that it would not include unlimited Google Photos storage for original quality photos. Instead, Google is offering unlimited “high quality” backups. This, of course, differs from what the company has done in the past.

Naturally, potential Pixel 4 buyers have been upset by this move, and really, no one should blame them. Google has long touted the cameras found on Pixel devices, and having a place to store all of your fantastic photos seems like it’d be a good thing for Google to offer buyers of its flagship phone.

In the petition’s description, the organizer states the following.

Google has been exceptional at making phones with emphasis on photography. Aside from an excellent camera, one of the main buying points was the unlimited Google Photos storage in Original Quality included for free with the flagship Google Pixel phones.

With the latest iteration, Google decided to remove this perk, making the Pixel 4 much less enticing compared to its counterparts. While Google tries to leverage the superb photography capabilities of its new flagship, it appears to be an even more hypocritical and cash grabbing move to not let users utilise their photo storage service as a part of the offering.

Without taking this move too seriously, I’m with the consumers on this one. The unlimited photo storage at the original quality was a legit perk for Pixel owners. It’s possible Google was somehow losing money on this offer, but at the cost of getting people to buy their phones, it seems like a worthy tradeoff.

If you want to join the petition, even though odds are it could have very little effect on what Google does, follow the link below.