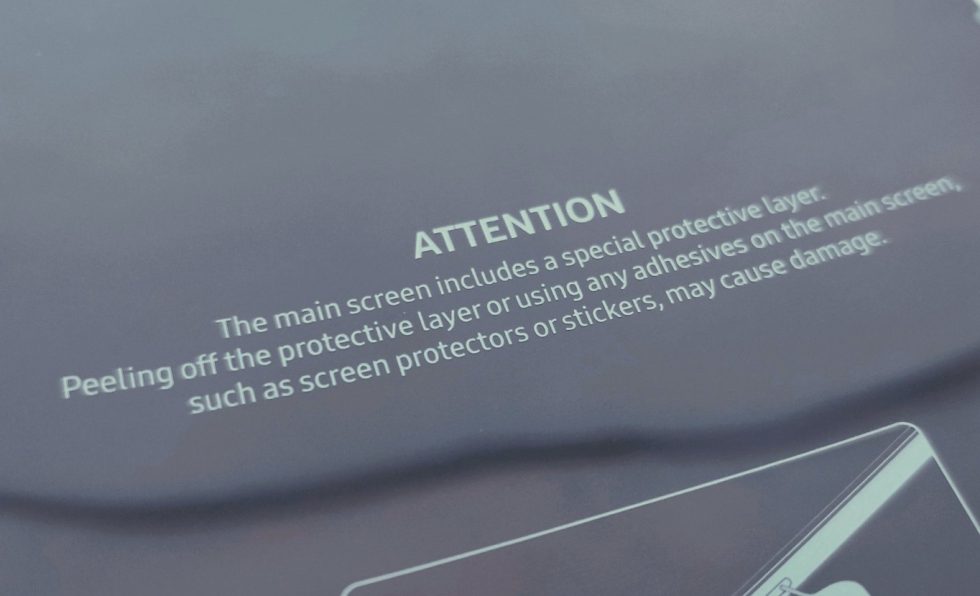 A batch of Galaxy Fold review units have broken within a matter of days, as you know from a story we wrote up this morning. Not all have suffered from the same issue, though. Two of the units might have died from self-inflicted wounds, after reviewers removed (or attempted to remove) a special protective layer that Samsung applied to the Fold’s screen.

The Galaxy Fold, in all of its fancy $2,000 packaging, arrives in the box with a protective wrapper around the device along with another protective layer applied to its foldable display. On the outer wrapper, Samsung has included a warning that suggests owners not remove the protective layer.

T-Mobile’s Des showed a picture of this warning in a Tweet today, shortly after all Galaxy Fold hell broke loose. Both Mark Gurman and Marques Brownlee, whose devices had to be replaced, confirmed that their Galaxy Folds ran into issues once they messed with the protective layer that Samsung warned about.

Dear future #GalaxyFold owners, I know I always say "No one ever read the instructions"… PLEASE READ THIS ONE!!!

(This is the wrap over the screen of the Galaxy Fold) pic.twitter.com/LuQPRfDZIE

If you pre-ordered a Galaxy Fold and haven’t cancelled it yet after today’s troublesome news, be aware of this issue. The protective layer on the Galaxy Fold’s unit supposedly looks like a screen protector that you might be able to remove. You shouldn’t remove it. Samsung’s own warning over it doesn’t exactly say that imminent death will arrive to your really expensive phone if you scrape it off, but that’s clearly the case here.

Samsung should probably update the wording on their packaging, remove the word “may,” and replace it with “will.”