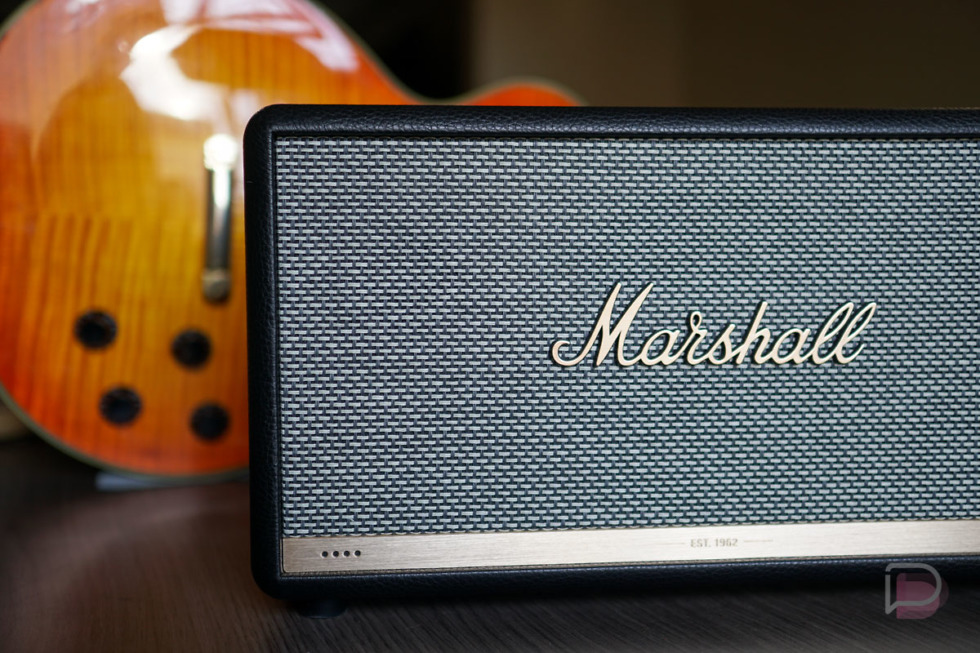 Marshall’s Stanmore II Voice smart speaker has been available since mid-December, priced at $399. You may be thinking, “Holy moly, $399 for a smart speaker? Tim, you crazy!” Usually, I’d be right there with you, but considering Google has its own $399 smart speaker in the Google Home Max, and Kellen seems to like his just fine, I don’t feel bad about loving this thing so damn much and recommending it.

A bit of background for you, I have had a standard Stanmore II in my office for years now, back from when they first launched. I’ve basically used it every day since then, simply because I love the look of it, the sound, and the Marshall brand is something that has resonated with me ever since I was a little kid and introduced to people like Jimi Hendrix and Slash. A Marshall amplifier was the first guitar amp I ever bought and I consider myself a creature of habit.

A bit more background for you, the Marshall speakers and headphones you have seen over the years are not produced by Marshall the amp-maker. Instead, a global licensing deal between Marshall and Stockholm-based Zound Industries allows Zound to design, develop, manufacture, and market headphone and speaker products under the Marshall brand. A renewal of this deal was struck last year, ensuring Zound will be making Marshall-branded goods until at least 2033.

Now, onto the Stanmore II Voice smart speaker itself. 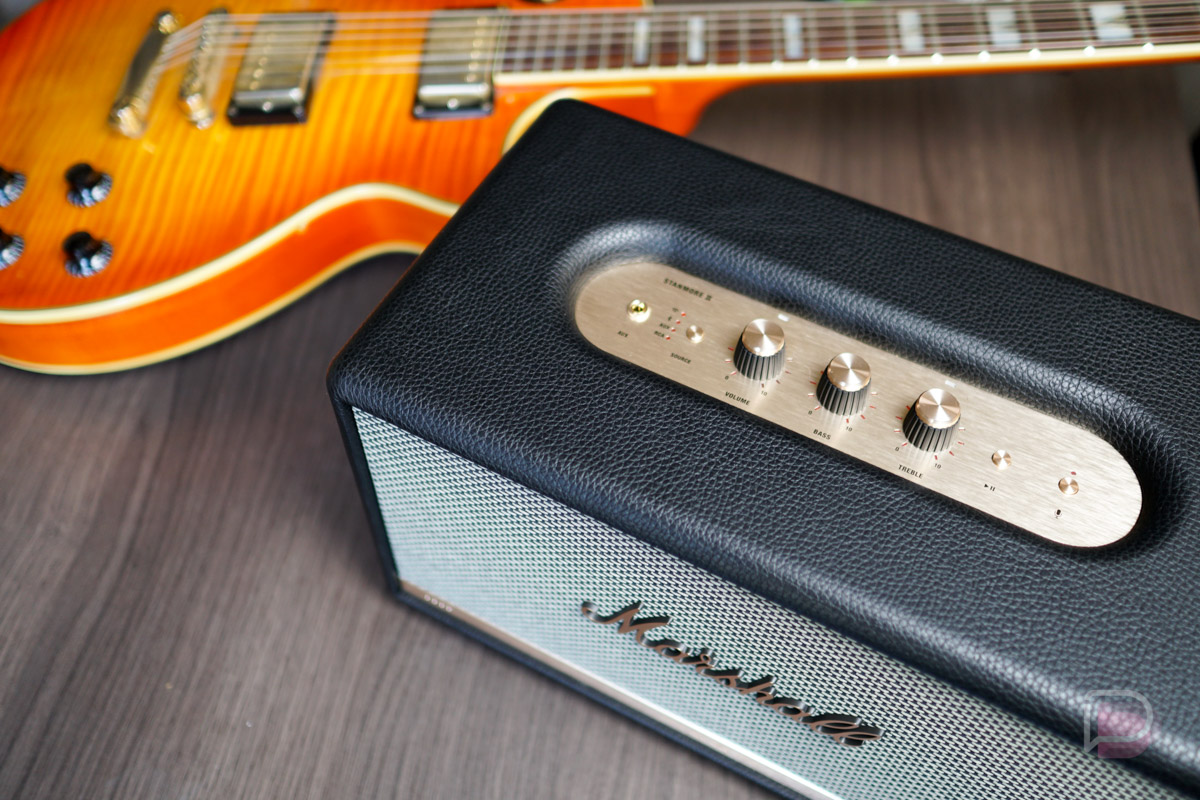 What good is a $399 speaker if it sounds like crap? Thankfully, I’ve done nothing but enjoy the sound coming from the Stanmore II Voice. What I appreciate about this speaker’s design over something like Google Home Max with regard to sound is the ability to tweak the sound how I see fit with the tone knobs, just like those found on an actual Marshall amplifier. There is a dedicated knob for volume, treble, and bass. Since I listen to a lot of bass-heavy music, I always have that bass cranked up to 10 while I ease up on the treble a bit, unless I’m listening to something a bit more vocal focused. The point is, just having the ability to hone in the sound you want is nice. The knobs themselves feel so damn good when you turn them, too. There’s a slight resistance to them, which makes the whole tone tweaking experience feel very premium.

The speaker is of course designed to stream music over WiFi using Google Assistant and Google Cast from whatever service supports it (I mainly use Google Play Music), but the speaker also offers a 3.5mm input for direct tune jamming, Bluetooth for wireless head banging, as well as RCA inputs. When compared to others, it’s a very versatile speaker in terms of playing along nicely with whatever you’re attempting to play music from. 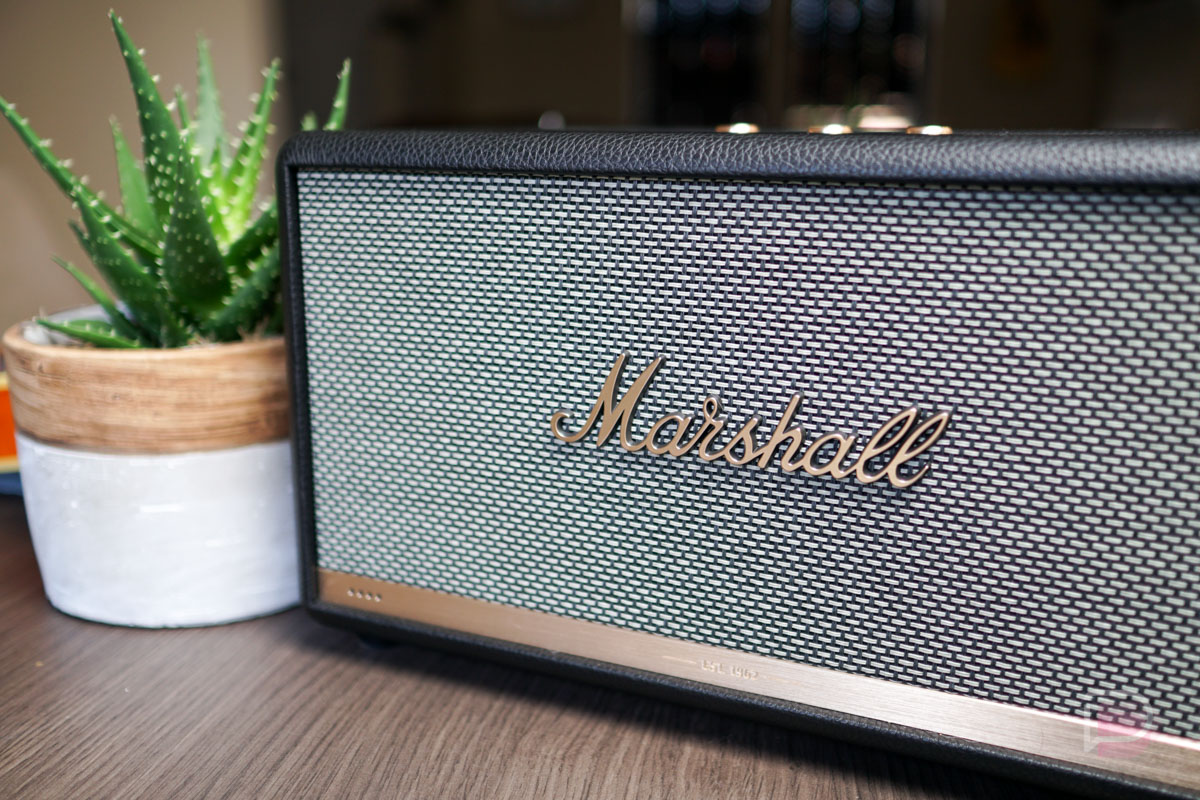 The speaker looks like a Marshall combo amp, which is a speaker and amplifier built into a single piece. As a musician, it turns me on. On top of the speaker, the use of brass finishing and bold black lettering can easily take you on a trip down memory lane if you’re familiar with Marshall hardware and the fit and finish of everything oozes luxury and sex. Sorry if this is getting NSFW. On the front you have a tightly woven material, much like the speaker grills found on a Marshall amp. Again, everything about this smart speaker screams Marshall, so if you’re a fan of the brand, you’ll be a very happy camper.

One of the things differentiating Stanmore II Voice and the old Stanmore II are the four circular lights on the bottom frontside. These are the Google lights, which are usually off unless you’re speaking with Google Assistant. When activated with the “Hey Google” or “OK Google,” you’ll see the the lights shine in a nice White glow. 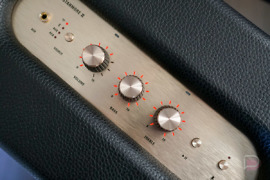 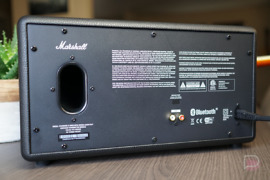 Back to those tone knobs I mentioned earlier, they have also been upgraded from standard black lettering stickers to red LEDs. There’s an LED for each notch of volume and tone, 1 through 10, making for a pleasing aesthetic when you’re messing with them.

Naturally, a large Marshall logo in the well-known cursive lettering is on front, along with an Est. 1962 marking on the bottom frontside. 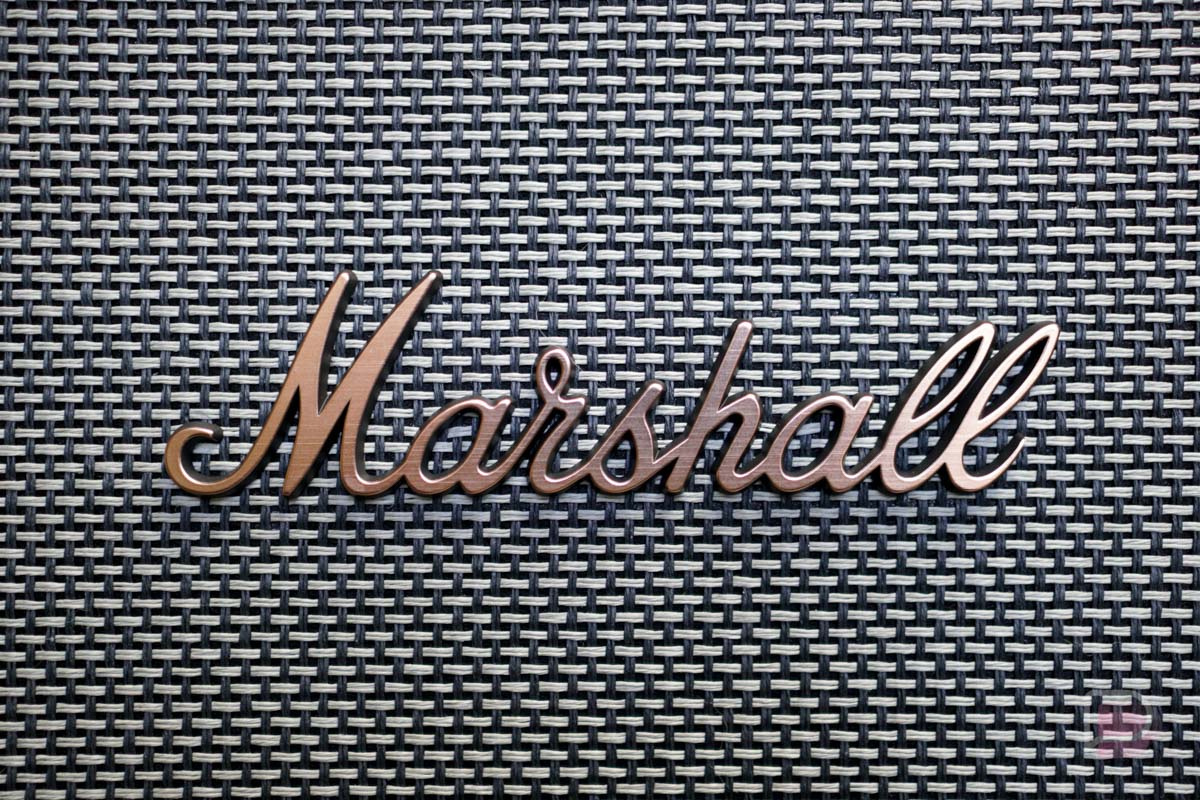 With Google Assistant built directly into the speaker, it’s designed to stream tunes from any supported service, such as Google Play Music, Spotify, and others. You can also control plenty aspects of your smart home as well, just like you can on any Google Home or Assistant-supported device.

Setting it up is ridiculously easy, too, thanks to the Google Home app. When you plug it in, open the app, you’ll see it appear in there for set up, then you’re off to the races. You can also add it to any existing speaker group in your home, making for a very entertaining night at home. 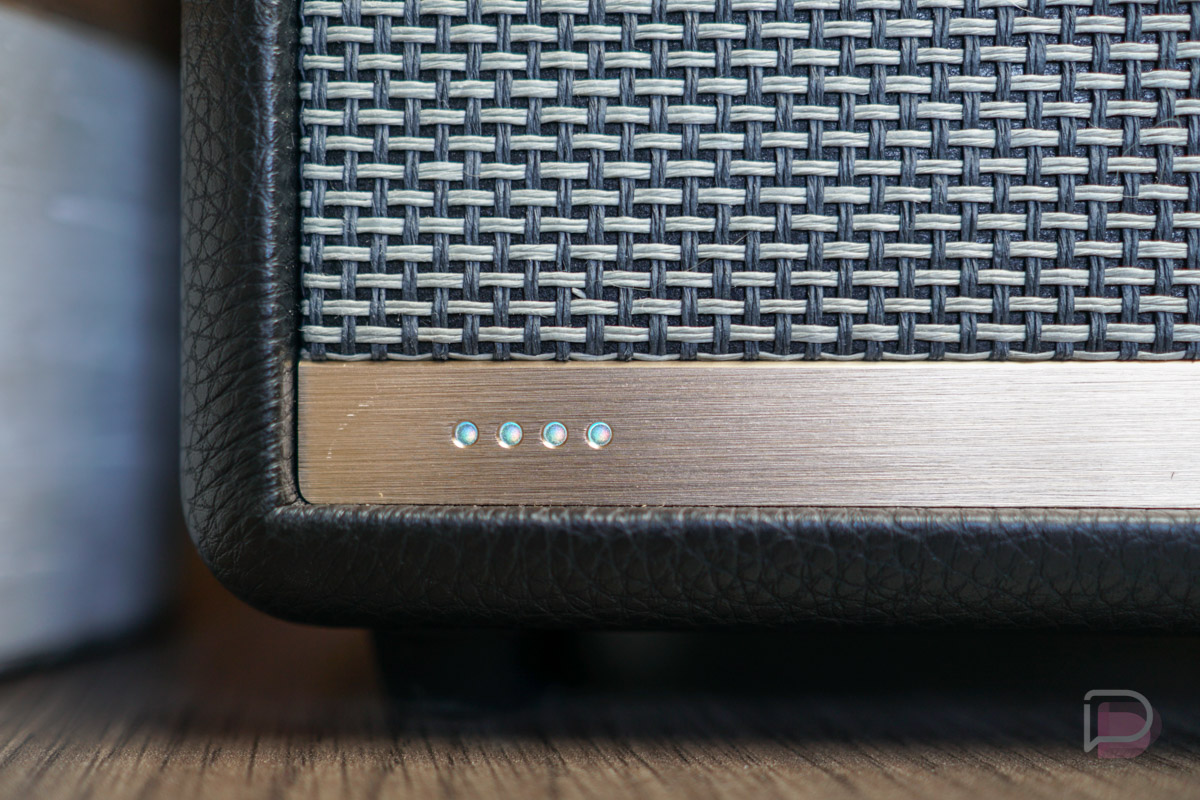 Marshall states that the speaker has a dual microphone array with acoustic noise cancellation for far field voice interaction. After my testing, the mics pick up my voice through music that is playing fairly well, unless you have the speaker really loud. Since this speaker does get quite loud, I probably ended up with more missed “Ok Google” hotword commands than you will. When at a reasonable volume, the speaker has hardly any issue hearing you, so I’m happy to report that.

I get it, $399 is crazy, but if you were thinking about picking up a Google Home Max or something similar, may I recommend the Stanmore II Voice instead? In my mind, you’re getting much more satisfying experience with Marshall’s offering than Google’s, and honestly, they do the exact same thing — play music at loud volumes. With the Marshall, you’re getting something you can talk about with friends who visit your home, while with Google Home Max, you’re getting a boring, cloth-covered speaker that just connects to the internet. No knock on the Max, I’m sure it’s splendid, but for $399 I want to be blown away. 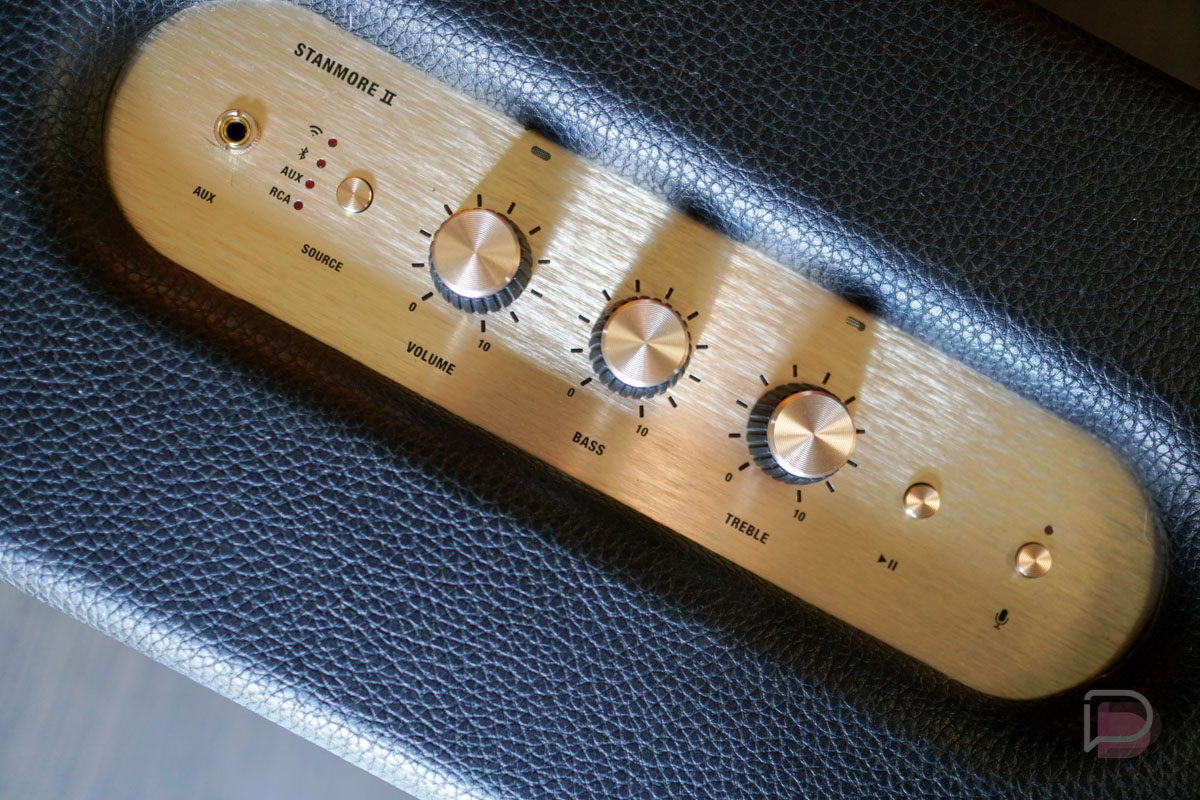 Want to know something awesome? There’s a less expensive model, too! At $299, the Acton II Voice looks nearly identical to the Stanmore II, but it’s a bit more compact. If you don’t need as much sound as you’d get from Stanmore II Voice, Marshall has you covered there.

In the expanding market of overly expensive smart speakers, I’m taking this Marshall over all others.