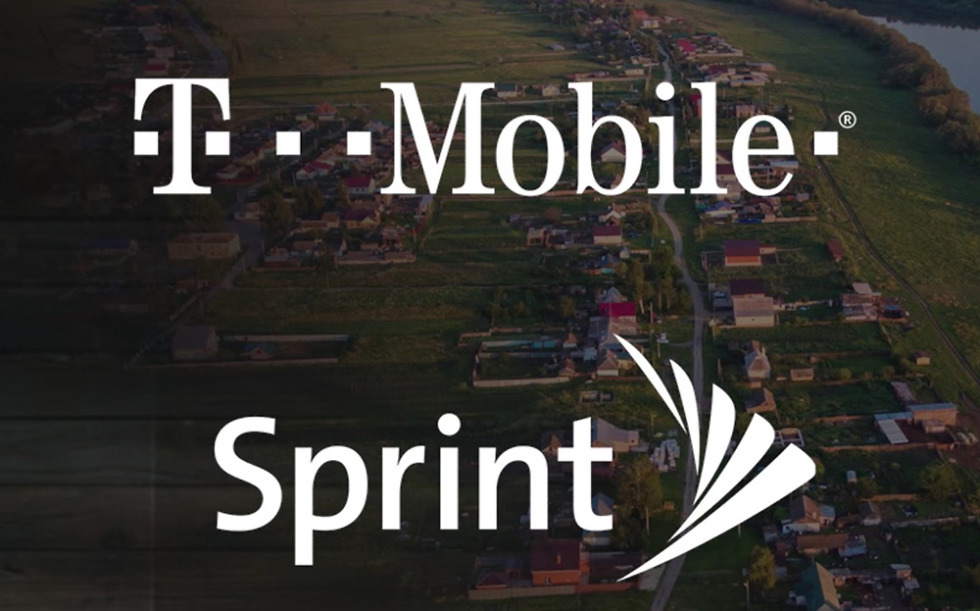 After yesterday’s T-Mobile-Sprint merger news dropped, I’ve been trying to figure out which side I’m on because this is potentially a really, really big deal for the US wireless industry at multiple levels. At this time, it’s hard to say definitively what will happen, even as T-Mobile and Sprint try and say all of the right things about the situation. So let’s talk through some of this together and see where we end up.

The best place to start is probably with the investor presentation (PDF) that T-Mobile released with yesterday’s announcement, as well as this new All for 5G website dedicated to spreading the message of the merger. The message is pretty clear at both: T-Mobile and Sprint together think they can build a 5G network faster than anyone, create jobs, keep up the Un-Carrier moves that have helped T-Mobile gain success in recent years, and…actually, those are the goals.

If we look at these in order, that lets us dive into their 5G buildout. According to Sprint and T-Mobile, their combined network resources should allow them to “build the first broad and deep nationwide 5G network.” They’ll do that using the substantial low-band 600MHz spectrum that T-Mobile has, along with Sprint’s 2.5GHz mid-band, while filling in higher-trafficked areas with millimeter Wave (mmW) spectrum. That combination offers a pretty compelling case for them to be able to build a 5G network that is indeed “broad and deep.”

T-Mobile says that it will use the T-Mobile network has the anchor network, while keeping select Sprint sites and increasing density and coverage. They’ll then use Sprint’s 2.5GHz spectrum throughout T-Mobile sites and build thousands of macro and small cells. 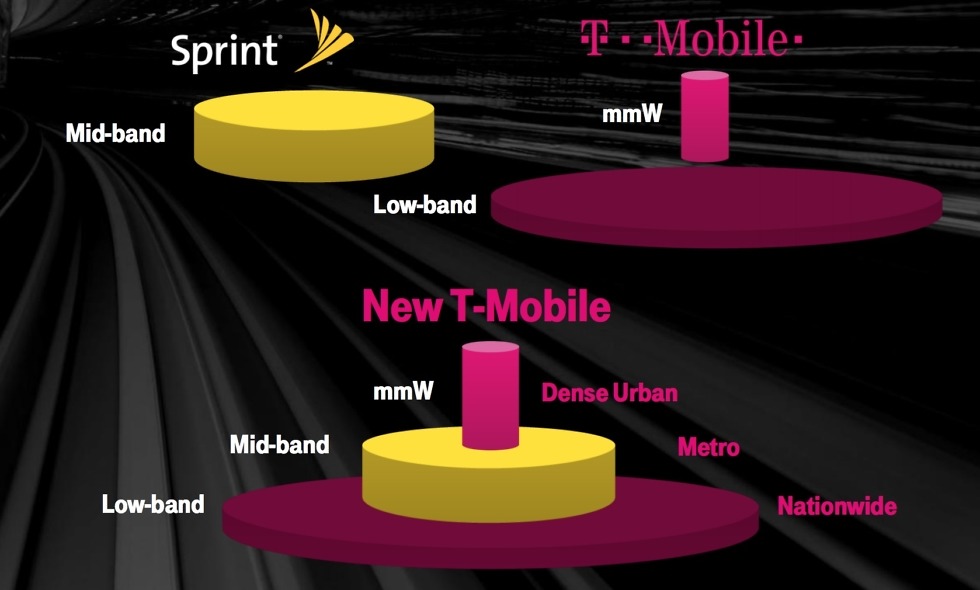 Part of the pitch here is that building this 5G network quickly enables the US to continue leading in global internet advancements. And that’s cool, I guess. Being early to a big, fresh wireless tech like 5G can increase innovation, add economic value, and of course, create jobs within this new T-Mobile as well as outside of it.

As for their ability to build this 5G network in a hurry, I think on paper it certainly shows that they’ll have the assets to do so. Individually, their spectrum holdings probably would have made this a slower process, but together, it kind of seems like a match made in heaven, assuming they can acquire more mmW spectrum.

Job creation will probably happen too

The next big goal of this merger is to add to the economy by creating a ton of jobs. T-Mobile has already made it clear that they think this merger will allow them to do so like it did with MetroPCS, even though people told them their acquisition of MetroPCS would do the opposite. While I’m no job creation specialist, it’s pretty obvious that building out a 5G network, along with thousands and thousands of new sites will create jobs, even if temporarily. T-Mobile has estimated 800,000 jobs in construction alone.

Sprint and T-Mobile want to build a network that can truly compete with Verizon’s, but they also want to do so in a hurry. In order to do that, they are going to have to increase their head count. They’ll need a bigger workforce to do that. They’ll also need staff in new areas as their retail footprint increases.

With that said, there will be consolidation. As these two companies come together, you have to consider the fact that we probably don’t need to flip the Sprint store that is two blocks from a T-Mobile store. Of course, support staff will need an increase to address the number of combined customers, but again, there will be overlap in areas that might see cuts. 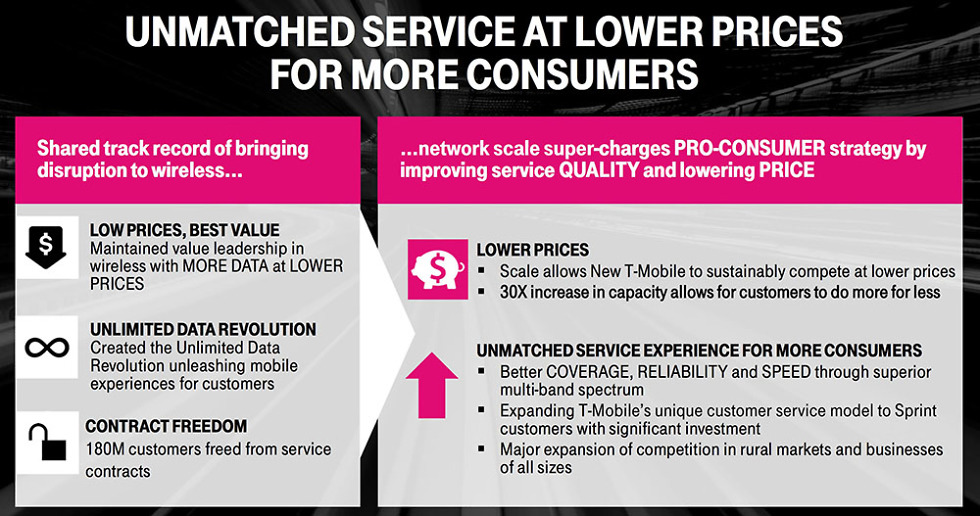 What about customer prices, though?

Alright, we’re finally getting to the part most of you probably all care about as customers – what will prices look like? As I mentioned above, we don’t know. T-Mobile and Sprint are promising “unmatched service at lower prices for more consumers.” And we know that T-Mobile has certainly done that to an extent with their Un-Carrier moves. We’ve seen 2-year service contracts end, the return of unlimited data, better international features, etc. But will Sprint and T-Mobile together give us more of that?

This merger changes the US wireless landscape from 4 big carriers to 3 big carriers. If we look at Canada, as some have already pointed out, that hasn’t exactly been awesome. Canada’s wireless costs are stupid expensive, they often lock you into ridiculous 3-year contracts, and the three players haven’t had much of a reason to compete with each other. Just imagine that there’s a possibility of that happening here.

You should also take into account the fact that building out a big, fast 5G network before anyone else will be expensive. What happens when you build out big, expensive things in a hurry? The cost of such buildouts could land on your bill. Look at Verizon as an example of that. Sprint already told us that 5G would bring about price increases too. T-Mobile is suggesting that scaling operations should help them to “sustainably compete at lower prices,” but you should be skeptical of that for the next few years as they pour all sorts of cash into their network.

So will prices drop with the new T-Mobile in the end? Honestly, that seems like a foolish bet to take. Will Sprint-T-Mobile be able to keep prices lower than Verizon and AT&T? Yeah, maybe, which is all they are saying. If Verizon and AT&T increase prices as they build their own 5G networks, T-Mobile doing the same but at a slightly lower rate is still an increase. Let’s not get those two items confused here. Prices will more than likely go up as these wireless companies build 5G networks, it’s just that T-Mobile is saying that they should be able to keep their’s lower than the big two. I’ll let you decide if that’s OK.

I don’t know if this is a good idea or not. I wish I had the answer for you. In the short term, if this helps T-Mobile build a bigger, faster 5G network for us all to use, that’s got some benefits. There are also potential negatives there in the form of price increases as that happens. But look, creating thousands and thousands of jobs, assuming this merger does that, is never going to be something to complain about. If T-Mobile shows up in areas that it wasn’t previously available, that is a new choice for people and new choices are good. Of course, Sprint going away is the removal of another choice too.

So yeah, this is a tough one. There are some good things that could come of this, but the long-term future is what should have people worried. Will we be the next Canada or will T-Mobile stay the Un-Carrier and push Verizon and AT&T in the right direction as they have the past few years? Will Sprint not being there at the bottom as a possible check on T-Mobile turn T-Mobile into the two carriers it so despises?