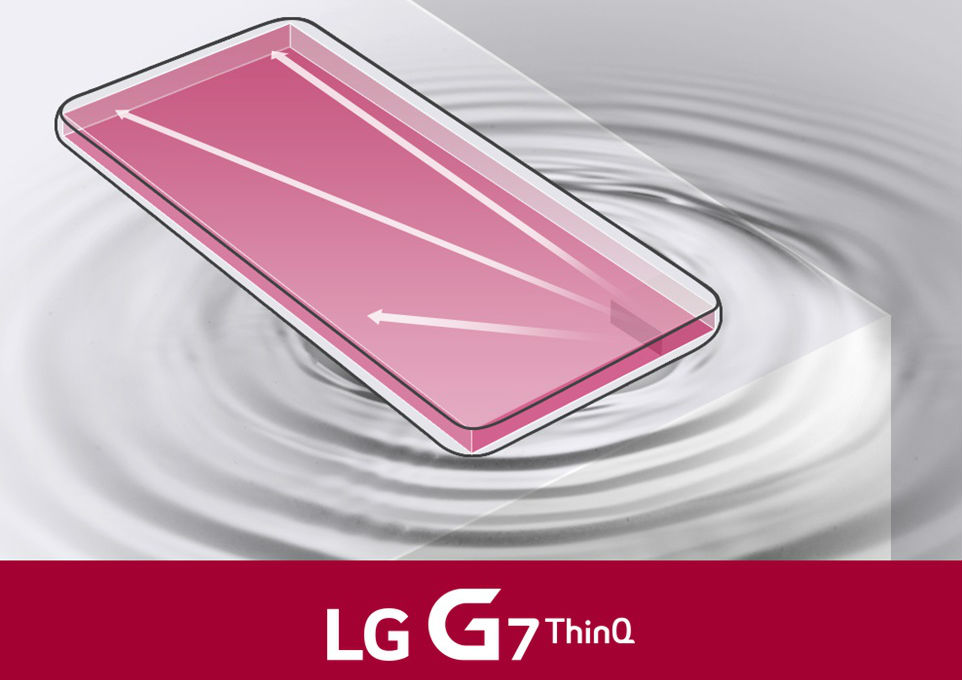 In typical LG fashion, we’re learning more about the upcoming G7 ThinQ via official channels, even though we’re 2 days away from an unveiling in NYC. This is fine with us, so long as we get a better understanding of what to expect later this week.

Yesterday, LG detailed all of the different audio aspects of the device. For those who cry for dual stereo speakers, that doesn’t appear to be the case on the G7 ThinQ. Instead, LG is utilizing a single speaker, but incorporating a design that’s essentially an echo chamber. In LG’s writeup, they call it a “Boombox speaker,” but what’s actually happening is a bit more interesting.

From what we can piece together using the above header image LG provided and the press release, air is being pushed into the device, a hallowed portion of the body to be exact, which allows for reverberation and the amplifying of your music. While you’re playing music, let’s say you place your phone on a table or any flat surface. In doing that, that object becomes a makeshift subwoofer for your phone, allowing for further resonation.

If this works half as good as LG makes it sound, it should be pretty cool.

In addition to the Boombox speaker, LG details that the G7 ThinQ will offer DTS:X immersive audio via wired connections. DTS:X is comparable to Dolby Atmos, allowing for high-end stereoscopic sound. To explain, you know the surround sound you hear when at the movie theater? When you can tell things are behind, above, left, or to the right of you? That’s essentially what this is, with DTS:X offering 7.1 channels without the need for advanced headphones.

LG further details that DTS:X will be available during playback of all content, meaning regardless of what you’re watching or playing, you should be able to enjoy an immersive audio experience.

The last audio enhancement on the G7 ThinQ includes the HiFi Quad DAC, an LG-described top-of-the-line acoustic component that implements four DACs on a single chip. With this, your audio should be insanely clean, close to being what LG offered on last year’s V30 and G6.

Here’s how LG Puts it.

The ‘HiFi Quad DAC’ applied to the LG G7 ThinQ provides strong high-fidelity output unlike ordinary smartphones, and it enjoys a rich volume even with high-quality headphones that are relatively easy to sound with a relatively high resistance value. It also supports the MQA (Master Quality Authenticated) standard, which allows you to enjoy high-fidelity high-quality streaming with little data capacity.

The G7 ThinQ will be unveiled on May 2.