We’re now a few weeks into your ownership of a Pixel 2 or Pixel 2 XL, which also means that your Google Store trade-in has likely processed if you sent that off. At this point, we’d love to know how that situation is shaking out, since a couple of our readers haven’t exactly had the best results there, plus there are a couple of lengthy threads over at the GooglePixel subreddit that are running into similar issues.

Here’s what we know today. People are getting nervous after sending in their trades because the early returns are not good. For example, after having sent in working phones that turn on and have no screen issues, users are receiving trade-in credit emails suggesting the opposite and adjustments to previously quoted values. The same thing is happening for some who are confident they completely factory reset their phones with the instructions Google provided, yet the trade-in company (Apto) is telling them otherwise and greatly reducing their trade credit. It gets worse when readers (like the one below) are sending in Pixel XL phones quoted at $400 values and receiving trade-in credit emails where Apto thinks the phone they sent is actually a Nexus 6P and worth hundreds of dollars less. 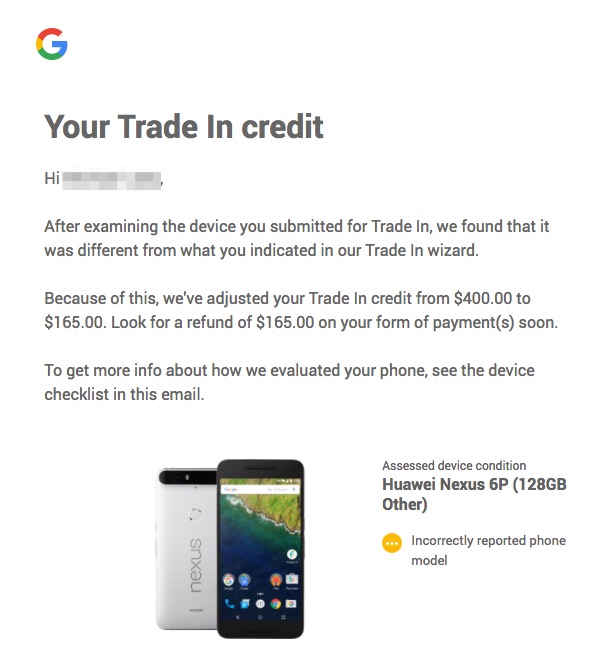 What can you do? If you haven’t sent in your phone yet, I’d say that taking pictures and video of it in the condition it is before going into the return envelope is probably a good idea. Some dude sent his in with a case on it and got dinged for that, so don’t send it in with a damn case on it. Google told us that they believe in their return envelopes, so that’s on them if something happens during travel. Also, if you are factory resetting, make sure you remove factory reset protection even if Google’s instructions aren’t telling you to do so. For these guys to be able to re-sell your phone, it can’t be locked to your Google account. So again, remove factory reset protection and all accounts attached to it.

What if you already sent it in and did none of the stuff above? If you get an email like the one above that is a different phone or suggests damage that wasn’t there, you need to contact Google support and escalate, escalate, escalate until you get the value that was originally estimated, assuming they got it horribly wrong. It might take some time, possibly a couple of conversations and an hour or more in chat or on the phone, but people are getting money back (see email below).

So let us know! How are things working out? Was everything processed cleanly or did you run into issues like we described above? What is Google doing to remedy the situation?