Guys, Verizon wants you to know that their network has never been stronger. They also want you to know that their network is super fast, that they win awards because of it, and that their unlimited data plan is awesome and certainly would never slow down their network or cause your experience on it to be shitty. With that in mind – because again, their network is stronger than ever and so super duper fast and stable and awesome and would never need help from struggling because, man, there is no struggle here – they are pushing out new unlimited data plans that are throttled to hell and back during video streams.

I know a number of you have heard the news already, but Verizon wasn’t up for sharing that information with us until a few minutes ago. So yeah, let’s talk about the new Verizon Unlimited plans!

All of the plans include unlimited 4G LTE data, along with unlimited talk and text. With Go Unlimited, the differences arrives via the price, the fact that all video streaming is throttled to DVD quality (480p), and hotspot data that is always throttled to 600Kbps. With Beyond Unlimited, you get HD quality streaming (720p), 15GB of 4G LTE hotspot, and calling, texting, and data in Mexico and Canada. If you want to know the Business Unlimited details, you’ll find those in the image below.

UPDATE: OK, I lied, there are some other sneaky things here to be aware of. On Go Unlimited, Verizon is reserving the right to throttle your general data usage at any time, should you run into “times of congestion.” For Beyond Unlimited, that type of throttling of general data usage starts at 22GB of use in a billing cycle (or 25GB with a 2-year contract).

Go Unlimited costs $75 for 1 line, but you’ll see discounts depending on lines you add on. Beyond Unlimited starts at $85 for 1 line and also offers discounts as you add more. 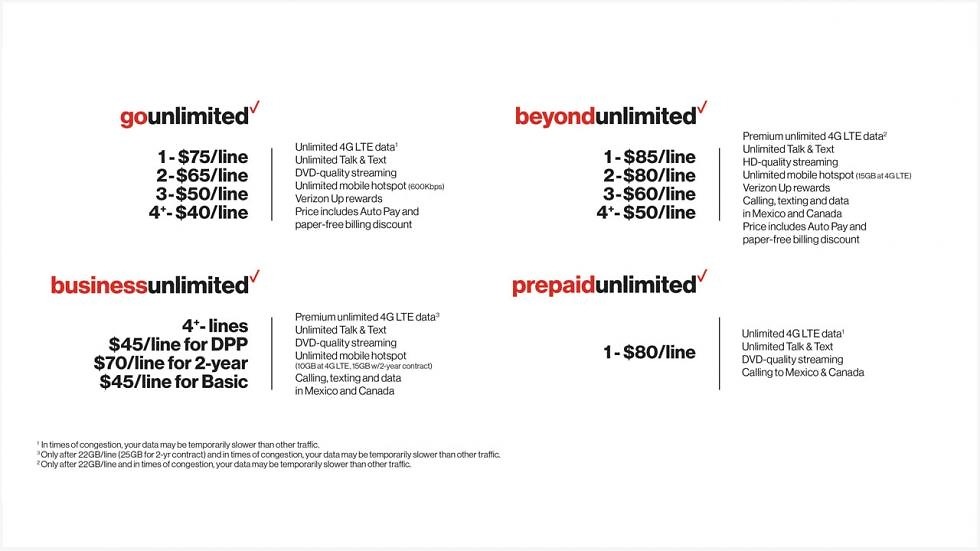 I know what you are probably thinking – are they really throttling all video at all times, even the Beyond Unlimited plan? The answer is: YES. And only at 720p. Your QHD phone will never play a 4K video stream going forward on Verizon’s network. It won’t even play a 1080p stream. If you have a tablet on Verizon’s network and one of these plans, you could get up to 1080p.

So much for “just testing,” eh Verizon?

Here’s the other thing – this also affects those of you on legacy unlimited plans. According to Verizon, “moving forward, HD video on all legacy plans will also match Beyond Unlimited’s HD quality.” If you are on Verizon Unlimited, you’ll start seeing throttled 720p video as early as tomorrow. There is no opt-out or buy-up either.

If you were looking for one bonus, that’ll come via the extra 5GB of hotspot data that your Verizon Unlimited plan now has. Yep, they are bumping you up to 15GB per month of 4G LTE hotspot.

But again, Verizon’s network is so good that you should never ever worry about your experience. 🤔

UPDATE 8/23: Now that the plans are live, here are some additional notes.

Beyond Unlimited is a great value, and even though it’s not eligible for your employer discount or corporate plan discount, you can still take advantage of any other benefits your employer’s program offers with Verizon Wireless.