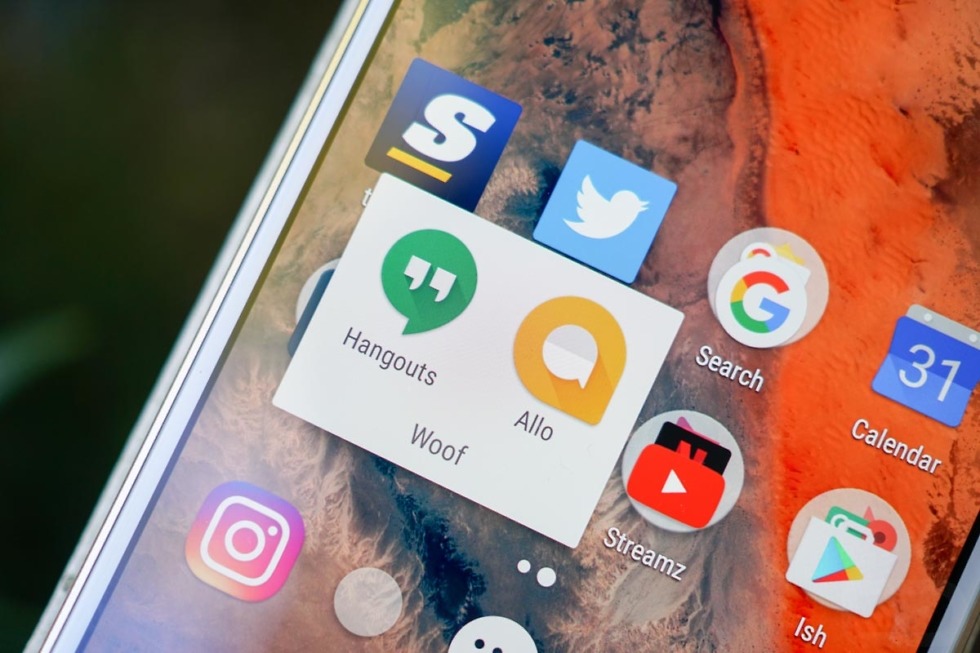 Allo, Google’s new smart messaging app, has been out for all of 13 hours now. During that short time, I think I’ve already come to the conclusion that this app isn’t for me. That’s not to say that this is a bad app, it’s just not in any way, shape, or form, an app that can handle my messaging needs. I actually joked earlier on Twitter that maybe Allo was really Google’s attempt to convince us that Hangouts isn’t all that bad and that we should stop complaining about it. After spending most of the morning whipping up stories and videos about Allo, I think that’s exactly what I’m realizing – that Hangouts is pretty damn good at what I need from a messaging app.

My biggest issue with Allo at this moment is the fact that it lacks any sort of presence outside of a phone app. Google has built Allo so that it attaches to your phone number, but for modern messaging apps, they also need to have either a web or desktop app experience too (WhatsApp does!). How many of us sit at a computer all day doing both work and messaging? I happen to have multiple conversations going on right now through two separate Hangouts Chrome extensions for two different Gmail accounts. That type of communication and multi-tasking can’t happen with Allo in its current form. In its current form, I would have to pick up my phone each and every time a new message came through instead of tabbing over on my desktop, responding, and then getting back to work.

And that leads me to my next gripe, which is Allo being stuck on a single device at all times. Not only do I sit at a computer all day, but I also use multiple devices throughout one. With Allo, I can only access one account on one device. That’s a huge, huge problem. You could argue that most humans don’t change phones as much as I do or carry two or three phones around, but I think it’s much more common today than you may realize. People have work and personal phones, and so it would be much easier to use Allo if you could get messages from a single account on both of those phones. As of now, if I sign-in to Allo on a second device with the same phone number as the first, it logs me out of the first. 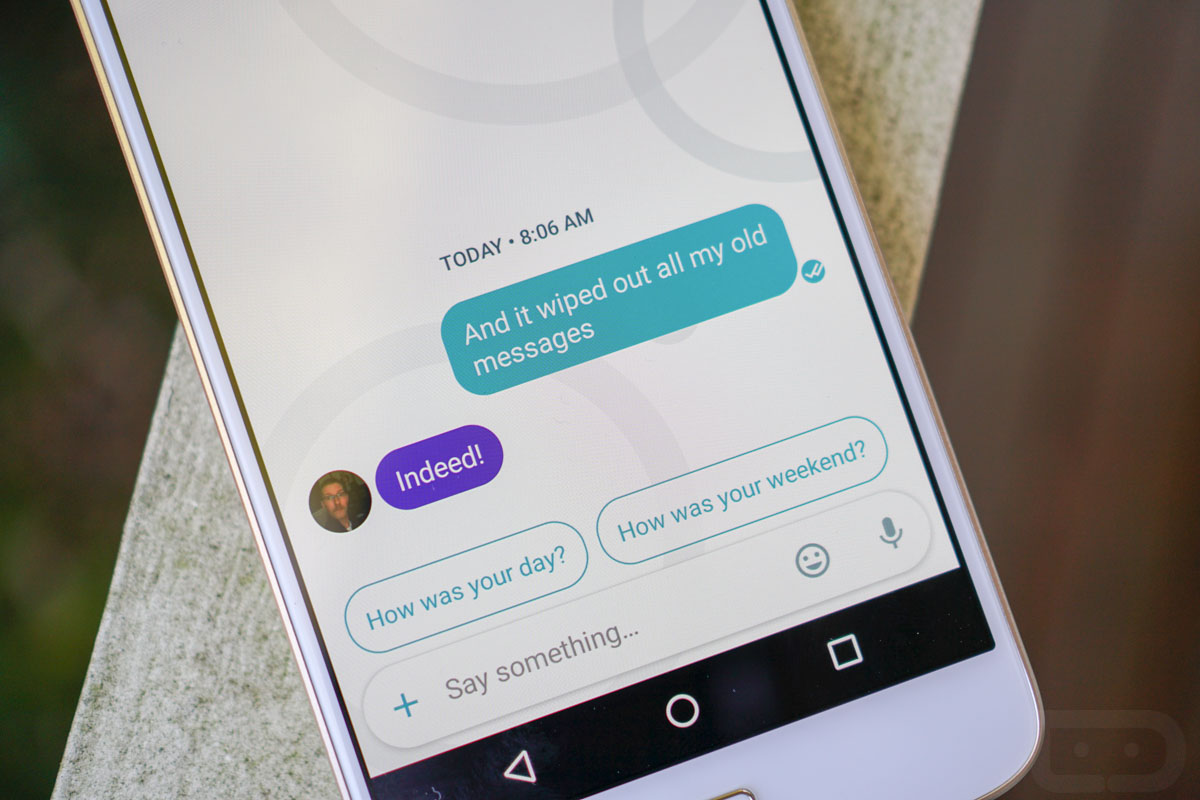 This thought gets even worse when you think about message syncing. As of right now, you can’t switch devices and carry over all of your conversations from an older phone. Again, if you buy a new phone in a month after spending every day having conversations on Allo, once you sign into Allo on that new phone, your conversations are all gone. I’m not kidding. Sure, Google could (and absolutely should) figure out a way to fix this problem, but what if they don’t?

Now, Google was supposed to push security and privacy with Allo, and so it almost makes sense that there isn’t device-to-device syncing or carryover. But then you realize that Google has already admitted that they backed off of part of their original security pitch by deciding to store your messages when they said they wouldn’t. If they have them stored on Google servers, why can’t those sync between multiple devices or accounts? Ugh.

What about SMS? Yeah, it doesn’t do that.

Finally, one of the most important issues I have with Allo has to do with it being new. Being new means that no one is using it and it would take an extraordinary effort for me to convince them to do so. After spending a good year or two or three getting friends and family to use Hangouts, I don’t know that I have the energy to do it all over again for Allo, especially when you consider everything I just mentioned above. Those are all serious issues and I have a feeling that they will affect many of the people I know as well. 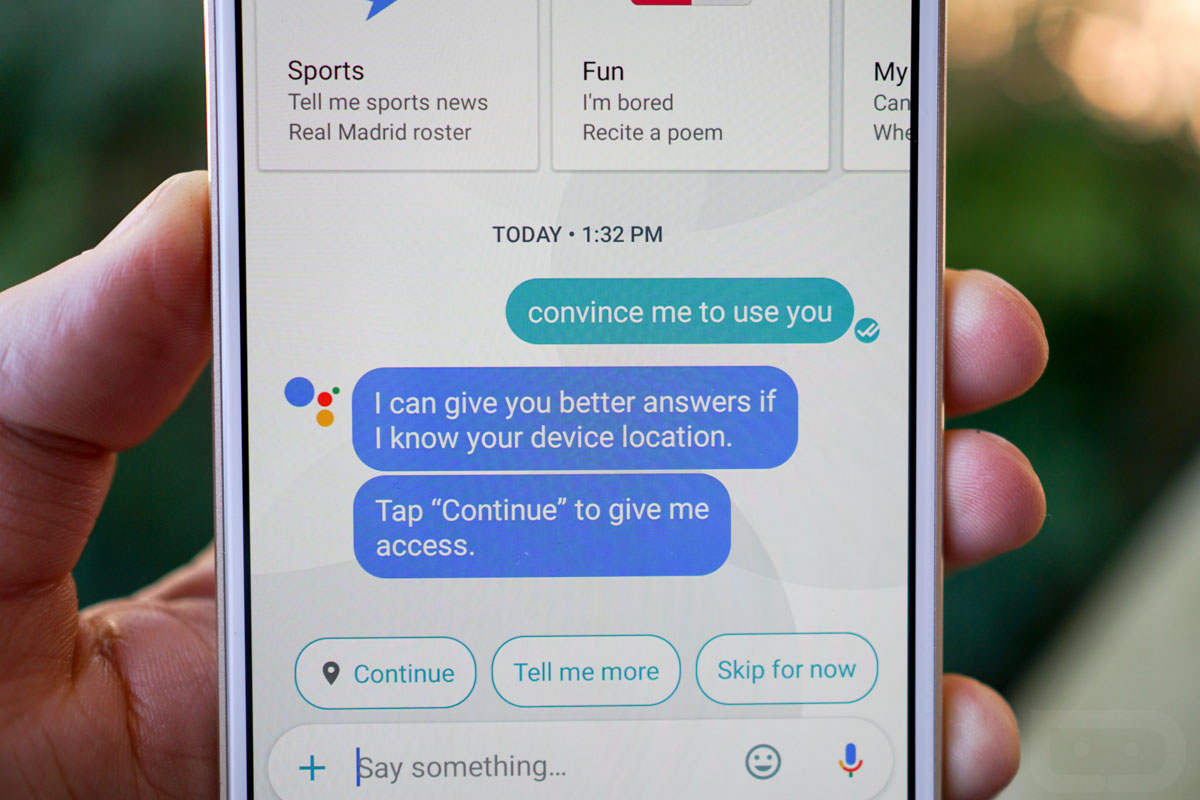 If there is one feature that I am jealous of, it would be Google Assistant. I would love to have Google Assistant access (built into Hangouts would be key) because I do think I would use it, especially in group chats with friends and family. Many of my conversations center around going out to eat or drink or flying from state to state to see grandchildren. Assistant would really help us all share travel itineraries, plan meals that everyone can agree on, etc. I would probably use its reminder and alarm systems as well. I spend enough time in Hangouts that having a dedicated conversation with @google would be something I would take advantage of.

In the end, if it wasn’t obvious, I basically just admitted that Hangouts does everything I need it to do at the moment. While I would love to have Google Assistant built-in, that’s something I can live without. It’s not like the Google Search bar is that far away.

Sorry, Allo, you just weren’t made for me.