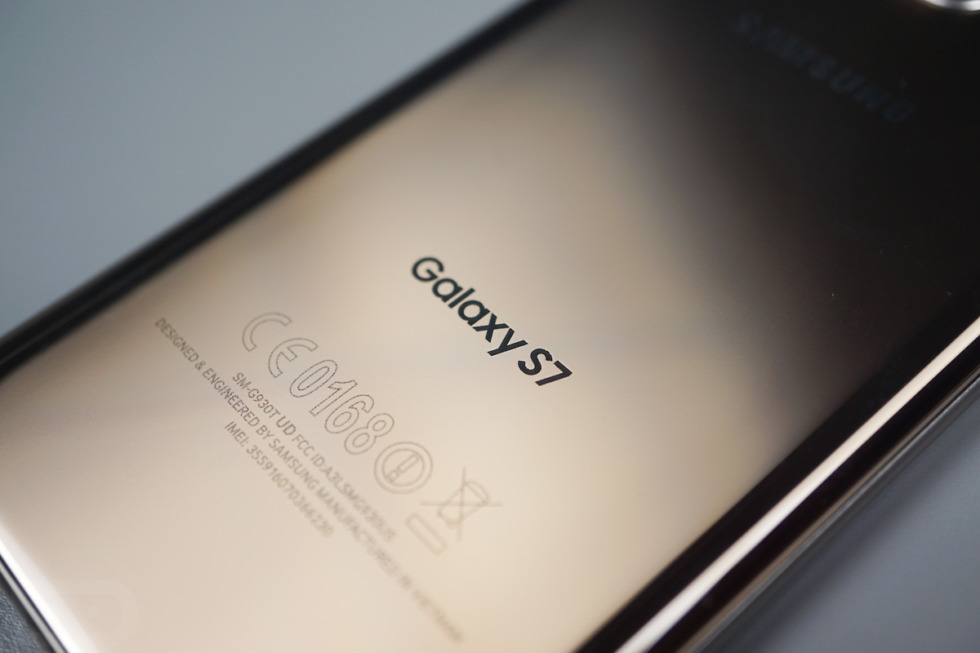 In recent years, we have spent a whole heck of a lot of time talking about the reasons we love certain phones and why you should buy them. We do that because we’re positive people for the most part and would rather spend our time focusing on the good stuff that are a part of a phone or watch package rather than the bad. But that doesn’t mean we don’t run into things that drive us nuts and irritate us to no end. So, because I just can’t help myself sometimes and wanted to have a little fun, I thought we’d give the other side a try to kick off the 2016 smartphone season by taking a look at the things the Galaxy S7 does that make me want to punch a wall. These are the things I can’t stand about the phone.

Now, keep in mind that this post is by no means a thorough review or in any way me telling you not to buy it. As of today, I’m really enjoying the Galaxy S7 and will probably give it mostly incredibly positive remarks in our upcoming review. Instead, think of this as me pointing out the pain points involving TouchWiz, design ideas that Samsung continues to stick to, etc., many of which I can live with but that need a good scolding. That make sense? 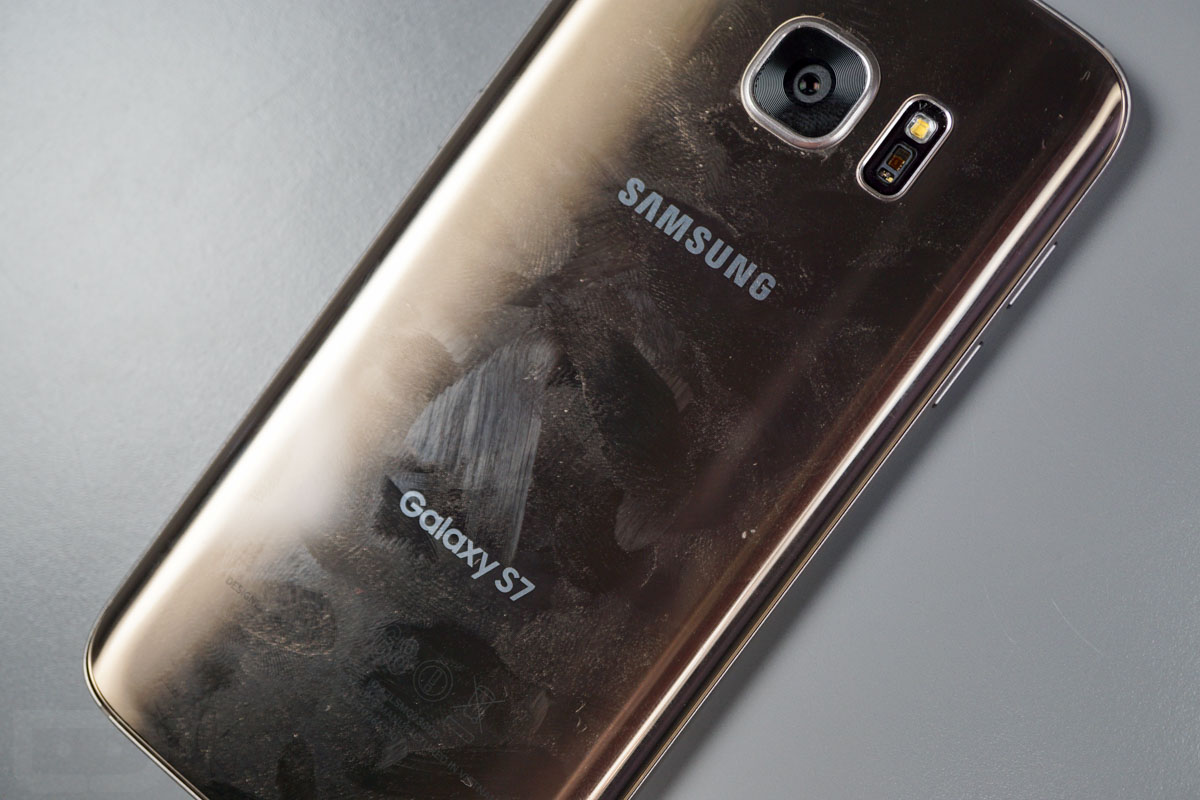 1. My lord, the fingerprints.

During my unboxing video of the Galaxy S7, I mentioned that I chose the gold version over the black because I was afraid that the black would be a fingerprint monster that would take my Greasy Smear OCD over the top. While I still think the gold version shows them less prominently, the phone needs to be wiped constantly. As someone who records a lot of video with this phone as the star, man, it’s become a problem.

2. Samsung, your buttons are still in the wrong places. 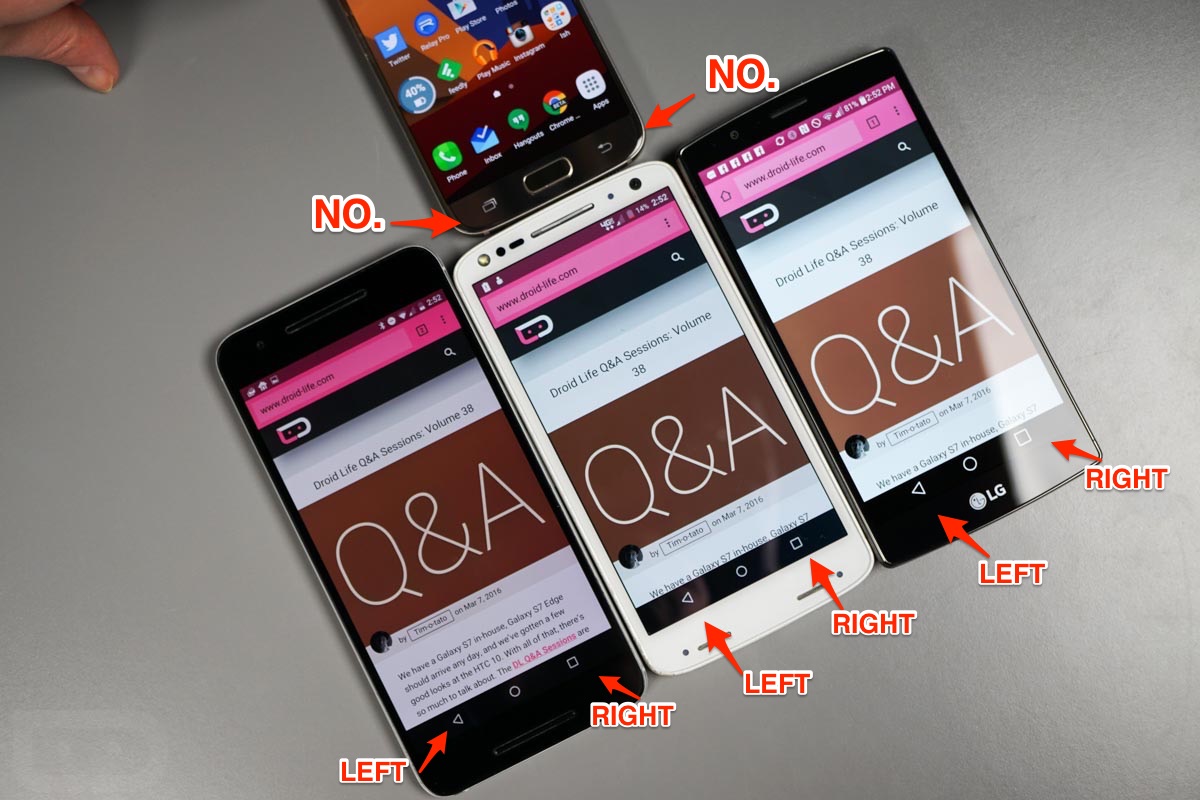 3. Listen to me the first time, app drawer.

With Samsung’s TouchWiz, the app drawer is arranged out of the box as if a 5-year old were in charge. There are folders you didn’t ask for at the front of it, folders which remove the apps contained within them from the actual app drawer list of apps (WHY?), making it impossible to find them unless you go into the obnoxious folders you didn’t ask for. Outside of disastrous decisions like that, the app drawer is also almost always not in alphabetical order. Why that is, I cannot explain for the life of me. Doesn’t it make sense that if you open an app drawer, you’ll be able to find things faster if they are in some sort of order, typically one that runs A-Z? Samsung doesn’t think so. In order to get it alphabetically sorted, you have to hit this little A-Z button, then confirm that you indeed do want to “save” it that way, as if you are doing it wrong. 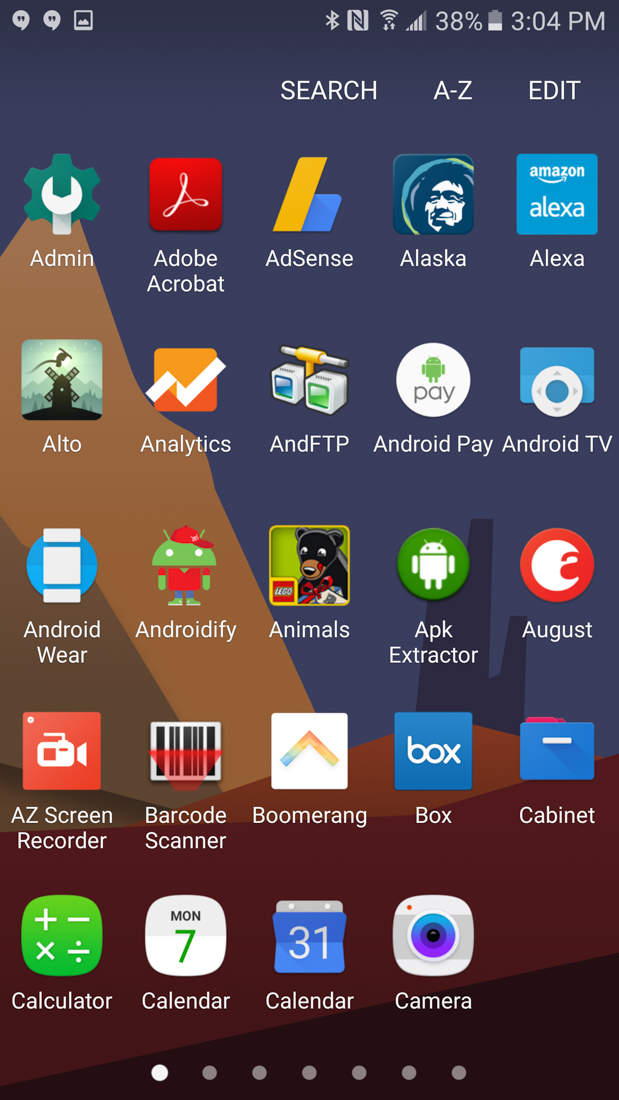 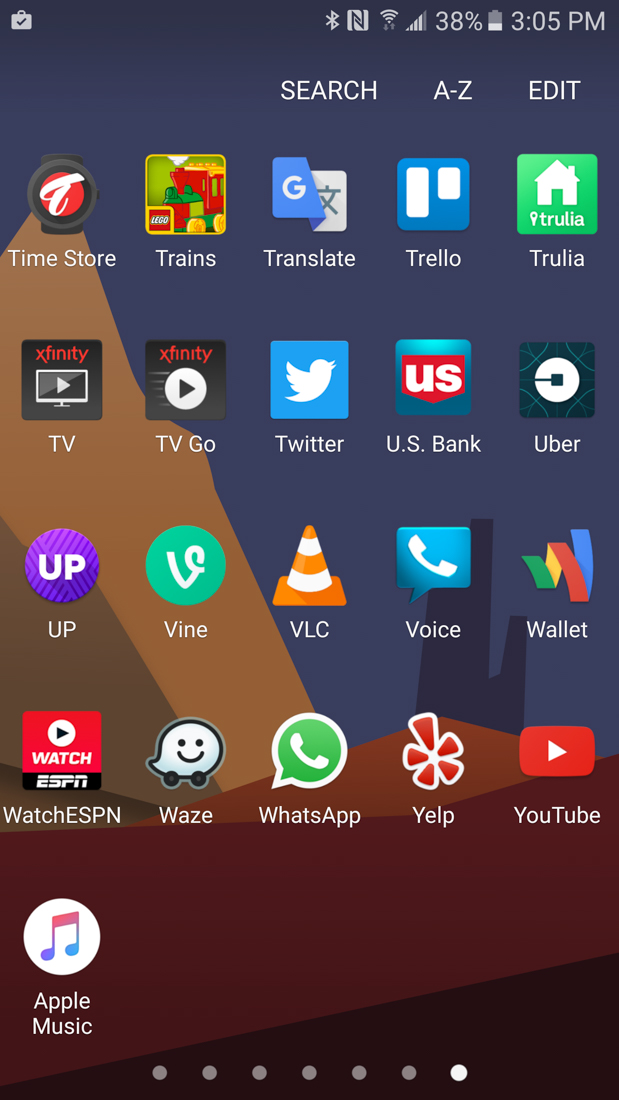 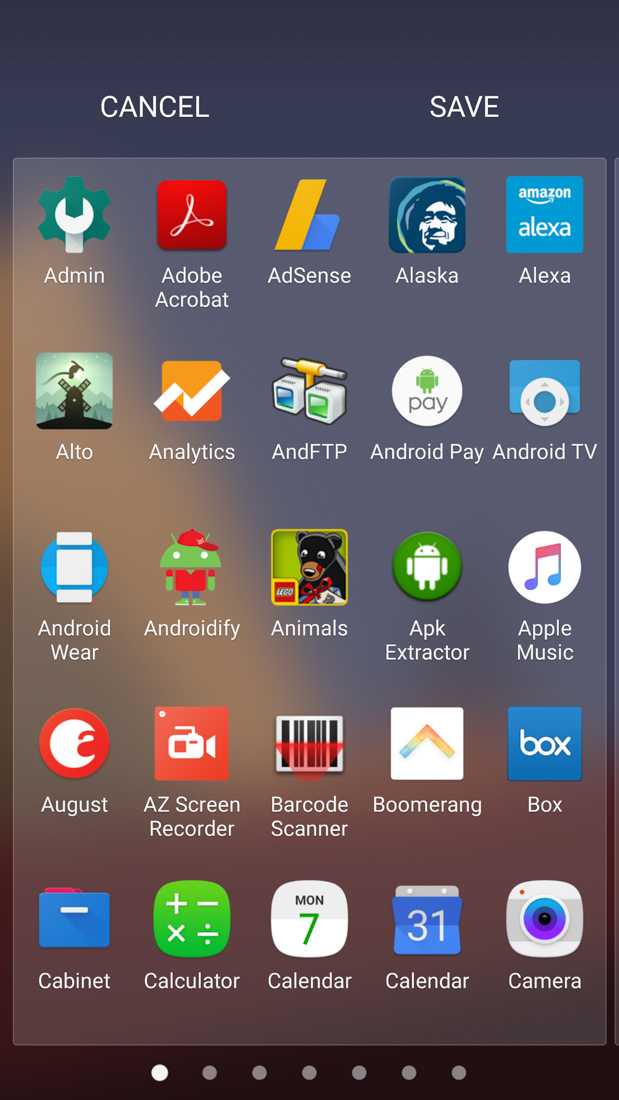 But get this. Every time you install a new app or remove one, the f*cking thing doesn’t re-sort alphabetically. Nope. It puts the newly installed at the back of the drawer, which is the furthest place away from where you probably attempted to find it. And if you were to uninstall one, it just leaves a blank space instead of pushing all of the apps up one slot. So then if you want everything back to normal, you have to hit the A-Z button again to re-sort, manually. AND SAVE IT. Wtf, Samsung?

I don’t have a baby thumb. I also don’t have a 1-inch thumb. Asking me to press this dotted-white button to get to all of my apps gives me a hand cramp every single time. Put the button in the center where my thumb casually rests without effort. At the very least, let me move the damn thing.

5. The folder situation is a mess. 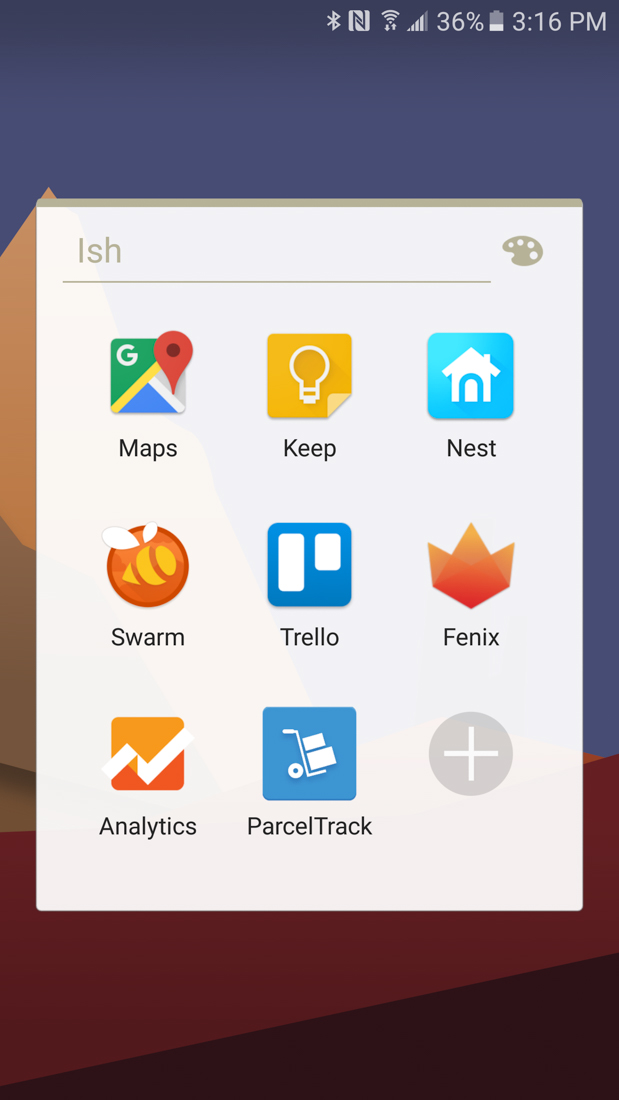 Why is there a “+” button there at all times? I don’t want that there. There could be an app there! Not only that, but it’s throwing off my balance in some crazy sort of way because I have 3 apps in two rows and only 2 in another…along with this stupid “+” button. Also, if I were to put another app there, look at what happens.

Now I have a new line that needs more apps in order to have balance. BUT I DON’T HAVE ANY MORE APPS TO PUT IN THIS FOLDER. I hate you, folder Samsung creation employee. I do.

A couple of versions of Android a-go, Google introduced better management over default apps and app linking. The idea was that someone might send you an Instagram link in Hangouts. Sometimes you want to open it inside of the Instagram app, but other times you may just want to quickly load it through Chrome. The beauty is that you, the owner of the phone, gets to decide how that works. You could hit the “Just once” button to choose on each occasion which app should open the link or hit the “Make default” button to choose an app that would always complete the task. 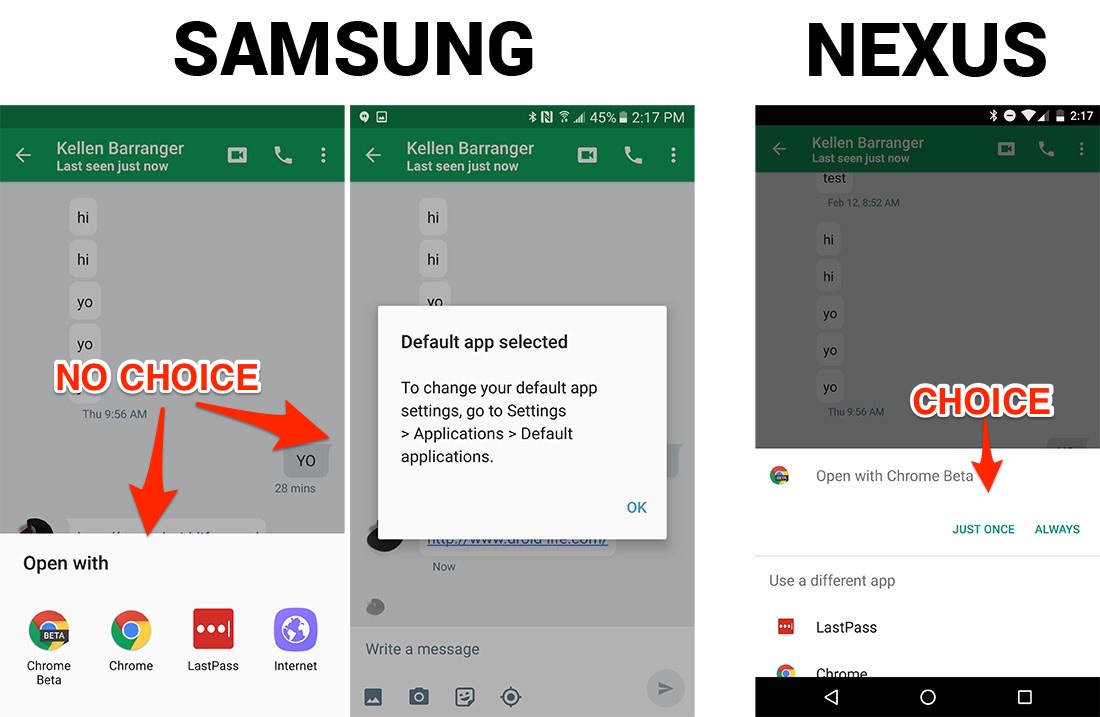 With Samsung, we’ve gone straight to #DEFAULT4LYFE. If you are given choices between multiple apps to open a link or complete a task, you better make sure your 1st choice is the right one, because Samsung will set that sonofa to default even if you didn’t tell it to. And if you want to remove that default, you need to dig through 8,000 of their settings to find and clear it.

In the share menu, widget picker, and app drawer, Samsung has gone with paginated horizontal scrolling. There was a brief moment in time where we liked this action, but once you go back to a free-scrolling vertical experience that can get you from A to Z with a single flick, you’ll never go back. Just don’t expect that type of efficiency on the Galaxy S7. Nope, it’s thumb flipping gymnastics here. Flip. Turn. Flip. Turn. Flip. Turn. “Oh hey, I’m finally at the end of my 16 pages of apps to find that newly installed guy!”

8. Bottom-firing speakers get blocked, a lot.

I game and watch videos on my phones here and there, but wouldn’t consider myself to be a heavy consumer of either. With that said, I find that I have to go well out of my way to not block the single rear-firing speaker on the Galaxy S7. At times, I find myself cranking the volume to 11 before realizing that I wasn’t having volume issues, I was having finger block issues. Look at this placement when in landscape – how do you avoid not placing your finger squarely over that speaker grill?

9. LED lights should not show in Do Not Disturb mode.

Imagine this. Your phone’s Do Not Disturb mode is set to come on automatically around 10:30PM at night and you hit the sack around 11PM. Things are quiet, the room is dark, you’ve pulled the blankets up to your chin, the whiskey in your belly is making you plenty warm, and your phone is lying on your night stand, lookin’ hella comfy with its always-on display active. Seriously, bruh, you look good on my night stand, dancing pixels, telling me the time. RIP, traditional alarm clocks, S7 always-on has risen.Then at 5AM, when all the go-getter PR people on the east coast start firing off emails about products Indiegogo would be ashamed to carry, that little blue notification LED lights up. But wait? Aren’t we in DND mode? How is it possible that I’m now awake at 5AM, thanks to the aqua colored needle pulsing into my eye (That’s, like, a metaphor for the blue LED…which is now a needle…virtually stabbing me…you got that? Yay!) over and over and over and over. 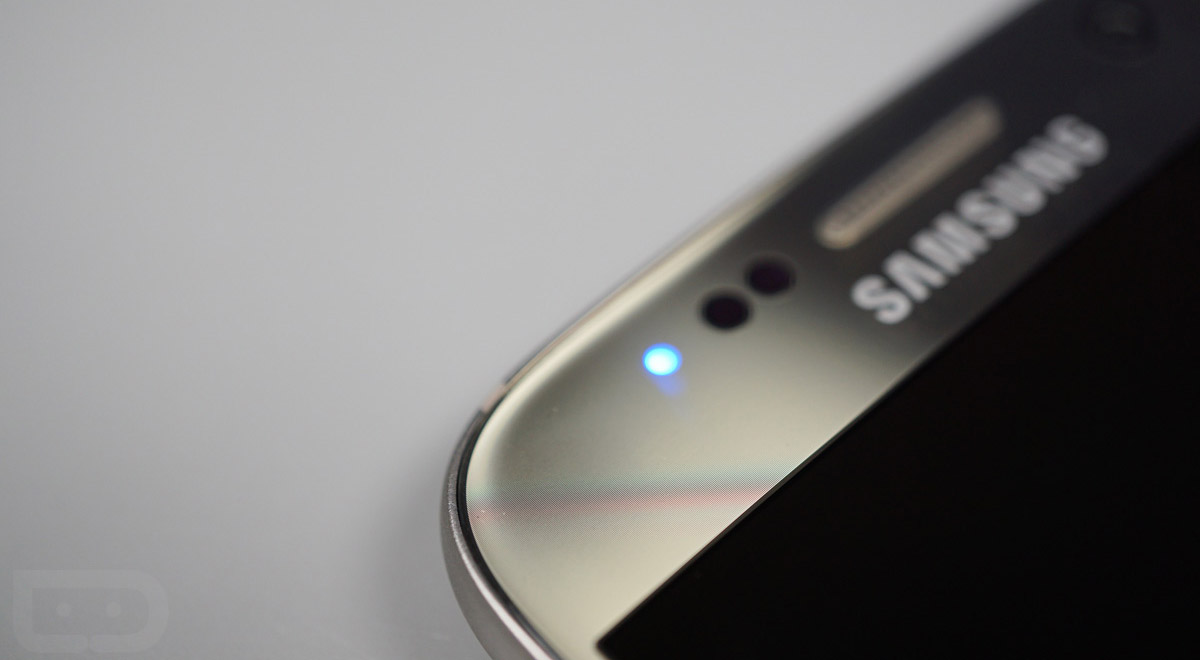 That’s because the LED notification light is not a part of DND mode. Nope! It’s in the display settings, but it stands alone. So even though DND is turned to on, your Galaxy S7 will still pulse all of the notifications that come in throughout the night and into the morning. I don’t even know what to say to the person who made that decision…

Alright then, complaining session over. Back to the fun tomorrow. If I can get this needle out of my eye.