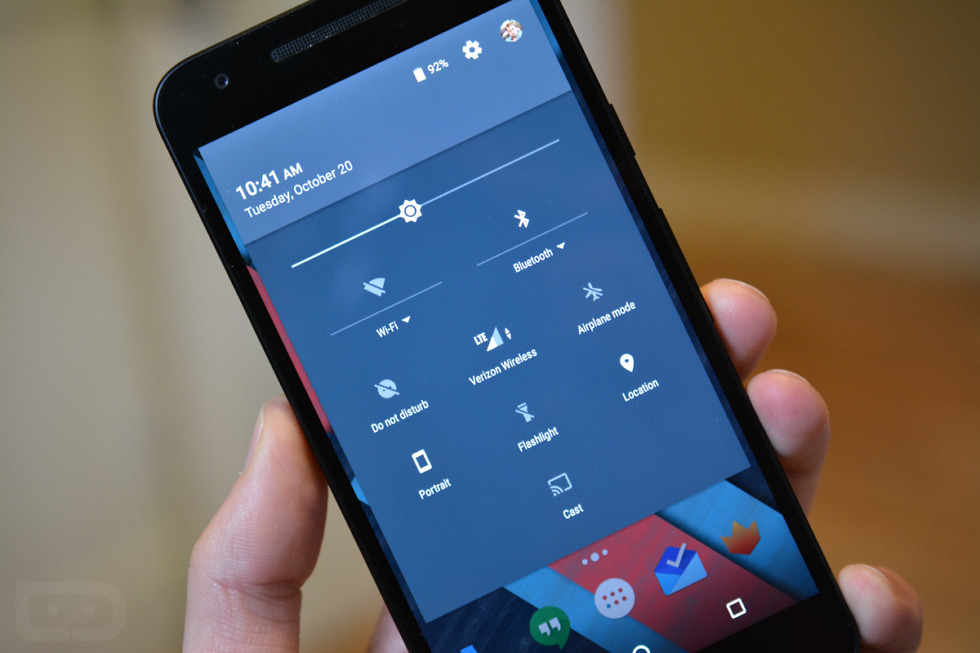 So, you picked up a new Nexus 5X this week or are expecting to receive your Nexus 6P in the near future and want to use them on Verizon, eh? There are some things to know first, as is always the case with unlocked phones that work on Verizon’s network. Like with the Moto X Pure Edition and Nexus 6 before it, getting the new Nexus phones up and running may not be the smoothest process depending on your stance with Big Red as a customer and whether or not they plan to certify these devices for use.

These phones do work on Verizon.

Yep, they do. Google, as was the case with the Nexus 6, made these phones compatible with every single major US carrier and that includes Verizon. Look at the photo above for proof. That’s my Nexus 5X with a Verizon SIM inside and working just fine. If you have active service with Verizon and an active nano SIM card, you can put that SIM in your new Nexus phone, reboot it, and it will connect to Verizon’s network. It’s really that simple. You don’t even have to deal with Verizon to do this. Just swap the nano SIM from your current phone and into your new Nexus.

This is where things get tricky. Verizon likes to certify everything before they give it an official green light on their network. While Google made the new Nexus phones 100% compatible with Verizon’s network, that doesn’t exactly mean that Verizon is ready to acknowledge them quite yet in any sort of official capacity. And so in certain situations (where you don’t already have an active Verizon nano SIM), you may run into issues getting the phones activated.

Situation 1:  You are a new Verizon customer who wants to activate a Nexus 5X or 6P. The likelihood of this happening today (October 22) is unlikely. Why, you ask? Because as I just mentioned, Verizon hasn’t certified these phones for their network. That means if a Verizon rep were to try and set your phone up on a new account, it would fail because the phones are not yet in their systems as approved phones. Sucks, right? The phones work just fine, but this little tiny activation portion of the setup, where they are basically just activating a SIM for a phone, fails.

Situation 2:  You are a current Verizon customer and bought a new Nexus 5X or 6P. You own a smartphone, but it just so happens that the phone is older and doesn’t have a nano SIM. Instead, you have a micro SIM. You are basically in the same boat as situation 1. You see, you need a nano SIM in order to use one of the new Nexus phones. Since you have a micro SIM, Verizon needs to activate a nano SIM on your account, for your Nexus. But remember, the Nexus phones aren’t certified yet for Verizon’s network, and so they can’t activate that new SIM. Fun!

There are some work-arounds, but in reality, your goal is to get a nano SIM activated on your account by any means necessary. Here are some things to try.

Solution 1:  Go to this Verizon page and test the IMEI on your phone to see if it’s “compatible” with Verizon’s network. Today (October 22), it’ll tell you that it is not, even though it technically is. Basically, this page is a tool to see if Verizon has certified the new Nexus phones or not. If you get the error below, they haven’t certified it yet. If you don’t get that error and it accepts your phone, then you are good! Feel free to walk into a store and get a nano SIM activated.

Solution 2:  Try to convince anyone at a Verizon store to activate a nano SIM in something like a floor model. They can do this, but have probably been told not to. Some store managers or rebel sales reps will do it, but the chances of you finding one are probably pretty slim. Hey, give it a shot, though. You see, by activating a nano SIM for you in a demo phone (even temporarily), you are winning because remember, your goal was to get a nano SIM activated on your account. Once you have it,  you have it and can slap that little guy in your Nexus phone and be on your way.

Solution 3:  Convince a friend or family member with a phone that uses a nano SIM to let you borrow it for a few minutes. Basically, you just need their phone to take into a store or use online to get a nano SIM activated. Once you have an active nano SIM, they can have their phone back and can also put their SIM back in. Then you also now have an active SIM that can be placed inside your Nexus.

Solution 4:  If you have an active micro SIM, you can cut it down to a nano SIM. It’s not a difficult process, but it does require some specific tools that you can get at places like Amazon for a few dollars. Here are instructions for cutting a micro SIM down to a nano SIM.

Will they ever certify these phones?

As of right now, I do not know the answer to this. I’ve reached out to Verizon to see and will update this post if I hear back. This is a big deal because if they do certify these phones, you won’t have to deal with that whole work-around mess.

UPDATE:  I have yet to hear back from Verizon, but Google has updated their 5X and 6P specs pages with the following info and also says that Verizon customers having issues should call the phone number below.

Verizon customers: If you have a new SIM card and are having problems activating it, try restarting your phone. If that doesn’t work, call Verizon Customer Care at (800) 922-0204. You’ll need your IMEI number, which you can find by going to Settings > About phone > Status > IMEI information.