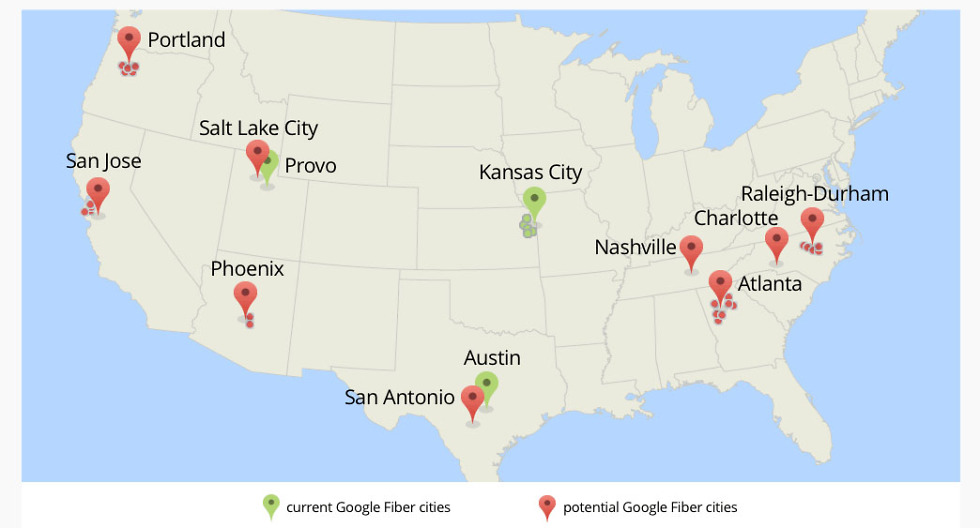 Google Fiber is expanding to four new markets that include Atlanta, Charlotte, Raleigh-Durham, and Nashville, according to sources of the Wall Street Journal. Local news organizations have reportedly been sent invitations to attend events this week that will make the markets official, though details on those invitations didn’t reveal any subject matter. Of course, anyone who has followed Fiber news on any level can see the significance in those four cities.

That’s right, those cities should sound familiar. All four were a part of Google’s list of nine potential new markets that were announced at the beginning of last year, a list that also includes Portland, Oregon, Salt Lake City, San Antonio, Phoenix, and San Jose. A spokesperson for the City of San Jose told the WSJ that he was contacted by Google on Monday, informing him of the impending announcements, but that these announcements shouldn’t be seen an “end of the road” for other areas.

As for other areas, Google has yet to make any official announcements, but today’s report does mention that there are significant roadblocks in the Portland area, thanks to tax-assessment rules that may take months and months to iron out.

Are you in one of the new markets?