Back in September of 2011, Verizon introduced a new initiative called Network Optimization that only affected unlimited data customers. What is Network Optimization? Well, it’s a little bit like throttling in that Verizon can slow down your data connection if you meet a list of factors, because they don’t want you to ruin the data experience for the rest of their customers.

The thing is, up until now, Network Optimization only affected the 3G connection of those with unlimited data plans. Since most of you are all on 4G LTE now, it really didn’t matter much. But according to sources of ours, along with at least one reader who has been notified of the change, LTE will become a part of the “optimization” starting October 1. Like before, this only affects unlimited data customers.

This is what we know.

Update:  The policy is changing somewhat on how long you could be throttled. From information we have received from sources (and now reflected on Verizon’s own policy), the throttling could last through a current billing cycle and on to the end of the next, should a user be on a cell site experiencing high demand. This is the exact wording for the potential throttling – “The customer may continue to be impacted for the rest of the current billing cycle and through the next billing cycle, but only while on a cell site that is experiencing high demand.”

According to Verizon’s Network Optimization page, as of March 2014, you qualify as being in the top 5% if you use 4.7GB of data or more per month. That could fluctuate over time, though we aren’t sure how often Verizon updates this number.

If you are worried that you may be impacted by Network Optimization, Verizon has options for you, though you you may not love them:

Beginning August 1, Verizon will notify its customers of this change with the following message:

Wireless strives to provide its customers with the best wireless experience when using our network. In 2011, Verizon Wireless launched Network Optimization, which slows the data speeds of its unlimited data subscribers with 3G devices who are in the top 5% of data users when they connect to a cell site experiencing high demand. Effective October 1, Verizon Wireless will expand its existing Network Optimization policy to include its unlimited data subscribers using 4G LTE devices who have fulfilled their minimum contract term. Based on your plan and recent data usage, one or more lines on your account may experience a reduction in data speeds when connected to a cell site experiencing high demand. Customers on MORE Everything or other usage-based data plans are not subject to Network Optimization. For more information about our Network Optimization, please refer to www.verizonwireless.com/networkoptimization.

The changes on Verizon’s site to reflect this move are already taking place. Take a look at the screenshots below of Verizon’s Network Optimization page today compared to what it looked like back on July 20. There used to be references all over it to Network Optimization only affecting those with 3G connections, and that if you wanted to avoid being throttled you should buy an LTE device. But now, those references have all been removed. The new page is setup perfectly to cover all unlimited data users, including those with 4G LTE connections. 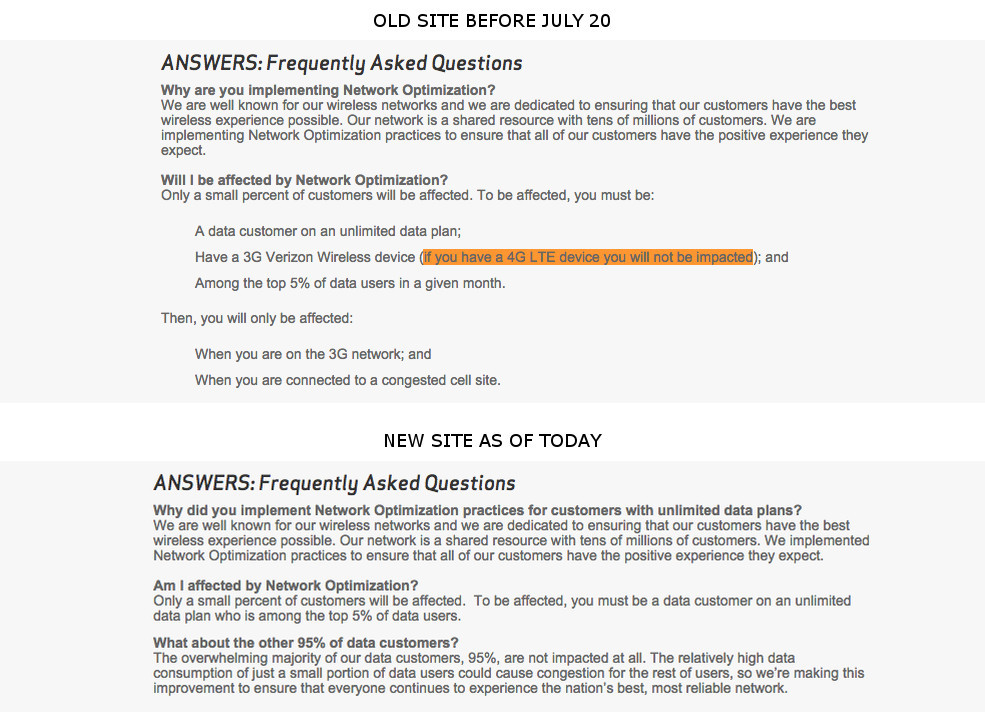 Again, this only affects 5% of their unlimited data customers, which are those who use more than 4.7GB of data per month (as of March 2014). In order to experience the “optimization” or slowness, you also have to meet other criteria. . Edit: It could actually be for more than one billing cycle, if on a cell site under high demand.

Just wanted you to be aware.

Update 2:  Verizon has made the news official.