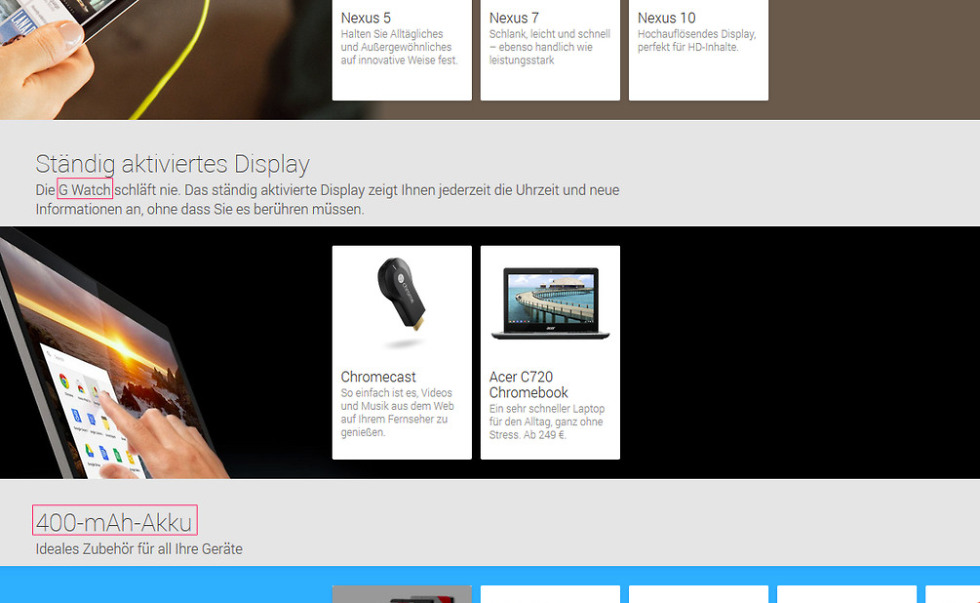 According to a couple of German-based Android sites, Google updated the German Play store’s devices page at some point today with information suggesting that the LG G Watch is imminent or will at least be sold through Google Play at some point in the near future. I can’t see the text that is referencing the G Watch here in the States, but a couple of screenshots – one of which we included above – show what was likely a premature edit by Google.

In case you need help with your German translation, the few G Watch references mention that the device will have a “constantly active display” that is never asleep. With a constantly active display, you can view the time at any time, plus new information just when you need it. Finally, the listing talks about the 400mAh battery packed in the Android Wear watch which was previously leaked.

We should point out that an actual G Watch device page was not found, only the text mentions on the Google Play devices page.

So really the only new information we are getting from this error is the idea that Google will likely sell the G Watch directly through Google Play. The G Watch is thought to be the reference device for Android Wear, so that certainly makes sense. We still do not know a price, though rumors suggest it should land below $200. Is it out of line to mark a Google I/O release on our calendars?

No mention of the Moto 360 was found.

Via:  AndroidPit | Android Next