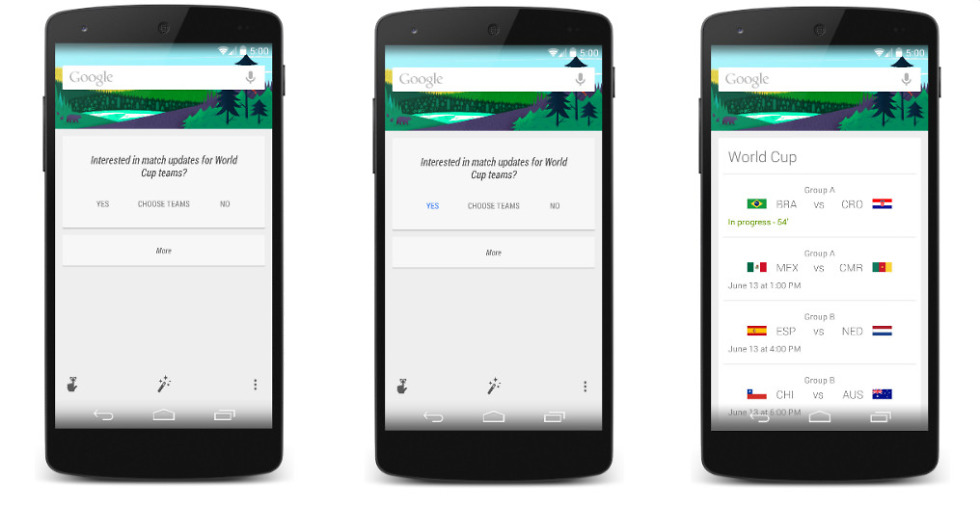 The screenshots including above may look like Google is sharing info on how you can keep up with the World Cup through Google Now. And you know what? They are. But, there is something else that the hypebeasts in the building will have a field day with, and that’s the clock. What does “5:00” in a series of screenshots have to do with anything? Well, if you have been following the Android game at all over the years, quite a bit actually. Is it a hint at Android 5.0? Maybe.

You see, whenever a new Google product is released, typically a Nexus device, Google uses the clock to show the version of Android that it is running. For example, the Nexus 4 was introduced with “4:20” as the time, because it ran Android 4.2. The Galaxy Nexus showed “4:00” because it ran Android 4.0. The original Nexus 7 had “4:10” in the clock for Android 4.1. If you look at current pages for the Nexus 5, Nexus 7, or Nexus 10 on Google Play, they all show clocks with “4:40” as the time. Yes, that is in reference to Android 4.4 that they are now running. Hell, even the Nexus S showed “2:30” in the clock in reference to Gingerbread, Android 2.3. If you can’t tell, Google has been doing this for a long time.

So, does that mean that Google just teased us with Android 5.0? Well, if you buy into the idea that Google shows the time as the version of Android, then yes. If you buy into Google as the ultimate troll, then you have that as well. Keep in mind that the @GoogleNexus account gave us a preview of the new dialer through Twitter, weeks before it was released in Android 4.4.3. These things do happen.

The bigger question is – when is it potentially coming? With Google I/O only two weeks away, is there any chance that we see it then? That’s a tough call. If they do, then Google has done a brilliant job at keeping it completely secret. Or again, they could be trolling the fanboys that pick up on things like a clock meaning version of Android.