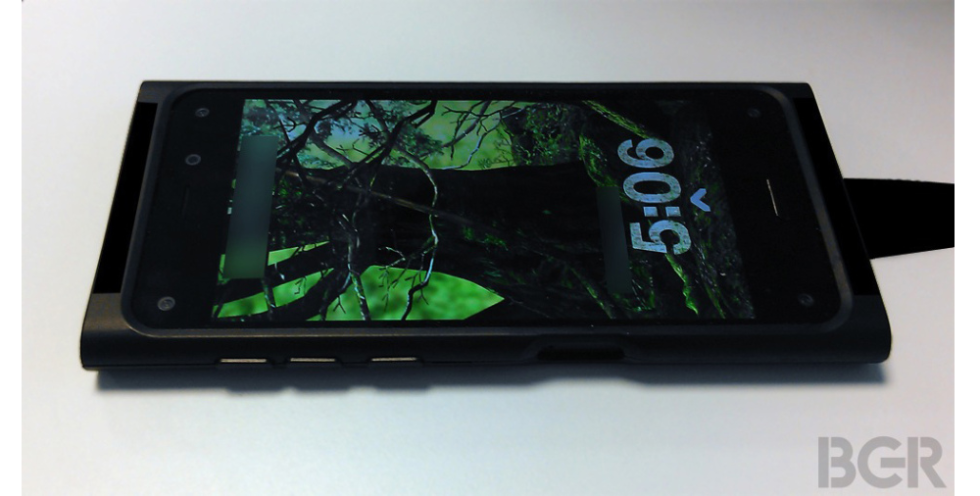 Speculation of an Amazon smartphone is nearly as old as time itself. Well, that’s a bit of an exaggeration, but it seems nearly every year that rumblings suggesting the online retailer is planning to launch a phone are widely reported but never pan out. This time may be different, however; if information and snapshots obtained by BGR proves accurate, Amazon may finally look to grab a slice of the smartphone market this summer.

According to the article, Amazon has a low-end and premium handset in development. The premium model is pictured, but its design is concealed by a security cover.

The high-end device is more interesting by far. BGR sources were able to corroborate rumors of a 3D interface, confirming the presence of four front-facing infrared sensors that track the retinas of users’s eye and software that works to change the perspective of on-screen elements. The effect is like a 3D hologram without the need for glasses or parallax.

The report said every aspect of the phone’s UI will leverage the unique hardware. Backgrounds on the lock screen will shift perspective, for instance, and applications icons will move in all directions. A customized version of the Amazon Store will include 3D images, allowing users to view products at different angles.

Several preloaded apps will support 3D, including a maps application, but Amazon is apparently working with select developers to have third-party support at launch.

In terms of hardware, the premium smartphone is no slouch. It reportedly sports a 4.7-inch, 720p display and packs a Qualcomm Snapdragon processor, 2GB of RAM, and a 13-megapixel rear camera.

The entry-level handset will launch after the high-end model and potentially lack 3D support.

No word on pricing or availability, but the report said the low-end model would be aggressively priced. As far as a launch windows, Amazon may intend to unveil the smartphone within  3-6 months.

Are you bullish on Amazon’s 3D, readers, or is it just another gimmick?