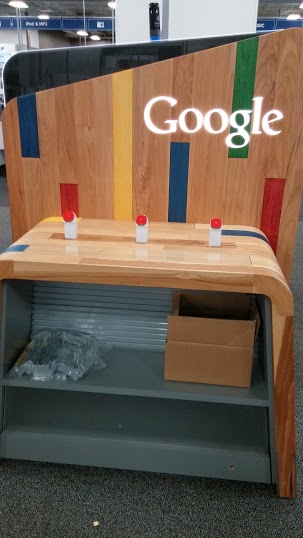 Update:  At least three readers have already weighed in, saying that in stores near them these are Chromecast, Chromebook, and Nexus 7 displays. Nothing to get excited about. Carry on with your night. Hypebeast, out.

Well then, is that an empty Google display we are seeing setup in Best Buy stores? Why yes, it appears to be. But what could it be for? Having seen similar tech displays in stores like Best Buy for years, it certainly looks like the type of display that would house phones or tablets. Those little prong stands are used everywhere, from carrier stores to press events as a way to secure devices. But which Google devices could they be preparing to hold?

We know that Google is on the verge of announcing something (potentially at the end of the month), more than likely a Nexus 5 phone. There are also rumors suggesting that they could unveil a watch (which we first reported as codename “Gem”) and new Nexus 10 tablet as well. Is this display created for these three devices? Or maybe the Nexus 5, Nexus 7, and Nexus 10?

Or maybe it’s for holding current Google products, like the Nexus 7 and Chromecast and this one happens to be empty?

Those are all questions we do not have the answers to. With that said, the guy who posted this picture claims that a Best Buy manager told him it was for the Nexus 5. Take that as you will, obviously. This is the internet after all.

And, is that a bowling alley shaped into a tech display stand?

Best Buy employees, care to weigh in with your thoughts?