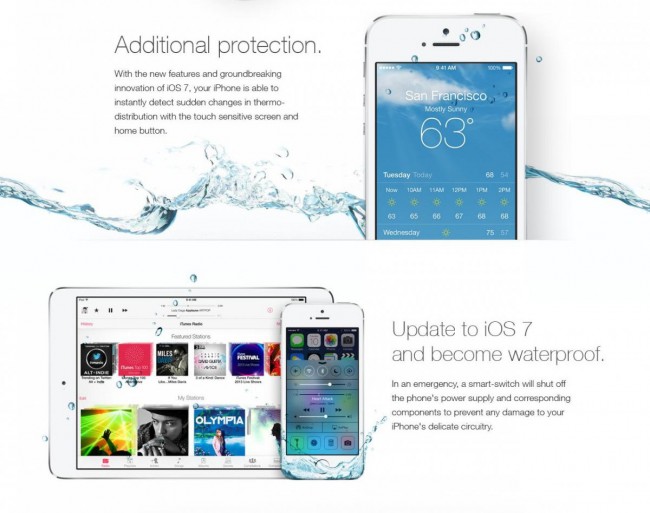 Guess what, a software update can’t actually waterproof your phone. A phone (at least any of today’s current models) can’t sense “changes in thermo-distribution” and shut your phone down should it come in contact with water. What am I referring to? This week’s iOS 7 waterproofing debacle of course.

For those not familiar, a fake ad that spread across these vast interwebs over the weekend claimed that an update to iOS 7 would waterproof your phone and that “Apple’s warranty policy” covers it. Users who upgraded then decided it was a good idea to test this new magic waterproofing. You can imagine the outcome. This story has so many lulz in it.

Not that we would ever expect you to believe that a software update could physically change the hardware of a smartphone, we just want to make sure it’s clear before something similar potentially happens when Android 4.4 “Kit Kat” is released in the coming months, that you are covered. OK, that’s mostly a lie. We really just wanted to take this opportunity to laugh at those who updated to iOS 7 this week and then proceeded to dunk their phones in water.