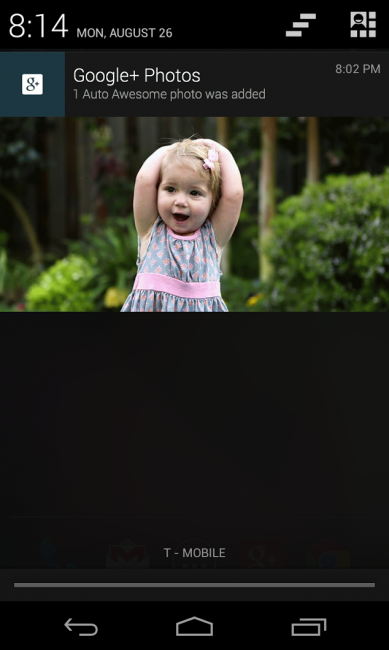 A mostly minor, bug fixing update to the Android Google+ update is rolling out today that does include one feature worth a mention – Auto Awesome notifications. As many of you know, Auto Awesome is Google+’s photo feature that takes similar photos, or those taken at specific location or time, and then combines them into things like animations, panoramas, or filmstrips. As the name suggests, it does this automatically for you behind the scenes. While that’s awesome and all, knowing that Google+ was making behind-the-scenes magic was difficult to realize unless you went into your photos and searched for “#autoawesome.” Well, until this new update.

In the most recent update, that is obviously on a staged rollout schedule, you will be notified whenever Google+ creates a new Auto Awesome photos (see image above). And that’s pretty much it.

Have you gone and searched G+ photos for #autoawesome? You may not even know that Google+ has created a handful out of your own pictures. I was certainly surprised to find a few.