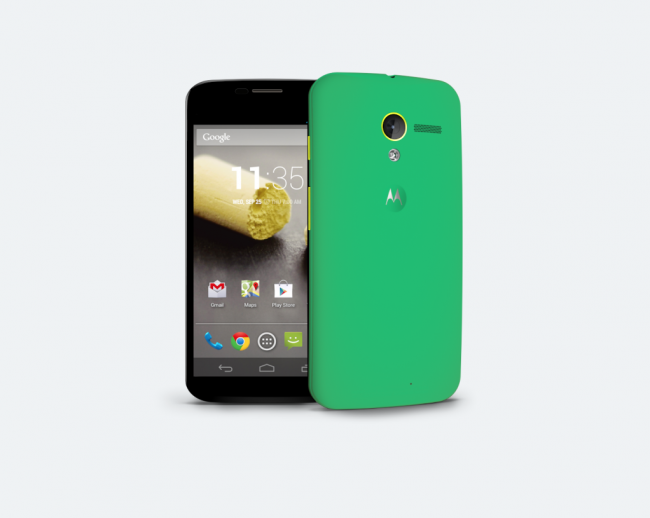 Motorola invited us to be one of the first groups to test out its new MotoMaker phone customizing service earlier this week, and this is what we came up with. Please don’t say “Oregon Ducks phone!” because we didn’t mean to go that route, even though we live in Oregon. The color scheme just looked too good! But outside of our color choices, this is how it all went down. This is our journey to create one of the first customized Moto X phones.

For reference, this is similar to the MotoMaker tutorial we published on Moto X announcement day, however, this includes the checkout process and all of the finalized colors.

Also, as you all know, AT&T is the exclusive launch partner of MotoMaker. So come launch day, whenever that becomes official, only AT&T customers will get to go through this process. Yes, that’s unfortunate. 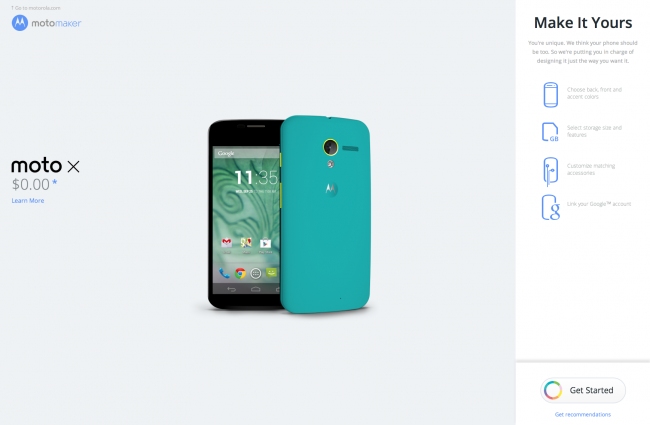 Thanks to Motorola, who gave us a promo code to setup a phone for free (press unit here, folks), this was our start screen. You can see the total under Moto X reads “$0.00” since we plugged in a code, but should you be going through MotoMaker (motomaker.com) without a code, that number would change along the way as you tweak certain parts. Actually, the only real change you’ll see in price is if you go from 16GB to 32GB, and then if you add on accessories at the end.

For those not familiar, Motorola and AT&T are offering you the chance to go into an AT&T store to get your hands on the Moto X and decide if it’s the phone for you. If it is, they’ll let you purchase a gift card with a promo code (like we used) for the amount of the phone that can then be redeemed on MotoMaker. If you know you want to buy the Moto X and customize it, you can simply go to Motomaker.com and follow this same process without a code.

So once you click “Get Started,” you are taken to the first page which is the color-picker for the back color of the Moto X. As you know, I eventually settled in on the Spearment green, but I tried Cherry, Navy Blue, Turquoise, and Yellow at one point. There are 18 color choices – wood is not currently one of them.

On a side note, if you pay attention to the bottom right corner of each screenshot, you’ll constantly see an updated “estimated delivery” time. Ours constantly said “4 days” because there are few orders in at this time, but should you choose a specific color that is in high-demand or you decide to get an engraving on the back, it could jump out past 4 days. For the most part, Motorola is striving to hit 4 days or less. 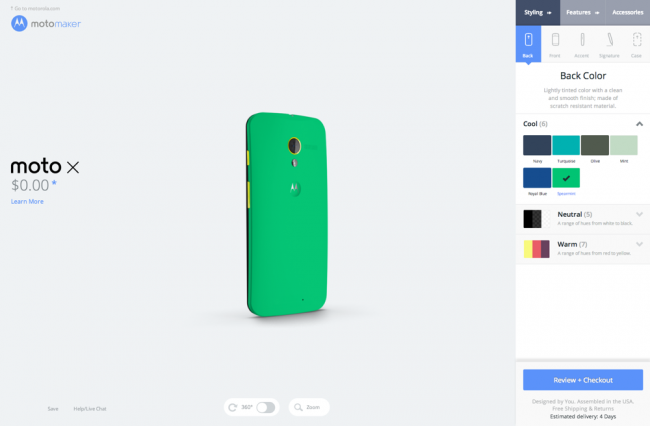 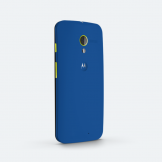 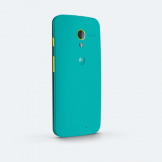 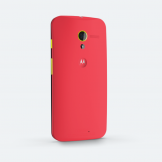 You can spin your the device around in a 360-degree motion at any time to see how your color scheme is looking. This becomes important as you move from stage to stage, as you’ll want to see how your design is shaping up. 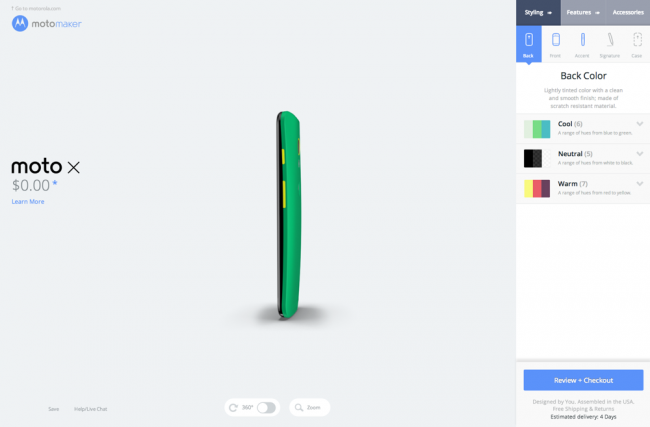 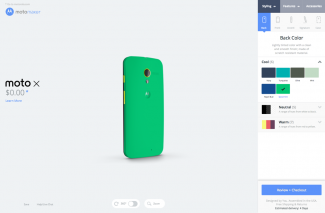 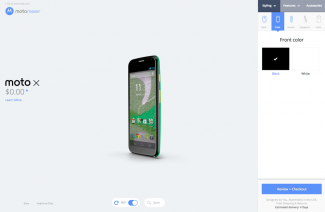 After eventually settling on Spearmint, it was on to the front color choice, which is either black or white. I’m normally a fan of white phones, but the white-spearmint combo, wasn’t doing it for me. You can see it below, but I did go with black before moving on to the accent page. Black, along with on-screen navigation buttons, gives this awesome never-ending black look with the screen off like we get with the Nexus 4 and Galaxy Nexus. 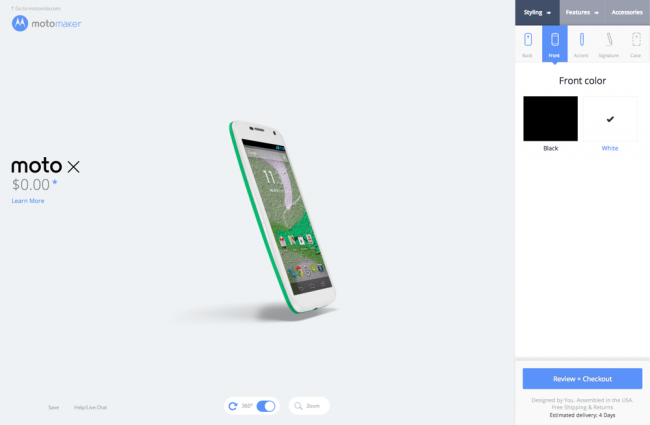 There are 7 accent colors to choose from, however, Motorola tries to match up an accent that they feel will look best as you travel throughout MotoMaker. So when I got to this point, it had already selected Metallic Yellow for me. The yellow-spearmint partnership was what I eventually settled on, but I tried all of the other colors to see how it would look. Grey and black looked extra stealth, as Tim put it, but we had to go with some extra zip. No, not DROID Zap, zip. 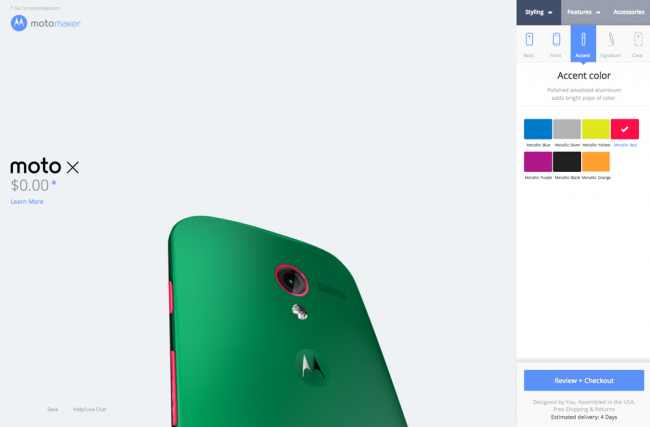 The next step is adding a signature to the back of your device, if you’d like. I should point out that “droid life” was not an acceptable choice, nor was Samsung or HTC. But Burger King, McDonald’s and Nike all worked! So clearly, Motorola doesn’t want you branding your phone with competitors’ names. They also will likely limit you on the swear words. As you’ll see in the photo below, FACKWORS worked perfectly, but we eventually settled on a more classy “D L.” 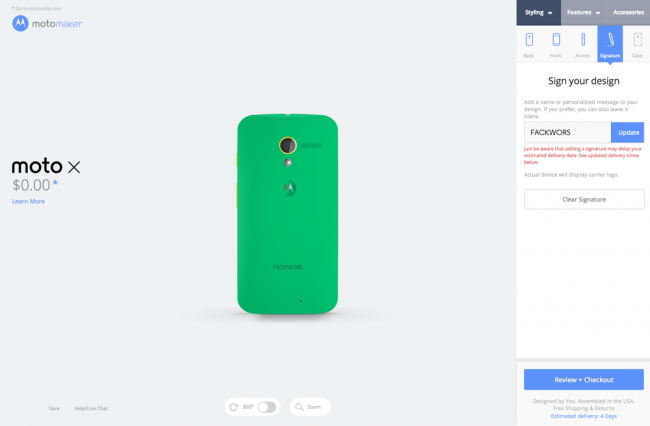 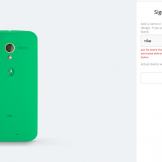 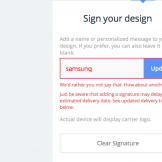 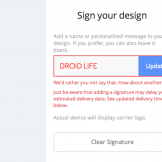 The signature is the last piece of the exterior design, unless you count the last tab, which is to buy a case that matches your new phone color scheme. So, now it’s onto internals and some software tweaks. 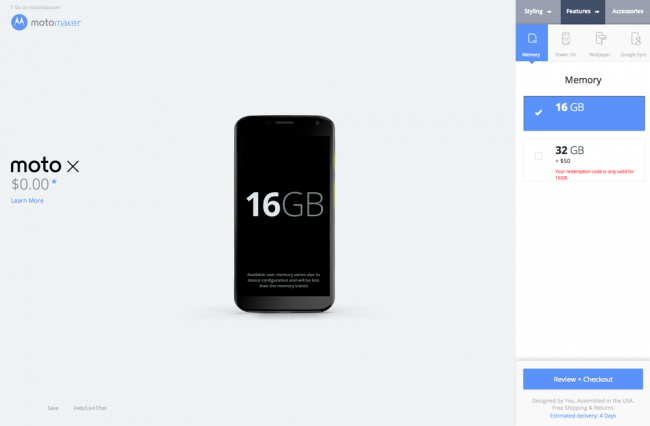 The first step is choosing your storage size. If you go with 16GB, you are looking at $199 on contract, but if you go up to 32GB the price jumps to $249. As you can see, the promo code offered to us by Motorola was for the 16GB model.

Once you have this step picked, you get to choose a Power On greeting, matching wallpaper for your color scheme, and decide if you want your Google account pre-loaded on the device when it arrives. Like with the back signature, Motorola doesn’t want you swearing or using competitors’ names. We decided to go inspirational this time around. 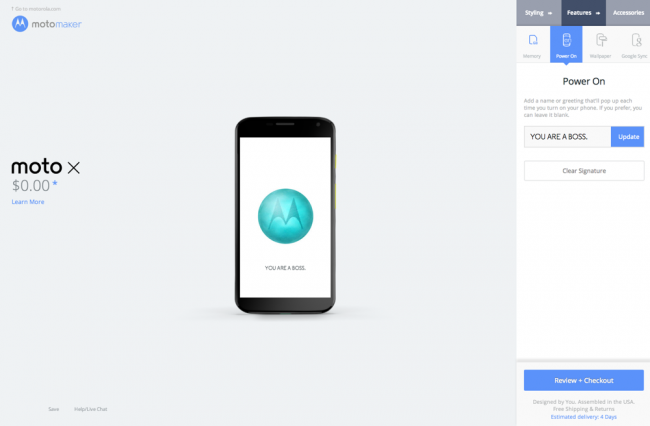 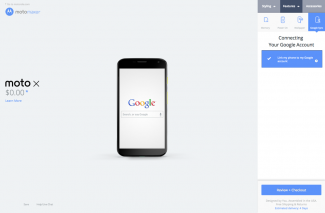 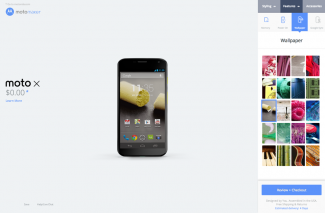 Once you wrap up with those options, you are essentially done. You can choose from some accessories, like matching headphones or whether you want a white or black charger in the box. Since we went black face, we also went black charger. We did not go for the matching SOL Republic headphones. 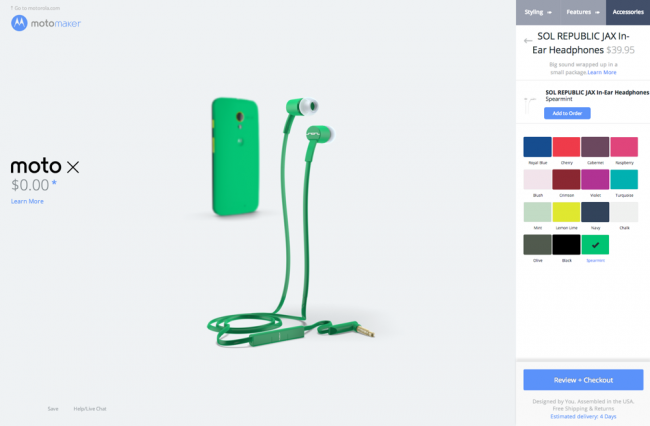 Then it’s time to checkout. MotoMaker connects to your Google accounts, so if you have saved addresses, it can pull those in to make checkout a quick process. 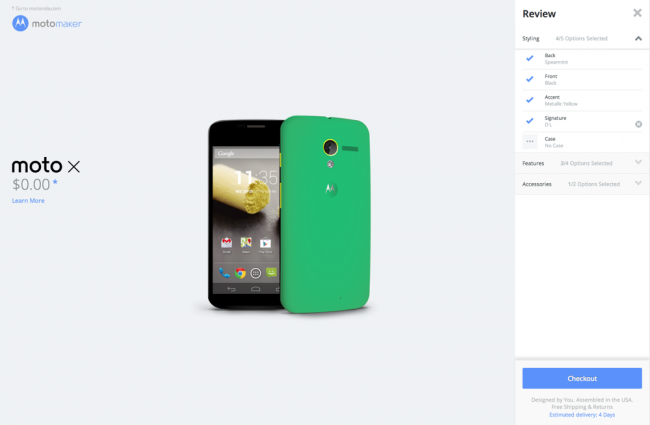 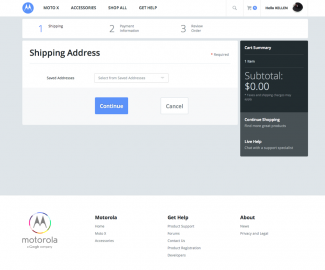 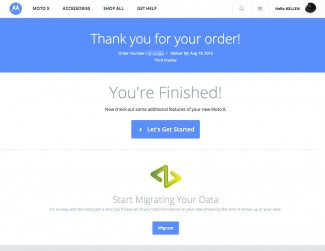 Here is the official email you receive once your ordered has been received. 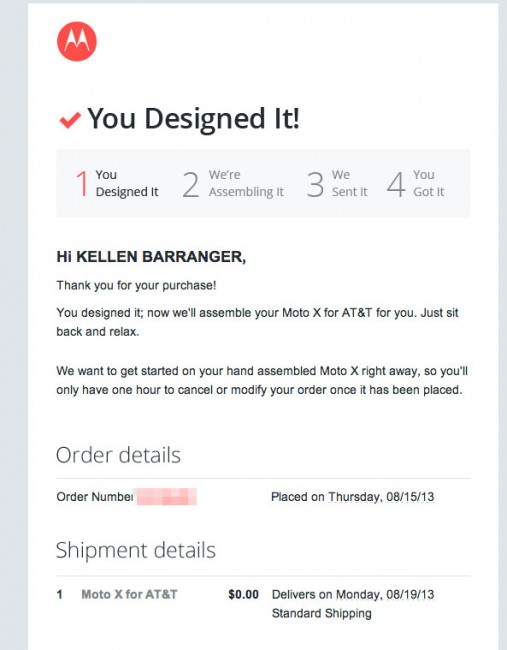 And probably the best part, is this little notification. ‘Merica.

So on Monday, we should have a shiny new custom made Moto X. Actually, we may have two, since we found a backdoor yesterday and managed to order a 2nd. Shhh, don’t tell anyone.

Overall, it’s an interesting process, to say the least. Outside of the MotoMaker site gobbling up computer resources like none other, the entire step-by-step picker is well made and laid out. I will say that deciding on a color scheme for a phone that could run you a few hundred dollars, and that you are supposed to like for two years is very stressful. What if your style changes? What if you don’t want an Oregon Duck colored phone in 6 months when football season is over? What if you take a liking to wood, which isn’t available yet? Very cool deal, making your own phone – just choose wisely.