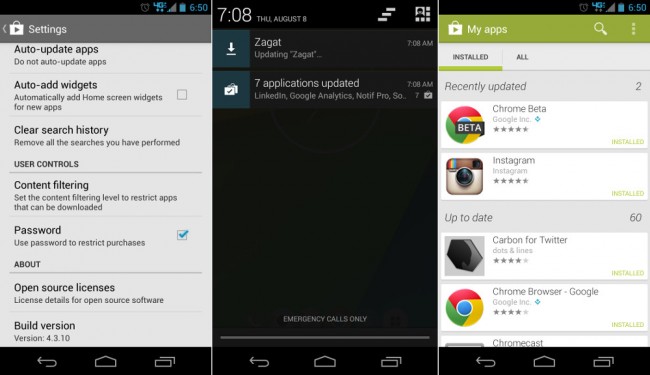 A couple of days ago, Google started pushing out an update to Google Play as version 4.3.10. The file was originally posted to a pirated app site (which we were made aware of), grabbed, and then distributed across the Android world, so we chose to ignore it and wait until the mass rollout began to be ultimately safe. That rollout has now begun. Should you open your Google Play store this morning, you’ll likely see an extra long loading time as the update automatically takes place and bumps you to 4.3.10.

The update is significant in that it makes the app update process a little more informative and less obnoxious. If you have apps that are set to automatically update or have recently updated them, a new area in your My Apps section will show “Recently updated” apps. Also, if you update a handful of apps all at once, rather than having them listed out individually in your notification bar, Google is now combining them into a counter. See, more informative and less obnoxious.

They also made some UI tweaks to Play Books and to purchase buttons, but that doesn’t really affect you.

If you haven’t already received the update, you can grab it below.

Cheers Planklongbeard and everyone else!