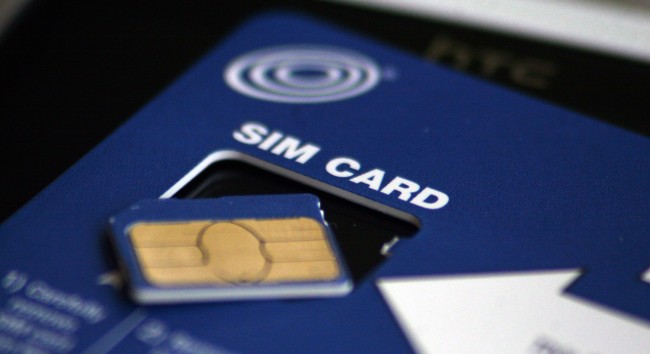 We always talk about it, the final straw that would break our back. There’s always something that the big wireless carriers could do to make us leave and take our business elsewhere. Threats however are only words until you actually decide to take the initiative and switch, but where do you go outside of Verizon, AT&T, T-Mobile and Sprint? Pre-paid carriers have always sounded exciting to the people locked into lengthy and expensive contracts, but they don’t usually have the best reputation: sketchy service, throttling data speeds, the list goes on. Luckily for you, I’ve decided to brave the unknown and dove headfirst into the world of pre-paid carriers. Let’s talk about how it went.

My family has been with Verizon ever since I can remember wireless service being a big deal. All-in-all, 14 years of service with Big Red in my family and I’ve known nothing else since I’ve had a phone. Like many of you readers, I am still clinging to the unlimited data plan and a Galaxy Nexus because Verizon hasn’t released a phone that I want to upgrade to this year. The reason I am looking to switch is because fairly soon college will be over and I am anticipating having to pay for my own cell service in the near future. As much as I’d like to keep my unlimited data plan with Verizon, I don’t think I’ll have the money monthly to do so and it could potentially disappear soon enough anyway. I tell you this because the decision to switch from one carrier to another is completely subjective, only do go through with it if it works for you.

Step One: Choose Your Phone

One of the main benefits to pre-paid carriers, other than the price, is the ability to bring your own phone into the mix and just purchase a SIM card. The choice of phones from pre-paid carriers are usually filled with mid-range smartphones that most Android fans would scoff at, so it’s good to have an idea going into it of what you want. You also have to know which wireless bands the phone supports. Some phones only support certain bands of HSPA and HSPA+ and that can directly correlate to whether or not it will work with certain SIM cards or prepaid carriers.

For the most part, when you are talking “prepaid” options, you need to focus on the “unlocked” phone market. We’re also talking about use on T-Mobile and AT&T’s networks since they are GSM/HSPA and accept a bring-your-own-phone approach, rather than Verizon and Sprint which operate CDMA networks and have the power to decide which phones can connect to them.

It’s no secret that I have a love affair with the HTC One X. This was a phone that I absolutely love and allowed it to dictate which carrier I would go to. The One X features a radio that supports the 850/900/1900/2100 Mhz bands for HSPA. These bands only pick up on the HSPA that AT&T puts out, not T-Mobile (T-Mo is currently refarming their 1900). That distinction right there narrowed my choices of carriers drastically (which I will talk about later) and is why you want to pick the phone you wish to use first before you move forward with the rest of the steps. 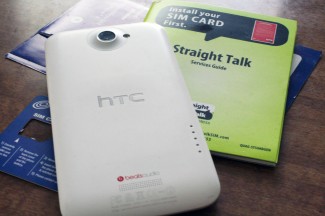 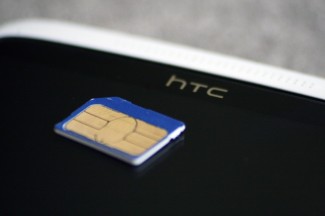 Now comes the part that we’ve all been waiting for, the actual pre-paid carrier. Once you have decided which radio bands you will be rolling with, be it T-Mobile or AT&T, you can make a choice on who you will be giving your money to. Traditionally Straight Talk Wireless has offered SIM cards for both carriers, but as of recently with the launch of AT&T’s Aio, they can be hard to come by. Now, since I really wanted to use my One X I ended up buying a AT&T Straight Talk SIM card off of Amazon (risky I know, but I really like the One X). Luckily for me I had no problems with a faulty or stolen SIM card and everything worked out well for me when it showed up. Straight Talk however is not the only carrier to choose from, there are a few more to choose from:

These are the pre-paid carriers around the country that allow you to bring your own device. Companies such as Boost Mobile, AT&T’s GoPhone program and Virgin Mobile all have fairly low monthly payment programs, but the selection of phones is dismal. What’s the point in breaking off from a big carrier if you aren’t on a phone that you love?

Step Three: Activate your SIM and Use Your Phone!

Once your SIM card and the phone you want to put it in arrive, pop that sucker in your phone and activate it. Straight Talk allows you to choose to pay manually each month, or have them charge your bill automatically when it is time. Once this is decided on your carrier of choice, activation usually only takes one phone call and a bit of waiting before your device is up and running. Occasionally the phone’s radios need pointing in the specific direction of your pre-paid network, so some tweaking in the settings of your device might be necessary, but it’s nothing too daunting.

Low Price, Duh!: The point of this whole experiment was to save some money. $45 each month for an unlimited amount of texts, minutes and data is just too good to pass up. Granted the data speeds aren’t LTE (more on that later), HSPA+ and 3G do a fine job of providing my data when I am not on WiFi. Knowing that I could end the payments at anytime that I wanted is a good feeling for added measure. Talking with the owners of my family’s plan (aka my parents) we sat down and looked at the numbers comparing a 14-year old, 4 device Verizon plan to if we all switched to a pre-paid network. We would be saving over $100 each month if we made the switch, and that’s a decent amount of change.

No Contract: It’s pretty satisfying to know that you can end your contract whenever you want. If things get tight one month and you need to save a few bucks, it’s as easy as a few clicks to end your service. You aren’t locked into a contract for two years, if your service sucks you can move to another service with the same phone. It’s overall just awesome to have that freedom.

Phone Selection: As we’ve talked about before, these carriers that allow you to bring your own unlocked phone are awesome for Android lovers. See a phone over in the UK or Japan that you want to use? Just make sure that the GSM bands will work over here and you are all set to go. Nexus devices from the Play Store work here as well, and that keeps you as close to Google and Android as you can get. We’re even seeing companies like HTC being to sell their newest unlocked phones directly to consumers in the U.S. 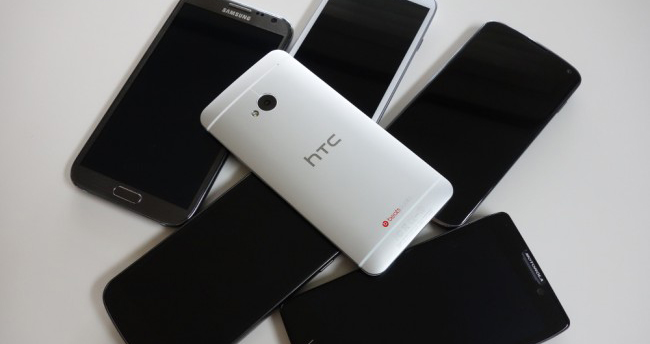 Battery Life: 4G LTE is great and all, but in the past it sure did a job on the battery life of any phone that it was featured on. HSPA and HSPA+ have decent mobile speeds and don’t destroy your battery as quickly as LTE will. Granted, any power user who is watching YouTube videos all day and streaming music is going to have a low battery life, the difference between the two radios is definitely noticeable.

HSPA+:  Depending on the prepaid carrier you go with, you can see HPSA+ speeds that are on par with LTE networks. Kellen gave me the screenshots below that show off the T-Mobile HSPA+ prepaid speeds he sees on his Nexus 4. The upload numbers may be capped, but the downloads of around 15 Mbps are nothing to laugh at. 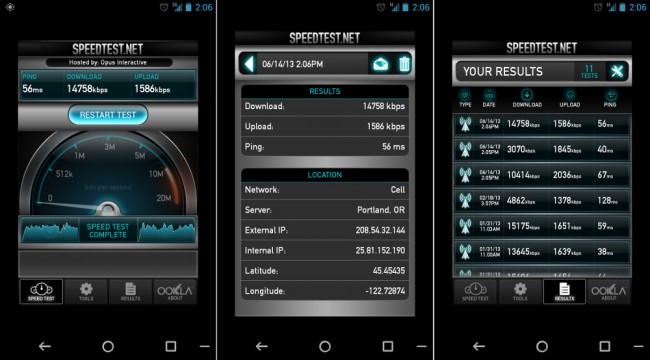 (Above: Kellex’s SpeedTests from a Nexus 4 on Solavei using T-Mobile bands)

Not LTE: I’m not going to say that we are spoiled with our fantastically fast 4G LTE speeds, but we kind of are. After being on Verizon’s reliable and large network, transitioning back to HSPA was a shock to the system. Of course comparative SpeedTests aren’t going to be close, but only getting 3 Mbps on HSPA prepaid when Verizon and AT&T can offer 15 to 20 Mbps on LTE is a big difference. As for an everyday test, I used Google Music streaming as a real world example. Unfortunately, since I was only on HSPA, buffering took substantially more time than on a LTE connection.

Another slightly annoying thing about unlocked phones is that the radios tend to switch between HSPA and 3G frequently. I’ve talked to Kellen about this and it seems to be something that unlocked phones do when brought to the States. It doesn’t render the phone useless, but the phone can sometimes get hung in switching between networks before loading your Twitter feed or sending a message. You can see it clearly in my SpeedTest images below. 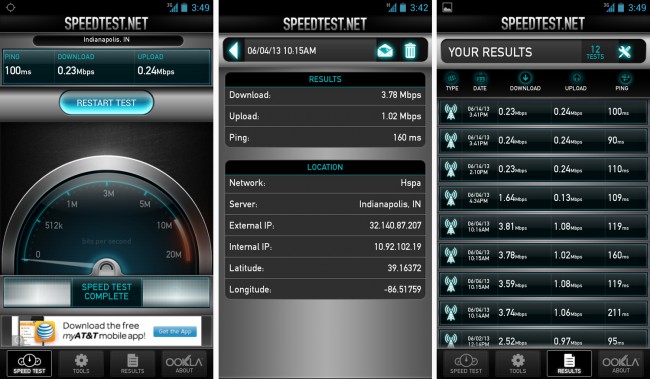 (Above: my most recent SpeedTest, the fastest I could get and the overall list)

Data Throttling: Everything when you sign up for service with these carriers promises “unlimited” data, but deep in the fine print of each of them you’ll read that data is only “unlimited through x amount of data.” Meaning if you use too much data on their network your speeds are going to get cut slower than they already are. I personally never ran into the point where my speeds were slower during my time, but I kept WiFi on most the time around the house to get better downloads. Depending on the prepaid carrier, you could see throttling after anywhere from 2GB to 4GB of data.

Is pre-paid right for me? After giving it a test run for nearly two months I feel like the answer is no. As someone who depends on a mobile network for streaming music and video a lot, using Straight Talk just hasn’t given me the same performance that Verizon has. Another combination of a prepaid network and phone could yield different results for you, though. The savings in money are nice, but I don’t think that they are substantial enough to justify the trade offs. Sure Verizon isn’t the place to be if you want all the best Android phones, AT&T seems to have taken that spot, but the two big carriers offer a lot that we seem to take for granted.

Does switching to a pre-paid carrier sound right to you? Can you give up the things you have with Verizon, AT&T, Sprint or T-Mo to save a few extra bucks? If you have made the switch, feel free to share your experiences in the comments.