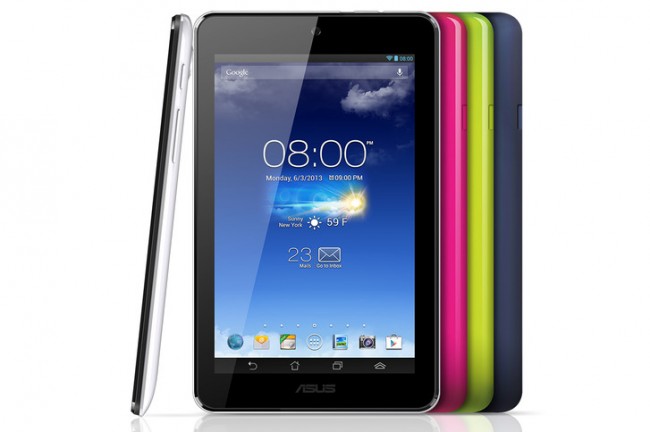 At this year’s Computex, ASUS unveiled a full lineup of new Android tablets, including two new MeMo Pads, the HD 7 and FHD 10. Both are entry-level devices, bringing decently capable specs, but also featuring some low price tags. While the previous MeMo Pad models were somewhat of a joke in terms of specs in order to keep the price as low as possible, these new devices don’t seem that bad at all.

The HD 7 is scheduled for a July launch, but for those wanting the FHD 10, you will need to wait until September.

MeMO Pad™ HD 7 has 16GB of storage and a MicroSD card slot, plus 16GB ASUS WebStorage free for one year. Together with the ASUS WebStorage Office, users can view, create, edit and share Microsoft Office documents online.

MeMO Pad™ FHD 10 is just 9.5mm thick and 580g light, and its lithium polymer battery lasts for up to 10 hours with 720p video playback. The ‘micro-weave finish’ is available in Royal Blue, Silk White, and Vivid Pink.

The Persona Cover for MeMO Pad™ HD 7 is also available. Available in black, pink and green, this is a snug-fit case that protects the tablet from everyday bumps and scrapes.

AVAILABILITY & PRICING
ASUS MeMO Pad™ HD 7 has an MSRP of US$129 for 8GB capacity and US$149 for 16GB, and will be available starting in July 2013. Please contact your local ASUS representative for further information. Product images are available for downloadhere.

ASUS AT COMPUTEX 2013
Visit the ASUS Computex 2013 stand in Taipei from 4th to 8th June. The ASUS stand is at Booth M0810, Nangang Exhibition Hall 4F at the Taipei World Trade Center.

ASUS is a worldwide top-three consumer notebook vendor and maker of the world’s best-selling, most award-winning, motherboards. A leading enterprise in the new digital era, ASUS designs and manufactures products that perfectly meet the needs of today’s digital home and office, with a broad portfolio that includes motherboards, graphics cards, optical drives, displays, desktop and all-in-one PCs, notebooks, netbooks, servers, multimedia devices, wireless solutions, networking devices, tablets and smartphones. Driven by innovation and committed to quality, ASUS won 4,168 awards in 2012 and is widely credited with revolutionizing the PC industry with its Eee PC™. ASUS has more than 12,500 employees around the globe with a world-class R&D team of 3,800 engineers. Company revenue for 2012 was approximately US$14 billion.