To say that readers were disappointed at the lack of SMS support in Google’s new Hangouts application is probably somewhat of an understatement. People are 100% ready to make Hangouts their number one way of communicating via phone, but if SMS (text message) support isn’t there, it becomes difficult, because not everyone you know is going to be up for switching their life over to Hangouts. We had heard through sources of ours that Google Voice support was eventually coming, but that it wouldn’t be a part of the service at launch – something that ended up being true.

Now, according to Google’s G+ community manager of Hangouts and Chat, Dori Storbeck,  SMS is one of their most requested features and will be “coming soon.”

On a related note, if you stop by your Google account settings page, you’ll see an area labeled “SMS for Hangouts.” Tough to tell if this is new or not, but it does appear to be a way “to receive messages from Google+ Hangouts as SMS, when you are idle.” Unfortunately, the U.S. is not one of the countries listed. 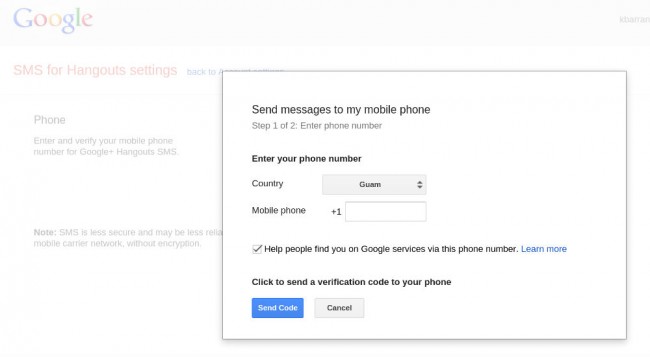 So it is coming, we just don’t know when. Hang in there, folks.