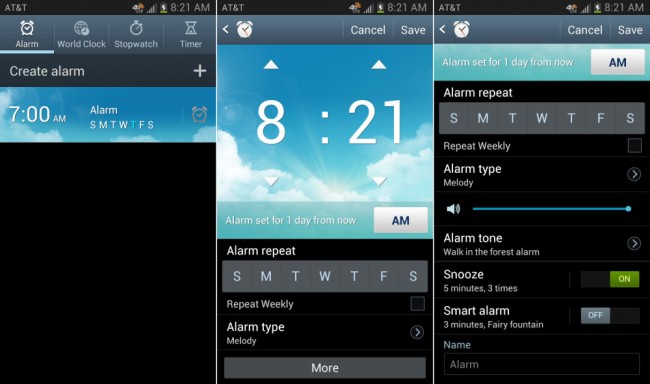 Does anyone actually own a physical alarm clock anymore? You know, one of those big boxes with glowing lights, the worst radio speaker in history, and that likely has a broken limb thanks to being knocked off your night stand a time or two? For many, you could put these in the same category as dinosaurs as most have switched over to their phone full time as an alarm replacement. After all, your phone is with you every step of the day, including during times of travel, so why not make it your bedside and morning companion?

In this quick guide, we’ll look at setting up an alarm in the simplest of ways. This isn’t rocket science, but it’s definitely something you should all know how to do. The only tricky part depends on the type of device you have. Motorola, stock Android and Samsung all do things slightly different, so we’ll take a look at each.

1.  For the most part, you aren’t going to find an app in your app drawer that actually says “Alarm.”
2.  Instead, you’ll want to look for “Clock,” as this has become mostly universal.

*In some instances, like stock Android or Motorola phones, you can tap on your main clock widget to enter alarm settings.

3.  Once you have entered the clock app, the setup is going to vary depending on the phone.
4.  In almost all instances, though, look for the + as it will almost always create a new alarm.
5.  Once you have started a new alarm, you can tell it to do a variety of things

6.  Once an alarm is set, your screen should tell you a quick countdown for when it will go off next.
7.  To turn off alarms, a simple box uncheck or alarm icon tap should toggle them.