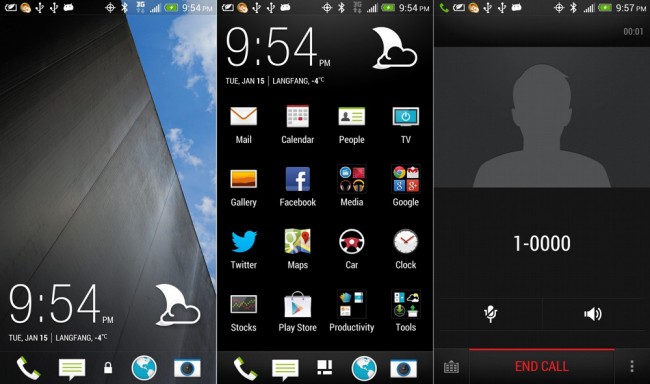 After seeing the picture of Sense 5.0 up and running on a DROID DNA, XDA member mdeejay brought up the fact that the phone is actually running a ported build from a Sprint M7 which has the new Sense on it. He claims to have it working nicely, but can’t release it at this time. Thankfully, he was able to at least share some screenshots from it, so that we can see some of the changes in store in this latest version of HTC’s Sense.

First, you can see the new lock screen which appears to have finally ditched that obnoxious ring-unlock mechanism. We’re also getting a much less cluttered and minimal clock and icon set, but we have seen those before. On one of his home screens, he has a number of apps laid out, along with the arrangement for folder icons. We are definitely seeing new icons across the board for mail, calendar, people, gallery, etc. There is a view of the in-call menu, which also appears to be simplified.

Down below, you have a somewhat back-end look for settings. It looks re-themed, but that’s about all there is to say.

If you want to keep up with a potential ROM release of this new Sense from mdeejay, I suggest you stay close to the XDA thread below.