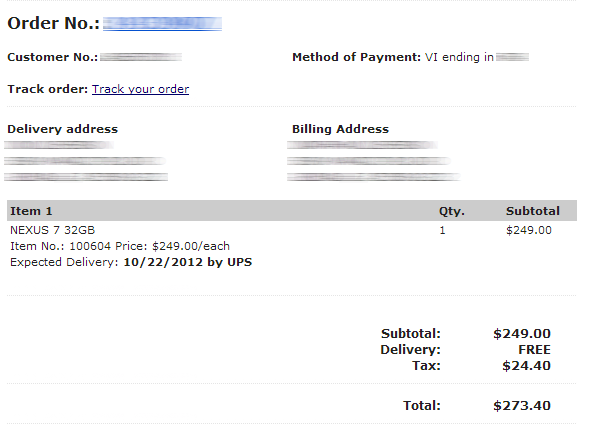 Aren’t interested in waiting for Google to announce the new Nexus 7 with 32GB of storage on October 29 in NYC? You may be able to order one from Staples, today.

One of our readers took the item number that leaked over the last week (#100604), contacted their sales department, and was able to purchase the device. As you can see from the order sheet above and the shipping info below, it has already left the shipping center and should arrive on his doorstep by October 22.

If you listened to the first episode of The Droid Life Show, then you probably heard us first report that some shipments were already arriving at distribution centers on 10/17, with mass shipments hitting locations on 11/7. What I’m saying, is that it is possible to order a new Nexus 7 today, because some locations do indeed have a few in stock.

Our reader started a chat with support through the Staples website and was then transferred to sales. Feel free to give it a shot and let us know how it goes!

Update:  Our reader said he just received a call from Staples, informing him that they had to cancel his order due to contract details with Google. He was told that he could re-order on October 29.