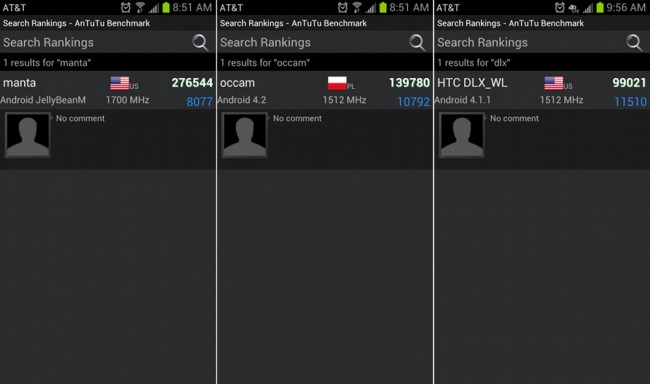 On Friday, we were introduced to two new devices that could turn into the next Nexus phone and tablet, the “occam” and “manta” respectively. We have no idea who is making these devices, even if some are jumping to the wild conclusion that they are made by Motorola. While we would love to see a Motorola Nexus, a codename is just not enough to go on to assume that this is made by them. For all we know, the “occam” is the oft-rumored LG Nexus phone and the “manta” is the Nexus 10 made by Samsung.

To help validate the case that these devices are real though, we thought we should point out that the devices have been benchmarked in AnTuTu. The “manta” is showing up as running a 1.7GHz processor and Android version “JellyBeanM.” The “occam” is showing up with a 1.5GHz processor and Android 4.2, the version of Android expected to debut in the next month on the next Nexus.

We can’t necessarily tell what type of processor either is running, unless we compare the “occam” to a benchmark run on the HTC DLX (or what some are referring to as the “Incredible X“). The DLX is expected to be HTC’s newest flagship device with a 5” 1080p display and quad-core Snapdragon S4 Pro processor. If you look at the “occam” and the DLX, the processor speed is identical at 1512MHz. This could be a coincidence or it could mean they are running the same chipset.

If it helps the cause, the LG Nexus is reportedly based off of the LG Optimus G which also runs a Snapdragon S4 Pro.

Via:  Blog of Mobile