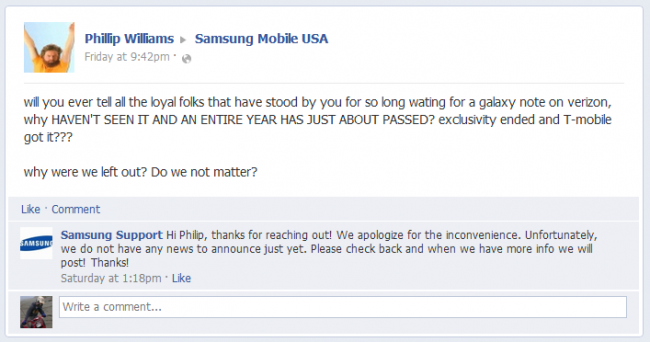 After a vocal Samsung supporter took to their Facebook page to see whatever happened to a possible Galaxy Note release on Verizon, Samsung’s Relations team had an interesting answer for him. Instead of saying that nothing was coming for Verizon customers or completely ignoring his inquiry altogether, Samsung mentions they have nothing to “announce just yet.” We can’t help but feel that this response could hint at something to come.

They go on to say that Mr. Williams should check back when they have more info. Could it be the Galaxy Note 2 that is to be announced at this year’s IFA? Something else? Or this could be another “Whoopsie!” by another PR rep on an OEM social network page. Come on, Samsung. Don’t tease.