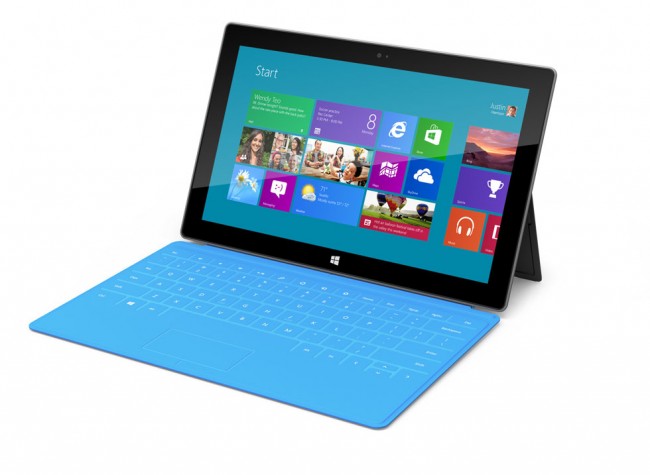 While Microsoft hasn’t announced important details about Surface like battery life or pricing, it’s safe to say that the hardware alone is intriguing. While Surface doesn’t look like an iPad (it’s made with magnesium instead of aluminum), its keyboard cover and built in kickstand position it in both the consumer and professional space. In fact, the color options for the keyboard covers look eerily similar to Apple’s Smart Covers. Make no mistake about it – Microsoft wants to go head to head against the iPad because they know that the iPad is slowly eating computer sales left and right.

Microsoft has a key advantage over the iPad, however, in that Windows can do things that the iPad can’t. Microsoft’s success may ride not only on battery life and price, but on emphasizing those differentiating features against the iPad. If Microsoft wants to win in the tablet space, they need to take sales away from Apple, not Amazon or Google.

That leaves Amazon and Google to compete for the low end. It’s no secret that Android tablets haven’t sold well. The only marginally successful tablet compared to the iPad has been the Kindle Fire, which is free of Google services.

Based on the rumors, Google is done trying to challenge the iPad head to head and I don’t blame them. It takes a lot to challenge an incumbent in a space and Google wasn’t able to deliver. If the rumors are to be believed, Google thinks its best bet is to steal the bottom end of the market from Amazon and leave Apple the pricier side of the market.

At Google IO I’m expecting Google to blow the Fire away and ignore the iPad and Surface. Google needs to get their ecosystem in place before they can really challenge the iPad; taking down the Fire won’t take much. Taking down the Fire puts Google in control of Android tablets again and warns other OEMs against forking Android. If Google can control their OS and get developers to make killer Android apps, Google can go for the iPad and Surface.

Microsoft is making huge bets on the company with Windows 8 and by competing with its OEMs. Meanwhile, Google is in the process of befriending OEMs with the new Nexus program and playing the long game against Apple. Surface looks like really compelling hardware, but without pricing and killer Metro apps it will fail in the market. Microsoft has zero credibility in the tablet space. They don’t want to risk fighting for third space in tablets like they are phones.

Google has the money and the resources to play the long game with Apple. Google has a much better relationship with consumers in mobile thanks to Android. If Google can harness that relationship from Android in conjunction with Google services and hardware, they may have a shot at killing the Fire first and the iPad later.