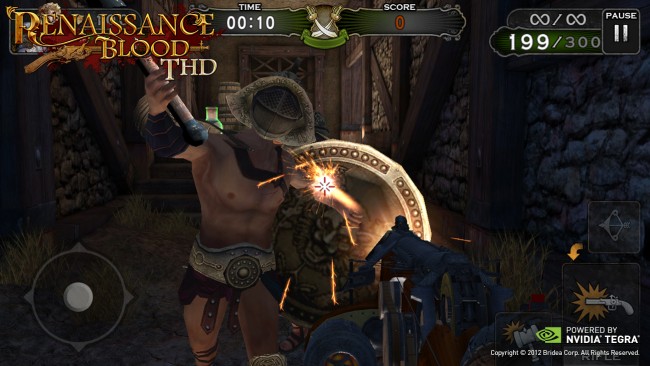 We have sung the praises of the Tegra 3 quad-core chipset, and one of the biggest strengths of it is the muscle that it can put into mobile games. The latest game to take advantage of all this processing power is Renaissance Blood THD that just hit the Play Store today. The story sets you in times long ago, just after Leonardo Da Vinci has passed away, and you are scouring the ancient worlds trying to find the blueprints to his final machine.

You’re decked out with a crossbow, with unlimited ammo, a hammer for smashing things and people and a gun (which is assumed Da Vinci made since guns weren’t exactly around at this time period.) Once you know your mission, there are no shortage of baddies and bosses to mow down.

But there still remains the problem of on-screen controls. The game is relieved of some of the angst because since it is on-rails, you don’t have to look around, the game does it for you. But even still, trying to aim under duress is still not a fun experience. The graphics are good, but don’t think that these are on-par with an Xbox 360 or Playstation 3. At it’s best, the game looks like a PSP game, or an early 360 game if I’m being generous.

When you do get somewhat control of the shooting mechanics the game can get pretty intense but I found myself getting beat up repeatedly because my thumb was in the wrong place.  The game overall is pretty fun, its easy to drop in and kill some people and then be on your way. I would recommend the game to anyone looking for a good shooter on the tablet because it’s one of the best so far. But there is still lots of room for improvement. The game can be picked up for a pretty fair price of $3.99 in the Play Store.