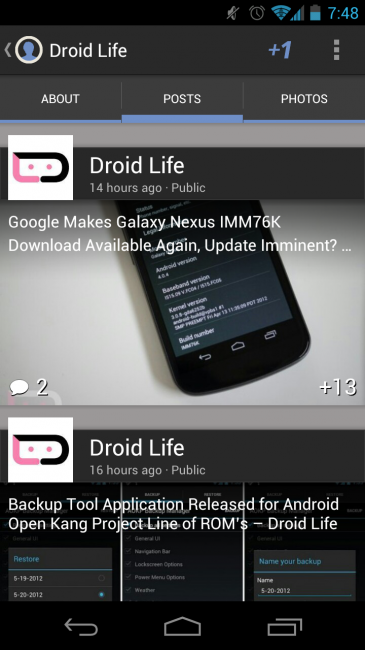 Two things immediately come to mind when I look at this shiny new Google+:  big ass images and incredibly easy Hangout starting. That’s right, folks, the new Google+ update that was released to iOS a couple of weeks ago has finally arrived on Android. And damn does it look nice.

The first thing you’ll notice is the revamped Stream which includes, again, big ol’ pictures. But more importantly, for navigation, you get a ribbon on the left side that features quick shortcuts to anything that you feel like accomplishing in G+ – Hangouts would be the new option to the party. Starting a video chat with multiple friends has never been this easy, has it?  The Google+ team also tossed in some fun transitions as you scroll through your feeds, the ability to download pics as wallpapers, a chance to edit posts inline, and more. Go get it.