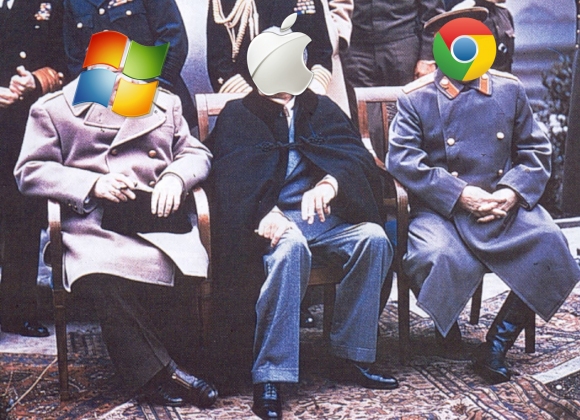 The battle to dominate the mobile market has never been about smartphones. Android, iOS, and Windows Phone are attempts to use the most personal computers ever made to lock users into one ecosystem. Google is using Android, an open ecosystem, to lock users into Google apps and services.

Google recognized the future of computing was moving towards mobile after the release of the iPhone. Before the iPhone no one envisioned mobile as being anything more than Windows laptops with rotating, resistive touchscreens and Blackberry-like phones. The iPhone and iPad revolutionized the way we interact with mobile devices, for better or worse. Ever since then Apple, Google, and Microsoft have been waging a war over ecosystems. Microsoft decidedly won the desktop battle, but Apple made a huge comeback in mobile with the iPhone and the iPad.

Apple has often been accused of misunderstanding the Internet, but I think what was perceived as misunderstanding was really simply a vastly different vision of what the Internet should look like. Apple thinks that the Internet should be divided into apps instead of tabs. Apple believes that users should let Apple make decisions about how they see and process information. Apple has severely limited Safari on iOS for this reason – they want users to access data and information through apps, not a browser. Apple believes that this way of accessing the Internet makes it cleaner, safer, and more profitable.

Microsoft is the wealthy incumbent. Having won the first battle, Microsoft slowed its innovation, giving companies like Apple and Google the opportunity to define and then dominate the next battle. Microsoft has a history of making products that are cheap, but good enough for most people to use. Windows and Office are classic example of this strategy, and it has worked on the desktop. In mobile, however, cheap and decent isn’t good enough.

Phones have becomes the most personal computers we have ever seen. They are with us all the time and store some of the most personal information we have. Windows Mobile was a failure because Microsoft failed to realize how important mobile would be. In the last five years we’ve seen a massive shift towards mobile computing becoming the dominant platform. For many things desktops and laptops are still superior, but mobile devices are becomin better adapted to the traditional tasks demanded of desktop computers.

As a result of this shift, Microsoft is getting crushed in mobile with Google and Apple controlling a space that Microsoft should have dominated. Bill Gates was raving about tablet computers far before anyone else saw the vision, but Microsoft continued to miss the mark by simply trying to recreate Windows on a smaller screen. Windows Phone and Windows 8 are massive jumps in a totally new direction and Microsoft is betting a lot with its latest vision of mobile computing. It has the services that people need, but it needs to have the consumer facing products that people want. Mixrosoft’s vision is similar to Apple’s in that they want to control the experience, but Microsoft is risking loosing enterprise, its bread as butter, by changing the way that Windows works so dramatically. Microsoft is trapped between consumer demands for something new and enterprise demands for a consistent product with legacy support.

Finally, Google believes that for better or worse, computing should be a totally open platform that is “free” for anyone to use. For the cost of targetted ads, Google wants to provide every service possible. Sure, there are some things that ads can’t buy, like apps or media, but Google wants to provide the services for freemium. Google’s vision of computing is essentially a cross between Microsoft’s and Apple’s. Google has a closed ecosystem in terms of the Play Store and Google apps, but in terms of what you can do there are no limits. Android on phones is similar to iOS in its app-centric approach, but apps like the browser don’t suffer from limitations like a lack of Flash support or the inability to download files. Android on tablets, on the other hand, follows Microsoft’s approach in that it feels and acts more like a desktop computer than a mobile one.

Choosing Google, in short, means that you support an open web and an open ecosystem. Unlike Apple, Google has no desire to control how you use their services. Unlike Microsoft, Google doesn’t make good-enough products and services in terms of usability. While Google still struggles with design for some of its products (Gmail still looks like it was made in 1997), its products just work. Office 365 may compare in terms of the products it offers, but they don’t work as well as Google’s services. Apple offers iCloud to store data, but unlike Google, Apple limits what apps can use that data. Supporting Google means supporting computing that lets you do whatever you want with your data on services that work well.

Sometimes people get emotional in the comments about Google and Android. Often I think this is just an emotional reaction to someone criticizing a product that people like, but I think there is something more to it than that. Apple, Google, and Microsoft have extremely different views of the future. Choosing between Apple, Google, and Microsoft is going to become increasingly difficult for users as each company tries to lock users into their services. The phone you choose, and therefore the ecosystem you support, may have a bearing on what the future of computing looks like.