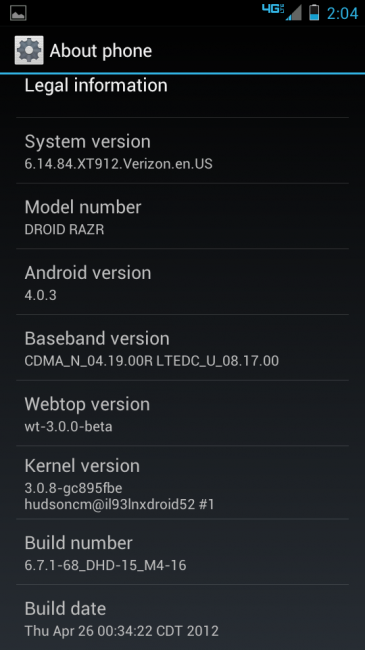 A new Ice Cream Sandwich build for the DROID RAZR and RAZR MAXX has leaked within the last  day or so as build 6.14.84. We are hearing that the file size (roughly 343MB) matches that of the file listed in yesterday’s VZW update schedule, so this could be the official build assuming it passes all tests. Our reader has been testing the build over night and we are hearing that the file may be released to the public within the next hour. The folks at DroidRzr.com will have it, but we will be updating this post to let you guys know.

Once released, it appears as if you will need to be on build 6.12.181 in order to apply it. If that sounds familiar, that’s because 6.12.181 is the new OTA update that started rolling out at the beginning of the week – another sign that this ICS might be the one.

Update: It has been released. Here is a link to the download and instructions on flashing.

Update 2:  Folks are already reporting some bugs that VZW likely won’t let pass. This probably won’t be the official version. Seems like we are getting pretty close to being there though.