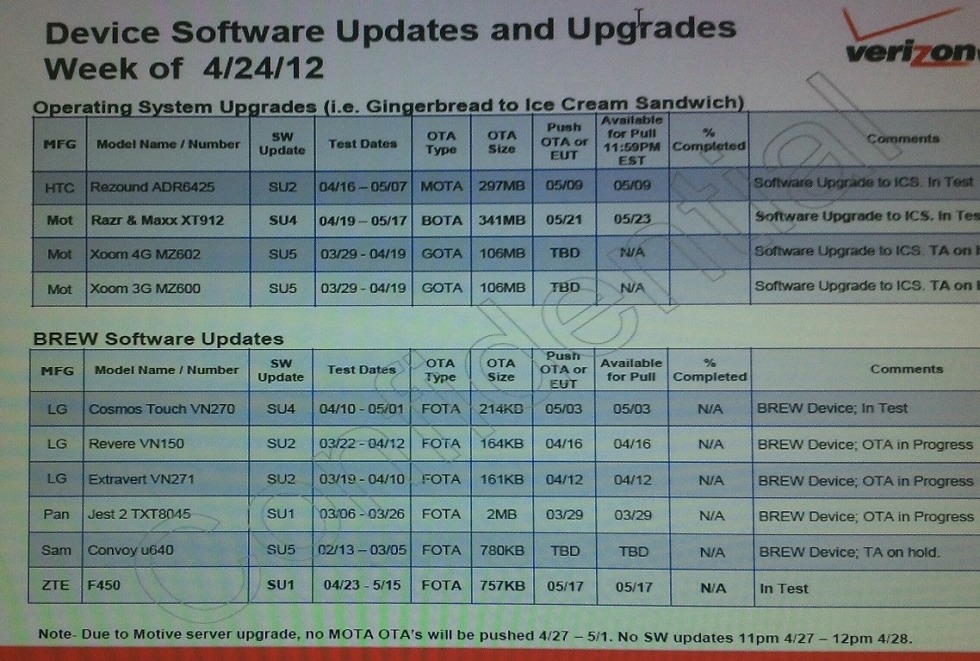 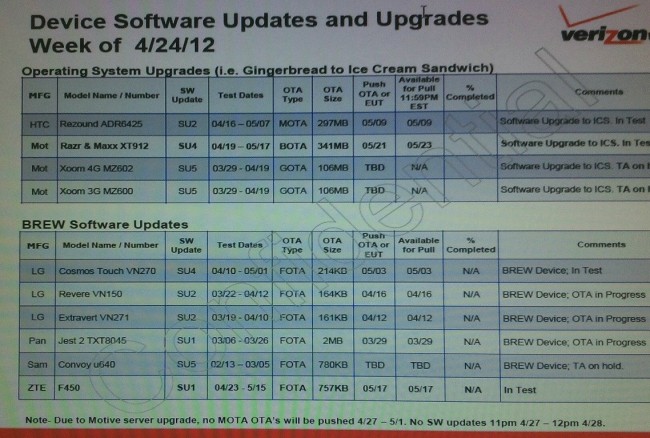 If you were looking for information about the next OTA update for a phone on Verizon, a reddit user by the name of DroidTosser has you covered. His latest post that went up within the last hour, gives us details for updates on just about every VZW device currently available. We’ll start first with the screenshot you are seeing above which talks Ice Cream Sandwich, but won’t stop there as the info is plentiful.

According to this screenshot, the ICS updates for all three of these devices are in testing. The Rezound will finish testing on 5/7 while the RAZR and RAZR MAXX will go until 5/17. After that, assuming they pass Verizon’s internal tests, we should see them become available to devices (possibly 5/9 for the Rezound and 5/21 for the RAZRs). It wouldn’t surprise us if you see soak tests for the RAZRs go live some time shortly after the 17th, again, assuming all is well and Big Red doesn’t send it back to Motorola to fix anything.

The XOOM on the other hand appears to be ready to roll. The “GOTA” mention up there means that the update is coming directly from Google, but that it still needs to a “TA” or technical approval and is on hold. Testing looks as if it is done though and we are simply waiting for someone to press “Go!”

According to the rest of these screenshots, updates for the Bionic, Thunderbolt, Revolution, Galaxy  Tab 10.1, and Xperia Play are all in testing. We aren’t sure what these updates are, but they have not been listed separately as Ice Cream Sandwich related. The Incredible 2 may have an update that has been approved already, but for whatever reason, the OTA push has been delayed.

As you will notice after clicking through the thumbnails, the Galaxy Nexus is no where to be found.