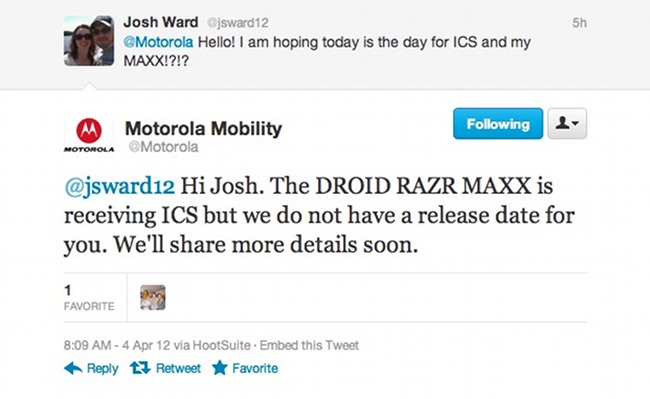 According to Best Buy, today was supposed to be the day that both the DROID RAZR and RAZR MAXX received the much anticipated Ice Cream Sandwich update. We normally aren’t one to believe everything that a screenshot says when in involves an update, but seeing an invite from Motorola for owners of both phones to test software go out shortly after the BBY leak, followed by a leaked Android 4.0.3 ROM, we thought that we may be on the verge of glory. But today is here and so far, we haven’t heard a peep nor have Motorola Feedback Network members been prompted with a thing.

Update:  The update is not Ice Cream Sandwich and is instead build 6.12.181. Full details here.

Owners of the RAZR have taken to Twitter to see if they can get Motorola to spill the beans and all they will say is that the device is indeed receiving ICS, but that they do not have a release date at this time. They should have “more details soon.”

I don’t want to read too much into that, but it definitely doesn’t sound like we are months away if they are using the term “soon.” Could we still see it some time this week? Would be a wonderful surprise.