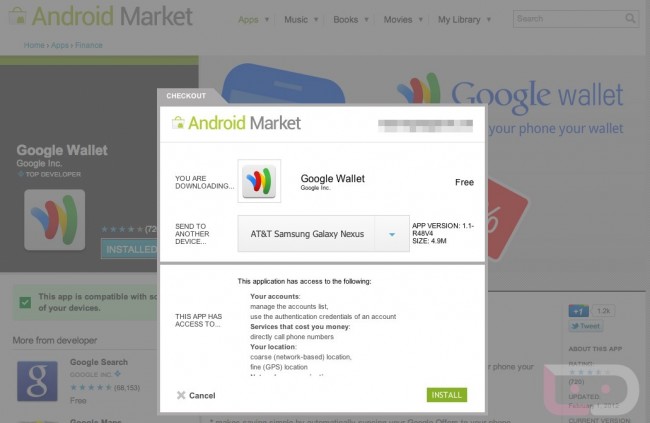 By now, most of you know the story behind Google Wallet and the fact that it has only been officially available to the Nexus S 4G on Sprint, something that irritates the hell out of all new Galaxy Nexus owners. The other 3 major carriers here in the U.S. (Verizon, AT&T, and T-Mobile) have their own NFC payment system in the works and would rather you not use a competing service while they finalize everything. Basically what I’m saying is, that they have asked that the app be hidden from all phones with NFC chips that are activated on their networks. The app itself is in the Android Market, but if you attempt to view it from a phone, you will come up empty.

Enter today. I was cruising around in the market doing some research on a tip that came in and noticed that Wallet was now showing as being available to my GSM Galaxy Nexus which is running an AT&T SIM card. In the past, as in back in December, that screenshot above looked entirely different. I know that Wallet was updated for some users yesterday, but it’s almost impossible to tell if the note that reads “Small changes for device compatibility” was a part of it. If it is, then GSM users, jump on it!

As far as Verizon goes, the LTE Galaxy Nexus is still not showing as supported. I’m in the middle of looking into something that has to do with it and will report back on my findings. For now though, feel free to ask Big Red on Twitter why AT&T has given the thumbs up, yet they still won’t.

Update:  We figured out how to install Google Wallet to the LTE Galaxy Nexus. Instructions here.