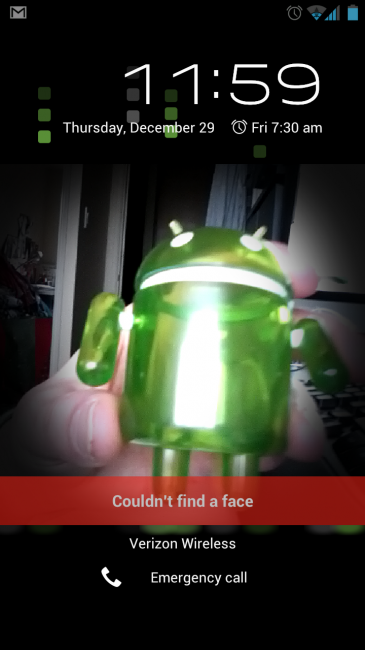 According to Apple patent investigator Patently Apple, the Cupertino based king of patent trolling has filed for a new facial unlock detection patent. Seriously, Apple? You don’t even have facial recognition technology out to the public yet, but your competitor does and you file for a patent on it? I mean, come on. We get that you hate Android with a passion, however, this just looks pathetic.

If you glance over the fancy little stick-figured depiction of this new technology, you will see that it matches up almost perfectly to what the same feature does in Android 4.0 (Ice Cream Sandwich). Let’s see, it says that the device will look for eyes and a mouth in normal locations, analyze weight differences, and then unlock if it matches up to the one on file. Yeah, that’s exactly how Android’s face unlock works.

Update:  According to Engadget, Apple actually filed for this patent back in June before Android had unveiled their Face Unlock and is just now being disclosed to the public. It should also be noted that Google purchased a facial recognition software company around that same time. Tough to tell if that company has any patents for their software or not. Ahh the patent wars – can they be anymore obnoxious?  (Cheers Dave!)

Update 2:  A reader who says that he is a patent attorney has weighed in through the comments. Both of his remarks are worth a read, one of which we have pasted below. You can find them here and here.

I am a patent attorney specializing in computer hardware/software,  telecom, mobile computing, etc., as well as a DL fan and reader. i see a lot of confusion about a number of items here so i want to clarify a few points that are clearly being misunderstood:

1. the shift from ‘first to invent’ to ‘first to file’ has nothing to do with prior art. no patent will ever be valid if there is publicly available prior art that has made the invention known to the public before the patent filing.  The only difference arises in a case where A invented something before B, but B was quicker to file his patent application.  Under the ‘first to invent’ doctrine, if A can prove that he invented first, he will receive the patent even if he filed his patent application later.  first to file changes this, whereby it doesn’t matter when you came up with the idea – only when you filed the patent application.

2.  no one (including apple) can simply get a patent on an ‘idea’ without (a lot) more. i can’t just patent the idea of ‘unlocking a phone with face recognition.’ in order for a patent to be valid, it must ‘enable’ the invention. in a nutshell, that means that there must be enough detail for someone else in the same field to be able to read the patent and understand exactly what the invention is, how it works, and how to make it.  abstract concepts are not enough – there must be concrete examples,steps,etc., which spell it out (here, likely a series of algorithms).