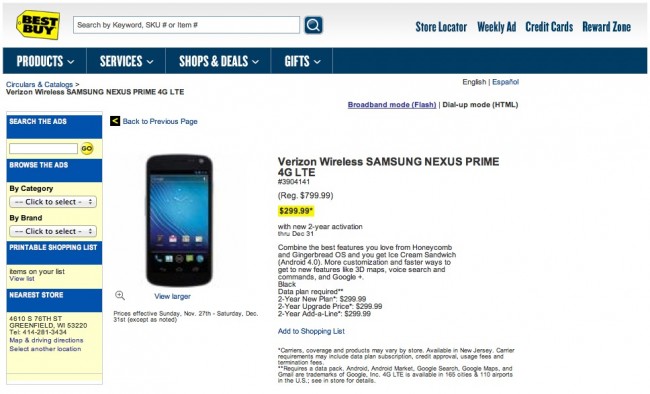 Best Buy and that damn Nexus Prime 4G LTE name. They have reportedly issued a correction to their employees that the name is officially Galaxy Nexus, in case some of you were wondering. So please, continue to refer to it as “Galaxy Nexus” just like we have since September.

What’s up with the price though? Is this phone going to be $199 or $299? Best Buy seems to think $299, but again, we saw ads just 2 days ago from Verizon suggesting that the phone could be $199. We are starting to wonder if there will end up being 16GB (for $199) and 32GB (for $299) models, thus the difference in price. The only problem with that theory, is the fact that Google only lists the phone as having 32GB of storage on their Nexus landing page. But again, the Euro-unlocked G-Nex is only shipping as a 16GB model, so we know those exist too. Ahhh, confusion.

I do want to remind you to ignore the full $799 price that Best Buy is listing. It won’t be that expensive through Verizon. Best Buy has to sell phones at higher full retail prices to hopefully get you into a new 2-year deal. These companies make all of their money by getting you into contracts, not selling you phones. Expect that to be around the $649 mark that we have seen for the RAZR and Rezound.

And as far as the price being “effective Sunday, Nov. 27th,” I wouldn’t look into that too much. It probably means that Best Buy was expecting this phone to be ready today, just like we all were including Verizon, only that hasn’t happened as the phone is still going through testing. December 8 is still the current target to our knowledge.

Hang in there if you can. I’ve had the unlocked GSM version for 3 days now and am loving every minute of it. There may be some killer deals on other phones out there, but you would be wise to at least wait until this phone drops and play with them all.