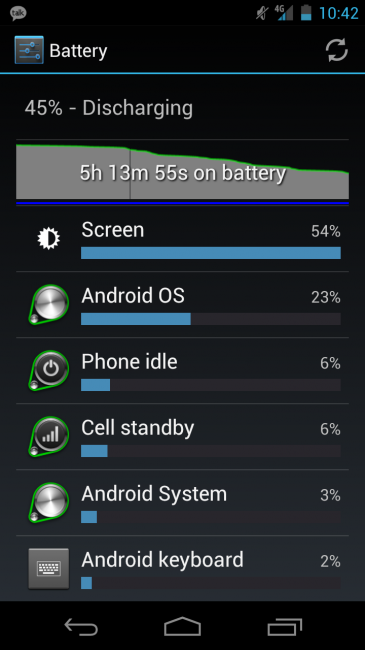 According to the screenshot above, along with its owner, the 4G LTE version of the Samsung Galaxy Nexus is getting much better battery life than I think any of us expected. After more than 5 hours of heavy (“lots of surfing” and brightness at max) of use, you can see that the device still has 45% left on it. For having a 4.65″ HD screen with an LTE chip in it, I’d take that any day. Most 4G LTE phones are begging for a charger after 5 hours of even moderate to low use, so this is potentially a good sign for those of us that were already contemplating the purchase of a yet-be-announced extended battery.

This device test was also reportedly done on LTE only.

Update:  Same source that posted this screenshot is saying that over time, his battery has actually gotten slightly worse. On average, he is hitting around 6 hours. Here’s to hoping we actually do get a bigger 1850mAh battery in it.

On a semi-related note, seeing a screenshot with a 720p resolution makes me smile. Can you believe that we are about to embark on a journey that includes an HD screen in the palm of our hand? And not too far off are quad-core processors behind them.

Soooo, does that make your battery concerns less frightening?

Cheers guy who many of you probably know that asked to remain nameless for some reason!