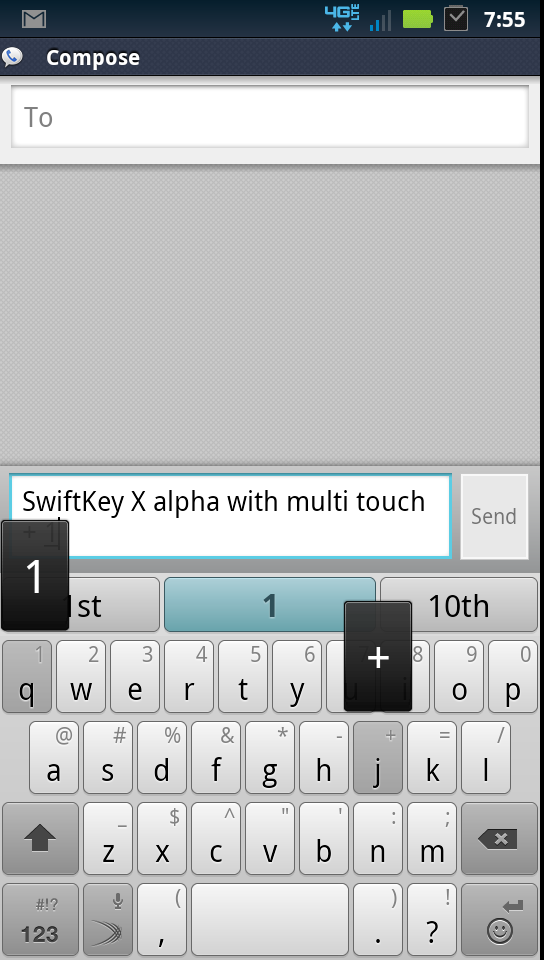 I woke up this morning to a surprisingly lovely email from Swiftkey about a new feature that they are testing in an alpha version of their X keyboard. Multi-touch anyone? As someone that hammers away on his on-screen keyboard at a rapid rate, being able to touch the screen with both fingers at the same time and still produce results is beyond needed. And as one of my favorite keyboards of all time because it always seems a step ahead my sometimes slow moving Pacific coast time brain, this new feature is going to be incredibly huge once they get all of the bugs worked out.

Over the next few days, we would greatly appreciate your participation in Alpha testing our latest update to multi-touch functionality. This version is an Alpha, so we would advise against using it as your primary SwiftKey keyboard. However, your feedback will assist us in refining the SwiftKey experience for the betterment of all of our users. We’d appreciate if you could take some time to give this Alpha a thorough test.

We have made improvements for rapid typists. We now properly support multi-touch so you shouldn’t get accidentally repeated letters or accidentally missed letters when typing at speed with more than one finger. If you could try this out and in particular look out for issues with long-press keys, alternative character selection or keys where the highlighting gets stuck. We are particularly interested in results from tablet users touch typing as well as phone users with two thumbs. When reporting if you could be as descriptive as possible about exactly what you do to create the problem otherwise it will be very hard for us to fix it.

So this “alpha” is only for members of their VIP program which means that not everyone will get to test it. If you are a part of Swiftkey’s testing program though, you will want to check your email or at least jump into their forums to get the file. It will be up for two weeks – go get your testing on.