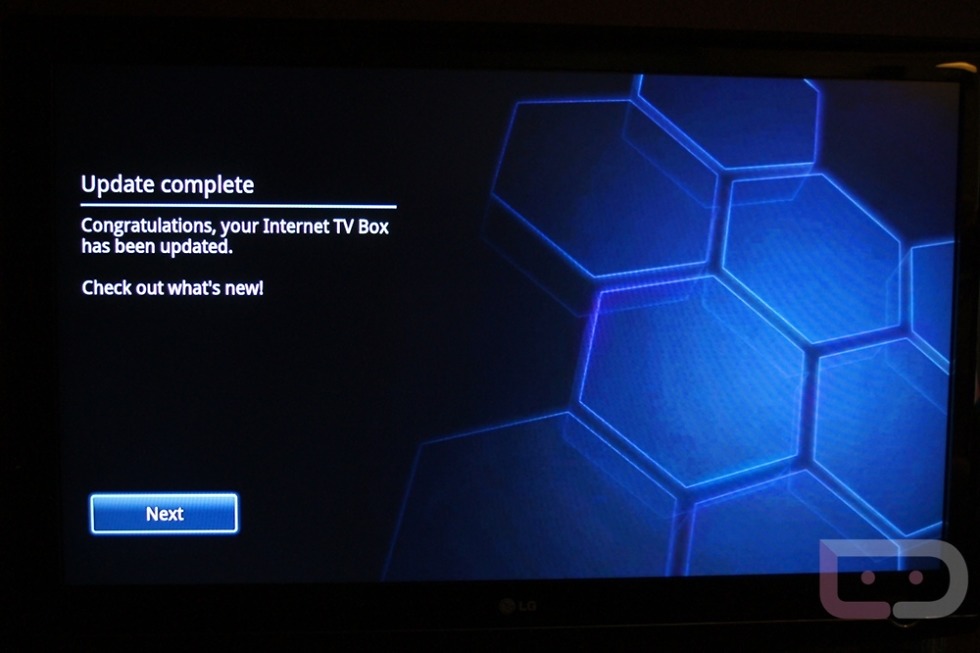 The Honeycomb update for Google TV started rolling out to Sony TV units on Monday and is just now popping up for Blu-Ray units. Since we have the Blu-Ray version, we are just getting to it and wanted to toss out this quick gallery of some of the first things we noticed. So far, this update looks like it may blow past most of our expectations. In just a couple of minutes with HC for my TV, I can easily say that it has become useful for the first time in months. Things like the “TV and Movies” app and Android Market are essentially game changers in my opinion.

Jump on past the break to see what’s new.

Whenever you press the “Home” button on your remote now, you get to the image on the left. It’s a quick shortcut menu of sorts that lets you jump into some of the more popular apps like “TV and Movies,” Netflix, the Market, and Chrome. With a simple click though, you can jump right into your entire app drawer. Everything is easily accessible in Honeycomb.

Ahhh the Android Market on your TV. Does it get better than this? So far, there are just a handful of apps that I have had zero chance to explore, but can say that installation, search, and launching of them is super easy. It’s just like the market on your tablet or phone, but with a black background. One cool thing I noticed, was when you click install and jump out of the market, you get a notification progress bar on screen until it is done.

Favorite feature by far. “TV and Movies” makes it ultra-easy to find your favorite shows and movies, tells you when they are own, and even lets you watch them instantly through things like Amazon and YouTube. You know if they are showing in HD, get to see descriptions of each episode, and can sort by category (comedy, drama, etc.)

YouTube was given a massive makeover. Simple searches, new on-screen controls, HD sorting, and so much more were added.

Haven’t found a ton of differences in the browser, but will have to assume that it’s at least stable unlike the previous versions. New menus give you more options to tweak and play with, and my settings from pre-Honeycomb all seem to have been carried over (bookmarks being the big one).

When apps are installed, your newly introduced inbox is filled with a notification for it. From the “Home” screen, you can access your notifications in the far left corner along with your most recently used apps.

I’ll have much more time tonight to dig deeper into this latest update, but so far am very impressed. The hardware side of things could use an upgrade and I would not call it “fast” by any means. Hopefully the GTV team has made enough software tweaks to make that a non-issue.