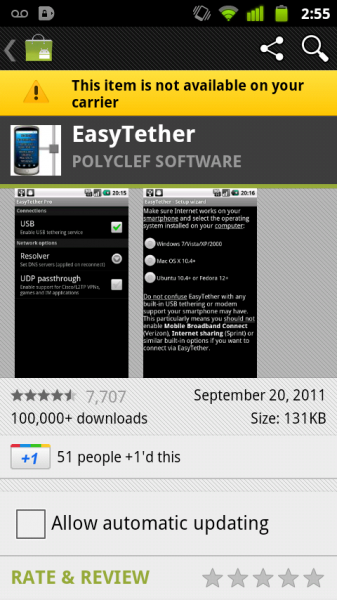 Back in April, we discovered that Verizon was starting to block apps that they deemed to be unacceptable or that violated contract terms.  Tethering apps were the first and most noticeably removed, but what if the situation is deeper than just blocking?  What we mean by that is, what if you bought (yes, used your hard-earned money) an app that they are now blocking?  Can you no longer receive updates to that app?  What if you change phones and go into the market to load up everything that you had previously purchased? Are those blocked apps no longer available?

It’s an interesting (more like painful) conversation that should probably be made much more public than it is as of right now.  What started this latest round was the screenshot you are seeing above from a Reddit user who went into his market to update EasyTether only to be welcomed with the message in yellow.  He is unable to load the latest update to the app because his carrier (Verizon) will not allow it.  Now, EasyTether is a $9.99 app that he paid for, but that he is no longer allowed to use? Yikes.

There is a work-around though, as if to soften some of the blow.  If you flip your phone into Airplane mode and then turn on wifi, you should be able to update.

On a related note, how about free WiFi tethering on the Bionic?

So, in an attempt to dig further into the situation, I pulled up as many of the activated phones I have and came up with varying results on the blocked app market front.  My Bionic (which is rooted only) is able to see every single app known to man, though.  I even installed Wireless Tether straight from the market, however, Verizon has a sneaky new way of tying it into the built-in wireless tether app in Android which needs a work-around in order to work. The video below will get you up in no time (root required):

*Note – we have no way to tell if Verizon is still able to check your tethering usage after doing this, so do this all at your own risk.