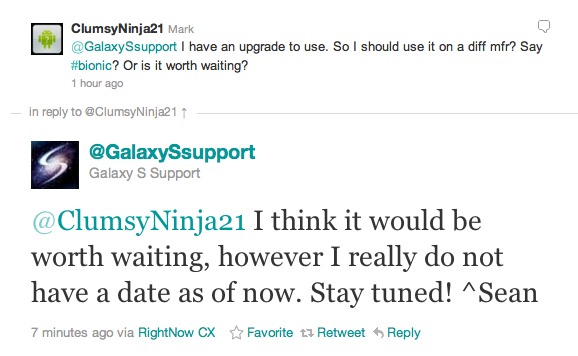 We are totally going hypebeast on this post, there is no getting around that, so take it as that and nothing more.  But what we have above is a quick Twitter conversation between one of our buddies and a Samsung support rep.  Our friend @ClumsyNinja21 has been asking over and over again why Verizon was skipped in the Galaxy S II launch and if there would be something to make up for it in the near future.

Well, after not hearing much of a response for a solid day, he did get one this afternoon after dropping the idea of picking up the DROID Bionic instead of waiting and hoping that Samsung eventually delivers something.  The support rep was pretty clear in that he thought it would be worth waiting, but that he doesn’t have a date.  Wait, date for what?  I didn’t think Verizon had plans for anything beyond the Bionic?  Anyone remember an announcement of any kind on the Samsung/Big Red front?  (Anyone else grinning?)

Again, take it for what it’s worth…could be nothing.  Just wanted to share.

*Side note – And folks, let’s return to being civil with each other.  Remember, we all love Android because it gives us choices.  Just because someone wants to choose this device over that device does not make them wrong.  Let people make their own decisions, whether you believe those are wrong or not.  It’s all about happy times in the land of the green robot.