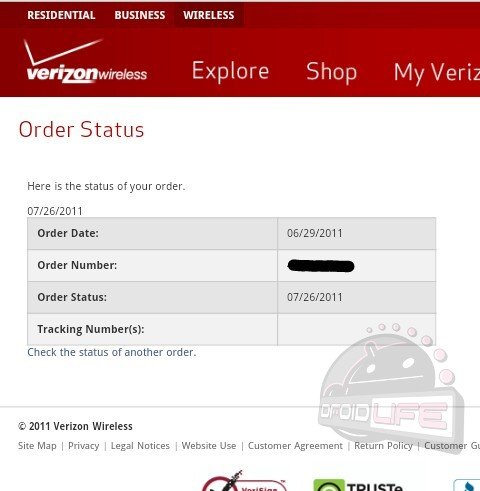 The 4G LTE version of the Samsung Galaxy Tab 10.1 on Verizon has gone through one of the weirder release periods in recent memory.  First, it was announced with a pre-order date instead of a release date.  It quickly missed that pre-order date though without mention from Big Red, but soon found another period for people to order it early – all without an official release date.  Then stores started receiving massive Galaxy Tab 10.1 displays, but again, no mention from anyone as to when the device itself might arrive which had us hoping for this week (clearly that did not happen).  And now we have this, from one of readers.

Is this new July 26 shipping date a sign that the device will finally launch next Thursday July 28?  If the plan is to have pre-orders begin shipping by next Tuesday, you would have to think that the device will be available to all just a couple of days later.  And of course, we all know how much Verizon loves launching things on Thursdays.

Oh, they also mentioned in their Q2 earnings call today that the device “is expected to launch by the end of this month.”  So I’d say next week is almost guaranteed.