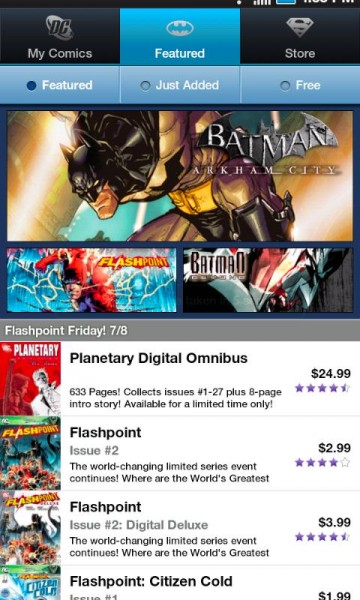 Batman fans, get ready for the awesome – DC Comics has unveiled their new Android app that includes over 3,000 issues from their library.  Titles will be available for $.99 up to $2.99 and are cross-platform accessible, so you don’t have to continue to buy them over and over again.  They partnered with comiXology to get the app put together in time to make this splash before Comic-Con.

07.19.2011– NEW YORK / BURBANK, Calif., – Just in time for San Diego Comic-Con, DC Comics and comiXology have partnered to create a DC-branded app for the Android platform that is available starting today. Already one of the most popular digital comics publishers, the new app for Android users brings DC’s extensive line of the world’s greatest super heroes to an even broader mobile audience.  Additionally, DC Comics purchased via apps powered by comiXology are accessible across different platforms so customers can access a comic purchased once on the iOS and the Web as well.

“This launch is another great milestone in our digital strategy,” stated Hank Kanalz, senior vice president of digital for DC Entertainment. “Our goal is to make DC Comics available to the broadest audience possible and this Android launch extends our reach among mobile phones and tablets. We want our readers to enjoy comics whenever and wherever they want, be it at home, work or while walking around San Diego Comic-Con.”

The Android app will offer more than 3,000 issues from the DC Comics and Vertigo libraries, priced from $.99 to $2.99 per issue.  The hugely popular $.99 sales will also apply to comics sold via the DC Android app.

“DC has really embraced digital as a strategy to ensure that their readers will be able to enjoy their comics whenever they want,” said David Steinberger, CEO of comiXology. “The launch of the DC Comics App for Android shows their continued commitment to their amazing community as they continue to broaden their digital horizons.”

The DC Comics app for Android will leverage ‘Google In-App Billing system’ to streamline the purchasing process for any comic fan by providing users the ability to include their billing information directly into the app at the point of purchase through the Android Market billing service. Users will also have the option of paying via Paypal as well.

About DC Entertainment
DC Entertainment, home to iconic brands DC Comics (Superman, Batman, Green Lantern, Wonder Woman, The Flash, etc.), Vertigo (Sandman, Fables, etc.) and MAD, is the creative division charged with strategically integrating across Warner Bros. and Time Warner.  DC Entertainment works in concert with many key Warner Bros. divisions to unleash its stories and characters across all media, including but not limited to film, television, consumer products, home entertainment, and interactive games.  Publishing thousands of comic books, graphic novels and magazines each year, DC Entertainment is the largest English-language publisher of comics in the world.

About comiXology
Since 2007 comiXology has been developing the technological infrastructure to bring comics into the digital mainstream and expose new audiences to the rich history and culture of the industry. Through partnerships with top comic book publishers including Marvel Comics, DC Comics, Archaia Entertainment, BOOM! Studios, Dynamite Entertainment and Image Comics as well as their own mobile and web apps which hosts over 10,000 digital titles, comiXology has become a leader in digital comic book proliferation. Also focused on creating strong ties with retail stores through its technology solutions, comiXology continues to transform the previously fragmented comic ecosystem into a vibrant and cohesive marketplace.