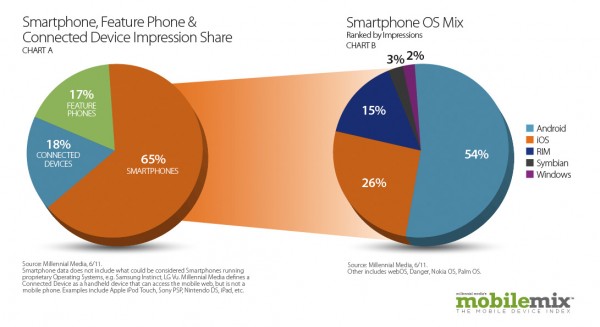 These reports have become a little redundant since Android took the top spot in smartphone OS share some time ago, but this latest Mobile Mix from Millennial Media had enough goodies included to make it worth sharing.  With Google’s approach to allowing its operating system to be used by phone manufacturers for free, there appears to be no stopping it even if random tech pundits insist that the i*hone 5 will end its reign just like they said with version 4.  For the 7th straight month, it topped the U.S. smartphone OS charts with an astounding 54% share.  The next closest was iOS at just 26% making this not even a competition to be talking about anymore.

We did find it interesting that the original DROID managed to sneak into the top 3 for smartphones after almost 2 years of service though, followed by the Nexus S as the next highest Android device.  People are still showing love for the phone that helped launch all of this growth, and that makes us smile.

More info can be found at the Millennial Media blog.