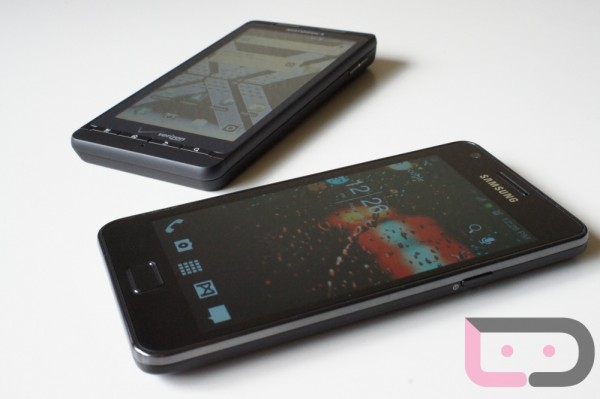 As many of you know by now, we picked up a Samsung Galaxy S II to try to understand the massive amounts of hype that this device has seen even though it has yet to land in the U.S.  We walked through a quick hands-on yesterday, but wanted to come back today and fulfill some reader requests which called for a string of benchmarks to be done.  And since we happen to have a DROIDX2 handy, we thought it would be a great dual-core competitor to match it up against.

Here are the results we came up with after running SmartBench, CF-Bench, Linpack, Quadrant Standard, Neocore, and Nenmark1 a number of times on both devices.

(All images can be clicked to see larger versions.)

(Galaxy S II will be on the left in each set.)

We’re not about to claim to be benchmark gurus by any means, but there is something pretty evident here, and that’s the fact that the Galaxy S II is wiping the floor with the DROIDX2.  (The SGS2 that I’m in possession of has a 1.2GHz dual-core Exynos processor and the DX2 as you all know is running NVIDIA’s dual-core Tegra 2.)  One thing I will note though, is that the DX2 is still running Froyo (Android 2.2) and a ridiculously buggy version of MotoBlur, so I wouldn’t be surprised if these numbers jumped up quite a bit after it receives Gingerbread (Android 2.3).  That’s all speculation of course.

And now we await the arrival of the DROID3 and it’s dual-core OMAP to see if it can stand up to this beast that Samsung has produced.